Good-bye May, hello June (and Sue)

Our friend Sue from California is scheduled to arrive today for a two-week stay. She's flying in from Slovenia, where her tour of the Balkan states ended. She's flying to Paris CDG airport this morning, and then taking the high-speed TGV train down to Tours — if all goes well. I'll drive over to Tours and pick up up at noontime. We've been friends since 1975 — we met in Paris that year — but we haven't seen each other in 12 years now. Sue, Walt, and I became really good friends during the years when he and I also lived in California (1986-2003). 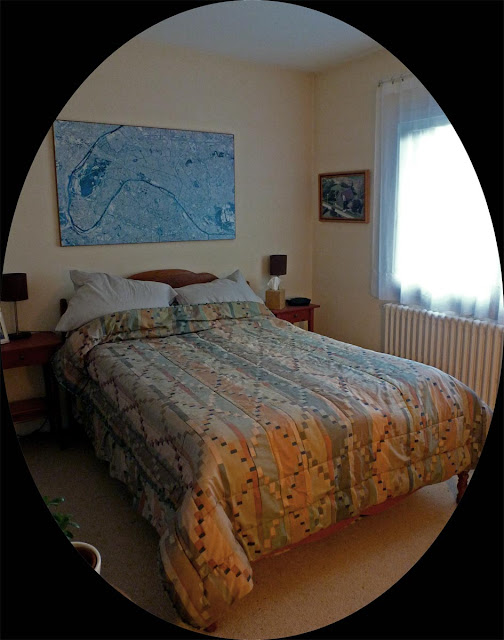 This is the room Sue will stay in at our house. It's a fairly small bedroom, and it was the first room we refurbished when we moved here in 2003. The house had stood unoccupied for years when we bought it, and humidity and age had taken their toll. In this bedroom, ugly old wallpaper was hanging in strips from the walls, unstuck by moisture. The floor was austere, cheap-looking asphalt tile. We pulled all the wallpaper down, sanded the walls lightly, and painted the walls and ceiling. We contracted with a company to come put down carpet over the old tile. The paint job and carpet are still in pretty good shape, but it's definitely time to redo the room.


We slept in this room from 2003 until 2010, before we had the attic space finished off and moved our bedroom upstairs. This 1960s-era house is like many French houses and could even be compared to a large Paris apartment. The rooms are small, except for the living room and the bathroom. The two bedrooms are tiny, and in the whole house there was only one closet when we moved in. The people who had it built came here from Paris and this was to be their retirement home, but they never really lived in it. She died in 1976, and he moved into an apartment in Saint-Aignan, keeping the house as a place to come and spend some summertime weeks "in the country" — two miles from town.


The bed you see here is one that my mother found at a garage sale back in the mid-1980s. Walt and I were living in Washington DC. We drove down to my mother's in North Carolina, saw the bed, and decided to sand and refinish the headboard and footboard. We did the work in my mother's garage, and when we finished she offered the bed to Walt as a gift. We've had it ever since. We brought it to France in 2003. Sorry it's kind of hidden by the comforter on it, but here's what the room looked like in 2010. 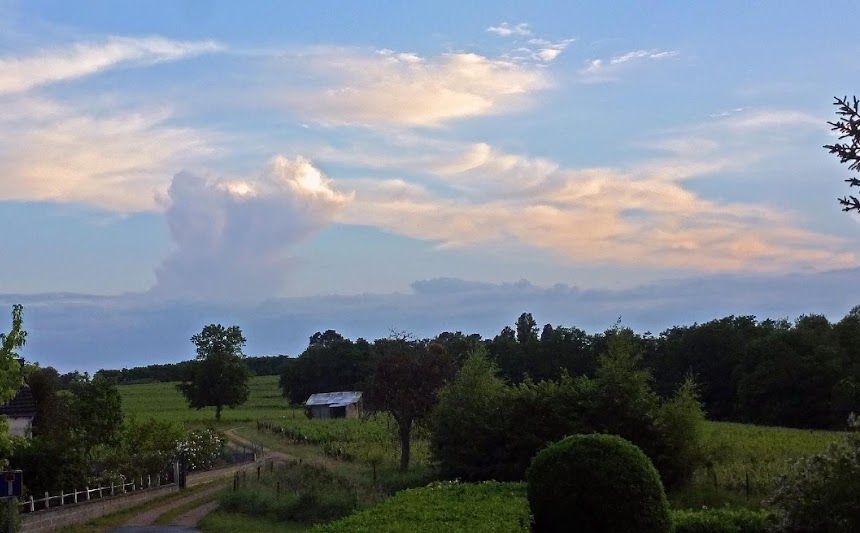 The room has a good view of the back yard and vineyard. It faces west, so you don't have the sun shining in your eyes when you wake up in the morning, but the afternoon sun can make the room bright and cheery.

In past years, we've done a lot of touring around with Sue — Yosemite, northern California, Utah, the Loire Valley, Paris, the Dordogne, Provence, the Mont Saint-Michel, etc. And we are going to be fairly busy for the next two weeks, though the years have slowed us down slightly. On the schedule now are the gardens at the Château de Villandry, an hour west of Saint-Aignan. Walt wants to take Sue to Versailles; she's been there before, back in the 1970s with me, but maybe not since. It's two or three hours north of here. The city of Bourges, its cathedral, and the nearby Cistercian abbey of Noirlac are another possible destination. It's only about 90 minutes east of Saint-Aignan. There's a picture of Sue and Walt in this post about our Dordogne trip in 2006 and the beautiful town of Collonges-la-Rouge.
Posted by Ken Broadhurst at 06:30