Today. What a complicated word that is in French. Actually, the part that means "today" is hui. But because that word got so short through phonetic erosion, it needed more substance. So people speaking French tacked au jour de on the front, and they ended up with "on the day of today."  Aujourd'hui. Sometimes you hear people say, for emphasis, au jour d'aujourd'hui. "On the day of the day of today." Whew! 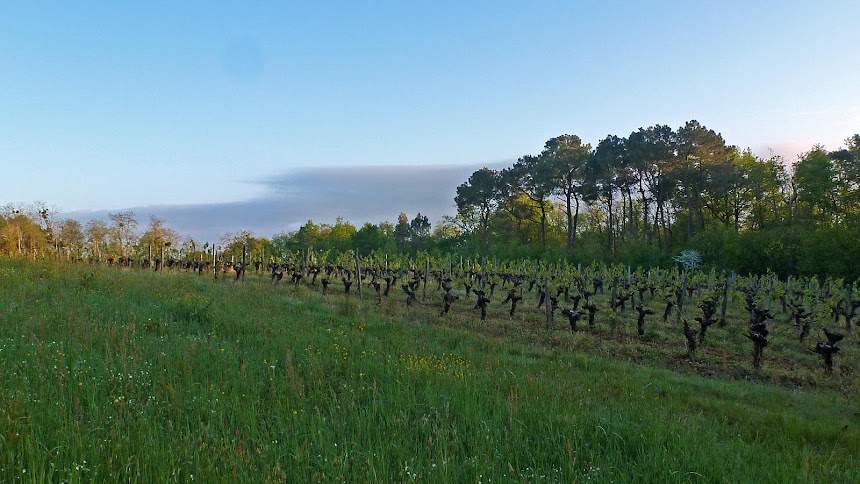 The easternmost and lowest of the parcels in the Renaudière vineyard


So what's going on here on the day of today? Well, Walt's going to the Saturday open-air market down in Saint-Aignan (2 miles from here) to see if he can buy some asparagus and some strawberries, both of which are local specialties. Later today, I'll be cooking those saddles of rabbit I mentioned yesterday, for Sunday's lunch. 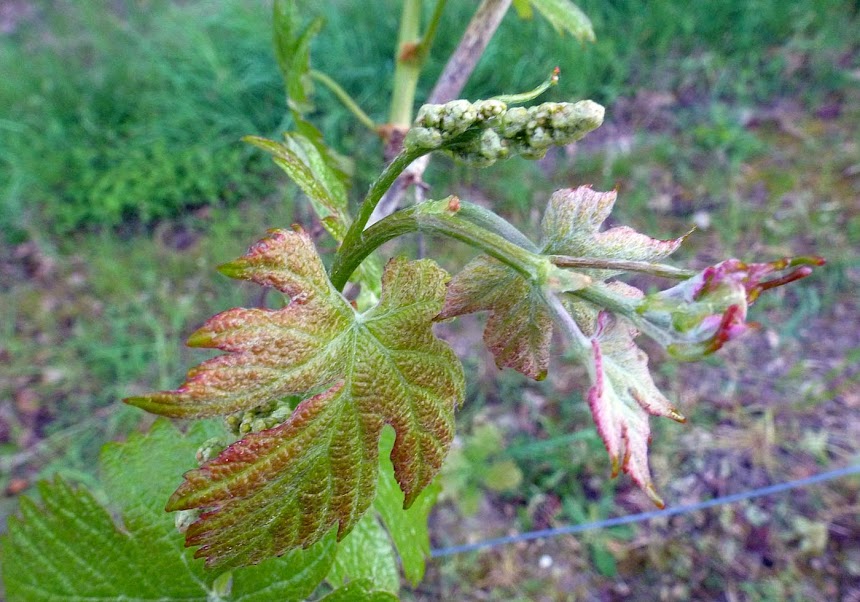 Grape leaves and a grape flower


I asked Walt to look for a couple of tomatoes at the market too, because were going to have a lunch of smoked salmon (trout, actually), lettuce, and a very French salad called céleri rémoulade, made with grated celery root a.k.a. celeriac. Tomatoes would round out the menu. 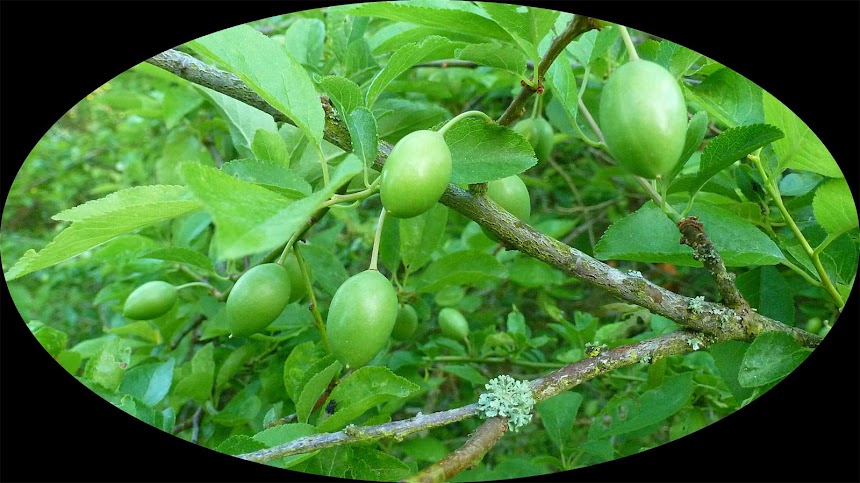 I can't wait for these little plums (prunes) to turn red and ripen.


Meanwhile, I'm going to stay home and do some baking. After I walk the dog in the vineyard, of course. What I'm baking is called pain de mie. I'm not sure how to translate that. "Crumb bread" is one possibility, but that's too literal. The mie is the bread minus the crust (la croûte). The dictionary says pain de mie in English is called "sandwich bread." It's what bread is in the Anglo-Saxon world, as opposed to "French bread" — baguettes, bâtards, boules, etc. — or, for example, cornbread or sourdough bread. 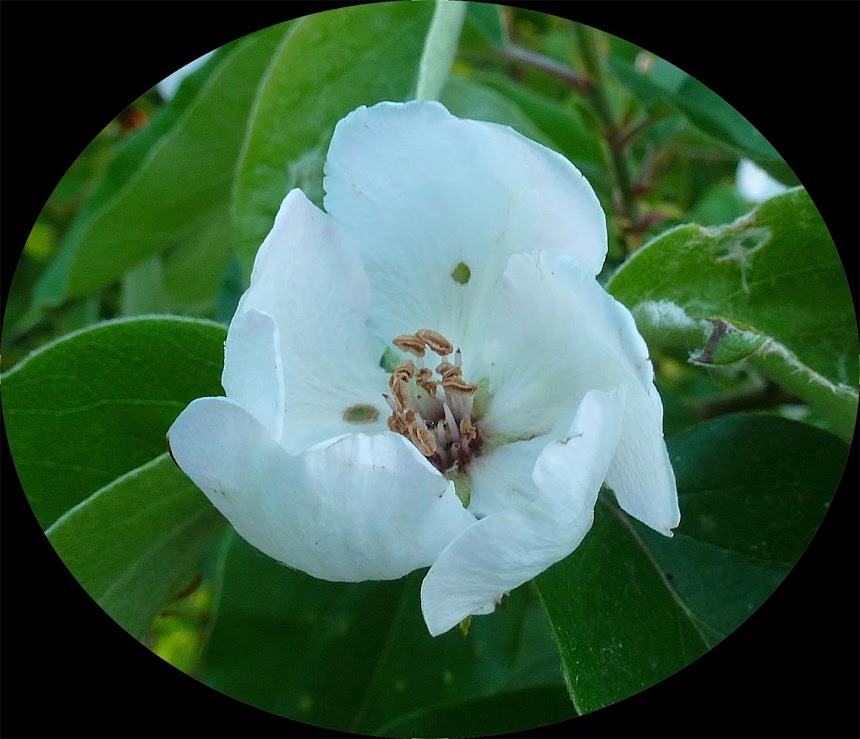 A flower on a quince tree (cognassier) in the neighbors' yard


Why make sandwich bread? Mainly, it's because I don't really like the loaves of that kind of bread that I find at the supermarket. A lot of French boulangers (bread bakers) make fresh sandwich bread and sell it in their shops, but not very many bakers around here do. The baker in our village doesn't make pain de mie at all. One baker in Saint-Aignan makes a couple of loaves on Saturdays, but it sells out really fast. The woman who runs a good boulangerie over in Noyers, across the river, told me that pain de mie is a specialty item that has to be ordered in advance. 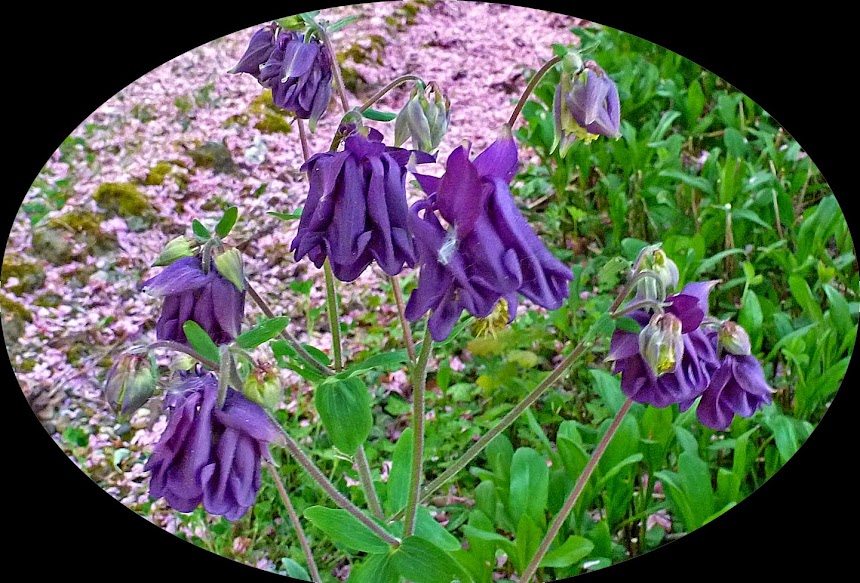 
Instead of ordering the bread, I ordered a special pan for making pain de mie, and it arrived a couple of days ago. I'm going to try it out this morning. It is a metal loaf pan (un moule à cake in French) with a metal lid and it's got a non-stick coating on the inside. It's supposed to a make a squared-off loaf with a flat top. I'll take some photos. The photos in this post are just some things I've noticed recently on walks around the hamlet (neighborhood).
Posted by Ken Broadhurst at 07:00