Yesterday I mentioned that my whole series of experiments in baking sandwich bread started because I wanted nice toasted slices to have with the mousse de foie de lapin that I had made. Well, that was part of the story. The other part is that our village baker decided a few months ago to end door-to-door bread deliveries in the area. 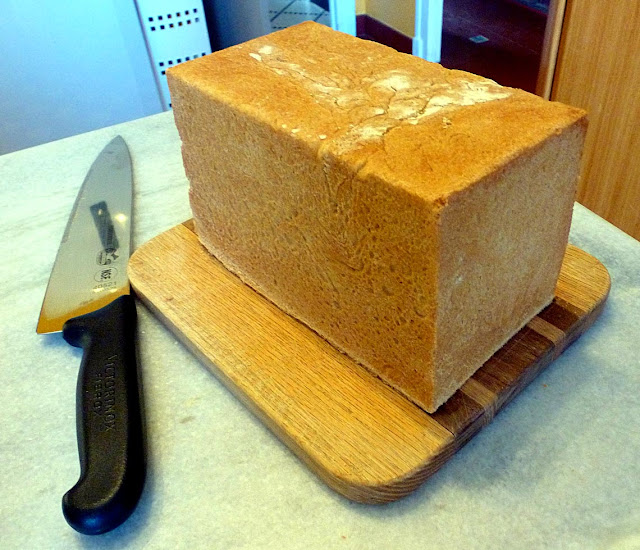 When we first came here to live here 15 years ago, the bread lady — la porteuse de pain, in French — would drive by five days a week, honk the horn, and wait for us to come out and buy a loaf of bread, or a few croissants, or even some butter, cheese, or milk, which she also carried in the van. A few years later, a new baker arrived and cut the service to just four days a week. Then again another new baker took over the boulangerie, and he cut the service to three days. Now it's been done away with entirely, except for people with "mobility issues" — a disability, old age, or no car — who can order by phone in advance and receive deliveries. 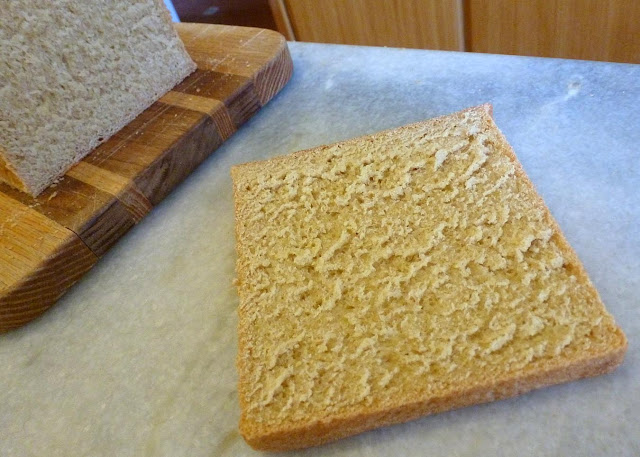 One day, years ago, I asked the porteuse de pain at the time if our baker made and sold pain de mie. She said no. She got out of the van and went around to the back. She opened the doors and handed me a loaf of factory-made sandwich bread in a plastic bag. She said that was what people bought when they wanted pain de mie. I tried it, and I didn't think it was good at all. The slices were tiny, and the bread was dry and crumbly. I could get better loaf bread at the supermarket.

When our bread deliveries ended, I started looking around in local bakeries to see what new breads I could find — handed lemons, I was trying to make lemonade. There are half a dozen boulangeries withing five miles of our house. One day, back at the beginning of April, I made the rabbit-liver pâté. I happened to go to a good bakery in Saint-Aignan around that time and I noticed, in a glass display case, a beautiful, very long loaf of pain de mie. I made a mental note to go back there are buy one of those one day soon. 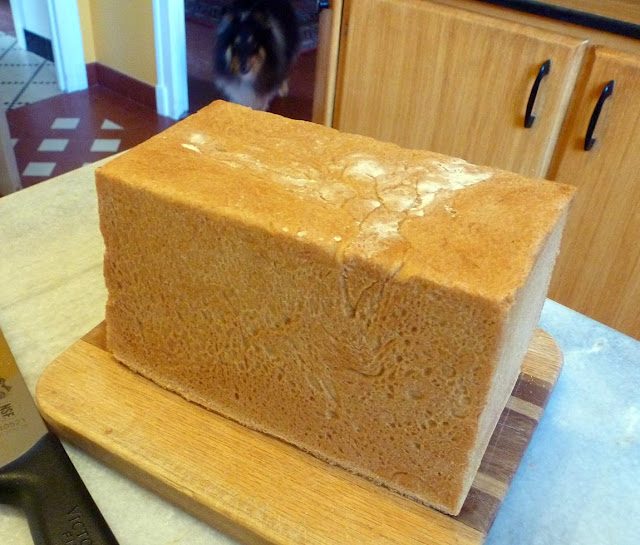 When I did go back and ask about that kind of bread, I learned that the owner-operator of that bakery made a loaf or two of pain de mie on Saturday mornings only. That's market day in the town. The clerk at the bakery said I would need to come in early on a Saturday morning if I wanted some, because it normally sold out almost immediately. She didn't mention ordering in advance, and I neglected to ask. 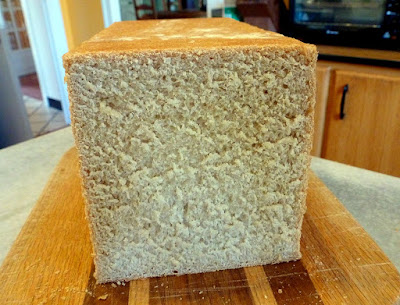 That week, I drove "the boulangerie circuit" and looked for pain de mie in different nearby boulangeries. Only one of the four establishments where I stopped actually had pain de mie available, but I didn't like the look of it. The slices were cut far too thin and they were huge — almost the size of dinner plates. That was over in Thésée, which is a fairly long drive for us. In our village, the clerk at the boulangerie confirmed that the baker still does not make pain de mie. Over in Noyers, the baker whose shop is fairly close to the Intermarché supermarket — where I go frequently — told me that pain de mie was available only if ordered in advance.


So there you go. It occurred to me that I had always wanted to have one of those metal loaf pans with a slide-on lid. The time had come. I ordered one from Amazon France, and it arrived a few days later. I started experimenting. Now I've made
the fourth in a series of loaves in it. I made it yesterday, using about five cups (600 grams) of all-purpose flour, 400 milliliters of warm water, two packets (11 grams) of yeast, a tablespoon of honey, a teaspoon of salt, and about two tablespoons of softened butter in the process. The dough rose nicely, doubling in volume on its first rise, and on its second rise in the pain de mie pan with the lid on it, it actually overflowed slightly. The result was the loaf you see in these photos. 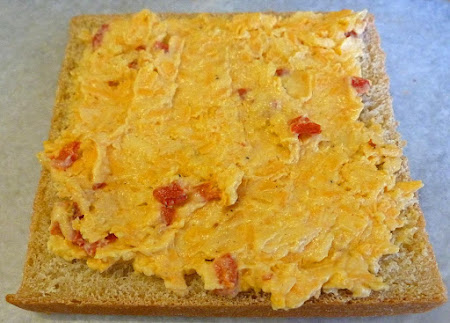 Besides mousse de foie, we've enjoyed eating American-style "pimento cheese" on slices of pain de mie. I made the pimento cheese using aged Gouda and Edam cheeses, both Dutch-made and available at the supermarket. The cheese is grated, mixed with mayonnaise and/or softened cream cheese (fromage à tartiner), and garnished with diced roasted red bell peppers along with salt, pepper, and a little powdered cayenne pepper. Today I'm making a meatloaf (un pain de viande — remember, pain means "loaf") with beef, veal, and pork, and this week, we're bound to enjoy lunching on more than a few sandwiches made with leftover meatloaf.
Posted by Ken Broadhurst at 06:30