Yesterday I started nosing around my desk upstairs, cleaning and organizing. I came across dozens of old CDs and DVDs on the spindles they were on when I bought them, but these had files on them. I don't buy or use recordable DVDs, much less CDs, any more. Instead, I have six external hard disks and dozens of high-capacity SD cards that I store all my photos on, with multiple copies so that I always have a backup in case one of the disks fails. **it happens. 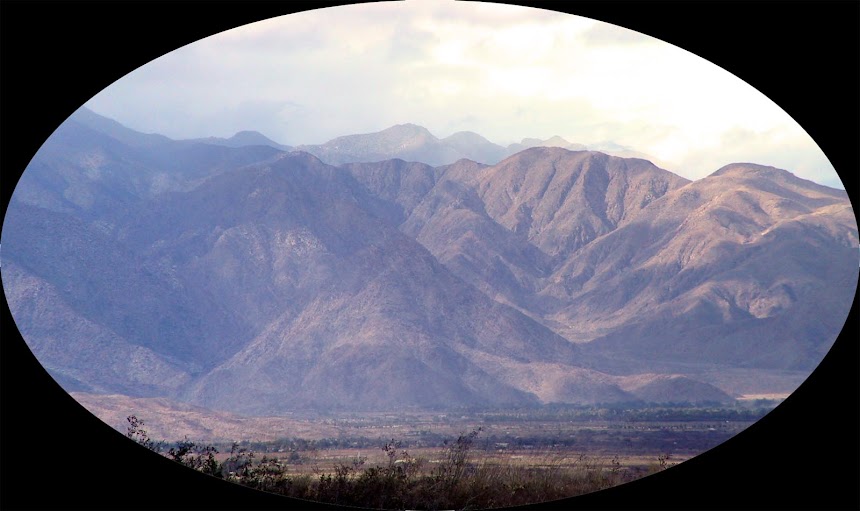 The title I put on this photo is Borrego, so I think that's the town of Borrego Springs you see at the bottom of the image. The town backs up to the mountains to the west, on the other side of which lies the city of San Diego, on the Pacific coast south of Los Angeles.


I looked through dozens of the old CDs and DVDs that I had recorded, and I came across photos from nearly 20 years ago. Back then, our friend CHM, who is now 93 years old, used to spend part of the year in Southern California. Walt and I were living in San Francisco, and though it was a nine-hour drive each way to go down there and back, we would go and spend a few days in the Salton City/Borrego Springs area with CHM every year, or even twice a year. We didn't think much about driving such long distances back then, while the thought of doing that kind of driving today is hair-raising

This is a panoramic view of the Santa Rosa Mountains, with the highest peaks rising up to nearly 9,000 feet (2600 meters). Sometimes in winter they are snow-covered.


I used to take a lot of photos that I could stitch together in Photoshop to make very wide panoramas, and the southern California desert was one of my favorite spots for photography. I got my first digital camera in 1998. Here are a few panoramas that I found on the DVDs yesterday. With captions.

This is an even wider view of the Santa Rosa Mountains. The resort town of Palm Springs is to the north, and San Diego is to the west. I was looking basically west when I took the picture.


I'm posting them in extremely wide formats as a kind of experiment to see if Blogger can display them this way. (It can...) To see them in full size, you need to click on the images once to open them in a new window on your computer or tablet, and then (at least on a PC) click on them again to display them at full size. Then you'll see a horizontal scrollbar at the bottom of the screen that you can use to scroll right and left to pan across the image.

The local canyons were places where we really enjoyed going to walk and take pictures. The one above is called Painted Canyon because of the colors of the sands and rocks there. 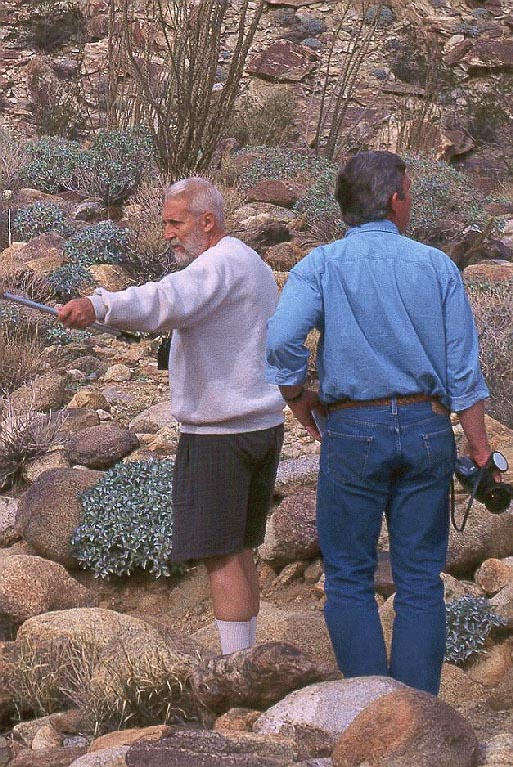 Finally, here's a photo of CHM and me on one of our canyon walks. Walt must have taken it. It's hard to believe that this was nearly 20 years ago, before Walt and I decided to leave California and move to France. CHM still has an apartment in Paris, so we see him here nearly every year.
Posted by Ken Broadhurst at 07:00