Yesterday afternoon we sat out on the terrace/deck/front porch and attempted to enjoy the weather. And enjoy it I did, in a certain way. The temperature out there, on a porch that faces east, has a roof over it, and is completely open to the air, was 37ºC. That's human body temperate, 98.6ºF. It was the hottest day we've had so far this year, and maybe the hottest day we've had since 2003. 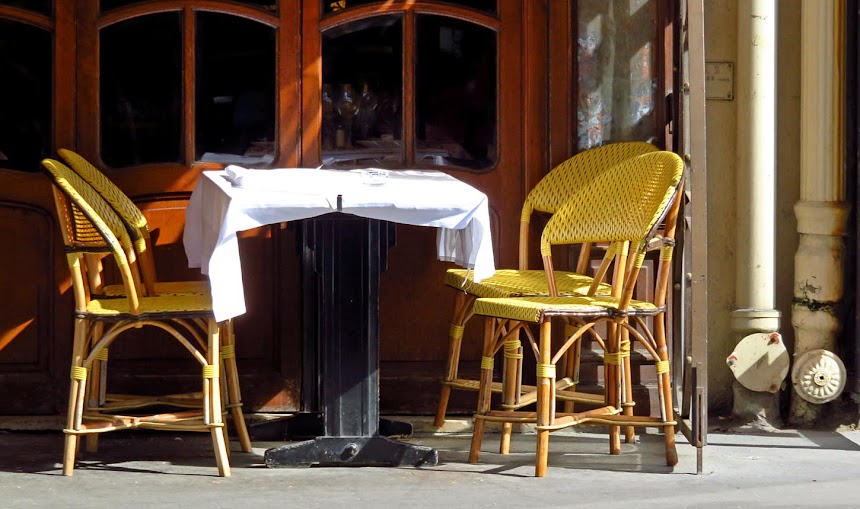 It wasn't so hot on May 30 in Paris, but it was starting to get uncomfortable under the sun out on the sidewalks of the city. I walked through the heart of Saint-Germain-des-Prés, after looking around at Saint-Sulpice, looking for a café where I could sit outside and sip a cold drink. The Flore and the Deux Magots were too crowded. They are also really expensive. 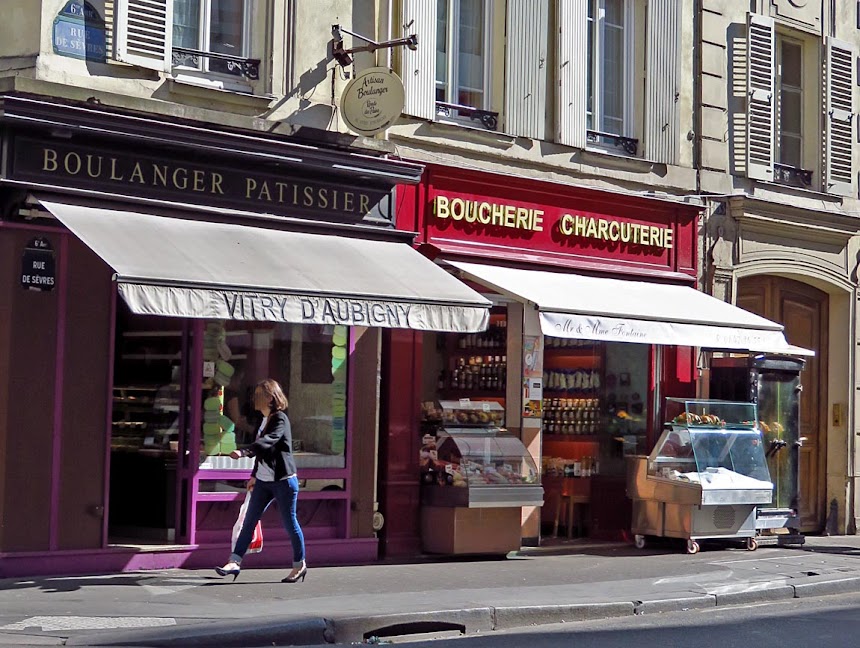 A little further on I found a place where I used to eat lunch all those years ago when I worked on the rue des Saints-Pères and then on the rue de l'Université. There are two pictures of it in this post from November 2014 — it's Le Rouquet and has a white awning these days. It was empty last October, but in May it was packed. I found a table and sat down. I waited 5 or 10 minutes, but nobody ever came to take my order. So I just got up and left. 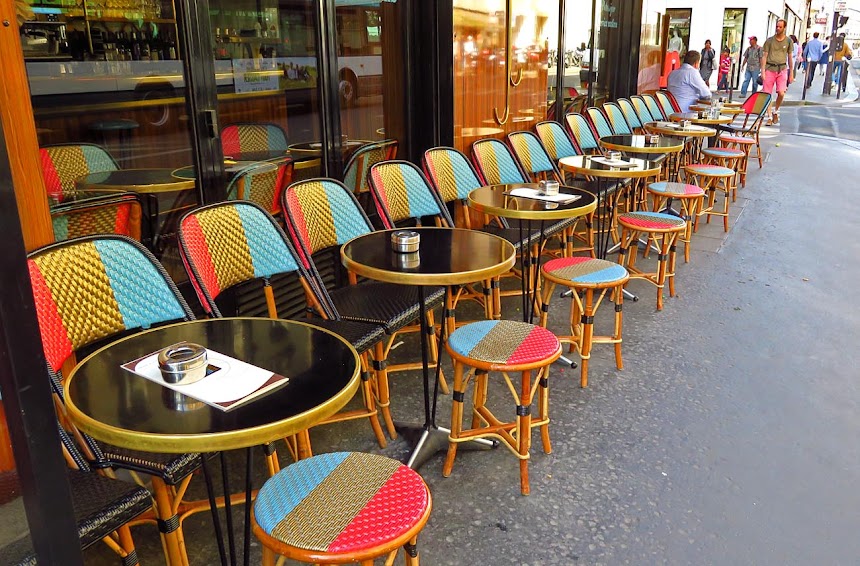 I walked on to the rue de Sèvres, past the well-known café called Le Sauvignon, and then another called  Le Sèvres-Raspail, where I remember having coffee or a glass of wine with Walt back in 1982. Again, every place was packed. On I strolled, until a little way past the Bon Marché department store and the Grande Epicerie grocery store, I came upon the place in the photo above, which was inviting. 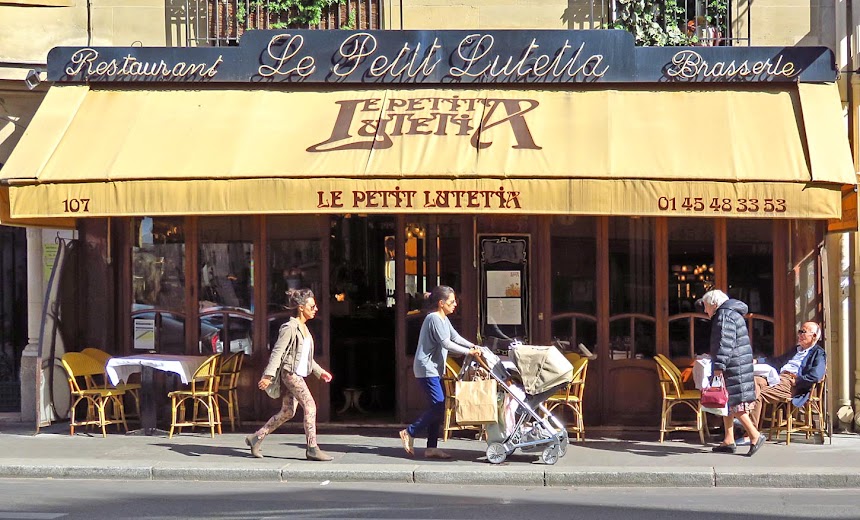 Notice the menu just above the baby carriage, and look at the full-zoom photo of it (below) that I took from across the street.

All the other photos in this post are ones I took as I sat and drank a glass of white wine and a big glass of water at the café, called the ZéroZéro-Sèvres, as I watched people walking by. The photo of the line of empty tables is slightly misleading, because there were some people, including a crowd of Brits with several small children, occupying tables when I arrived, but they had all left just before I did. That's when I took the photo. 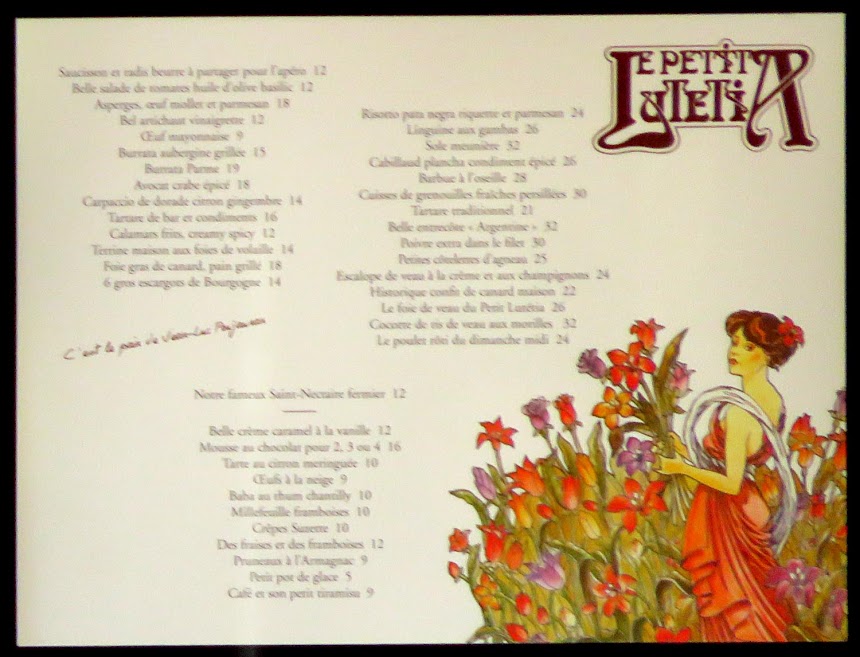 Walt and I have twice stayed in apartments in this neighborhood — in 1999 in a place at the intersection of the rue de Babylone and the rue Vaneau, and in 2002 in a nice apartment on the rue Mayet — so I know it slightly. I enjoyed sitting at my table out on the sidewalk and discreetly (I hope) taking photos of the restaurant and shops across the street. I was still just trying out my new camera (the Canon SX700 HS). I think the photo above of the menu posted across the rue de Sèvres at Le Petit Lutétia is pretty amazing, considering the distance. It's legible if you look at it at full size.
Posted by Ken Broadhurst at 07:30