Pessimism, and some kisses

A lot of French farmers are feeling pretty pessimistic these days. They say they can't make a decent living in the current economic situation. They say also that intermediaries ("middle men") and those who own and run what's known as la grande distribution — the major supermarket chains, basically — are the ones making all the money. And they refuse to pay farmers enough for their products so that the farmers can stay in business. 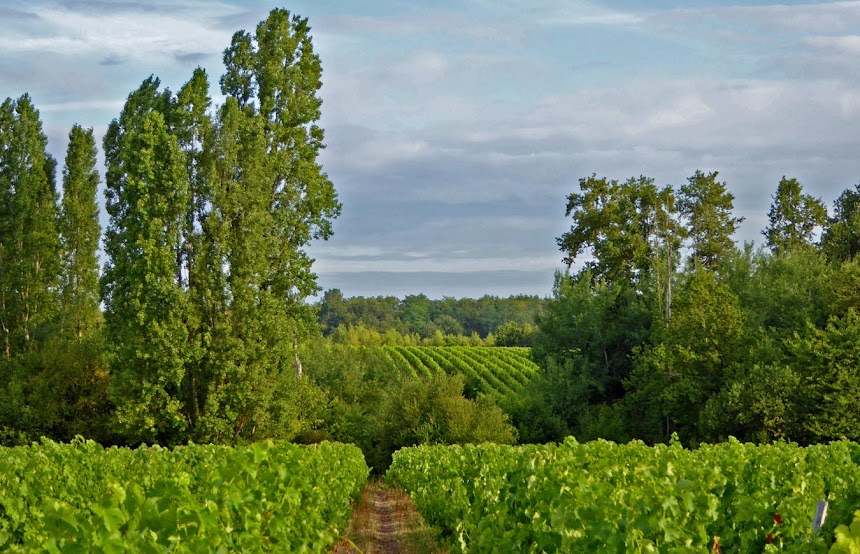 This hot dry summer hasn't helped any, apparently. Big demonstrations by farmers have been all the news for a week or two, especially up in Normandy and Brittany, but also in the Loire Valley. I know just one farmer — he's a man who works out in the vineyard. I talk to periodically — he's very talkative, and fairly interesting. Sometimes his wife is out there working with him. They trim the vines, repair the vineyard support posts and wires, and do whatever it takes. Their main business is céréales — grains, including corn, they've told me. The vineyard work must be just a way to make ends meet. 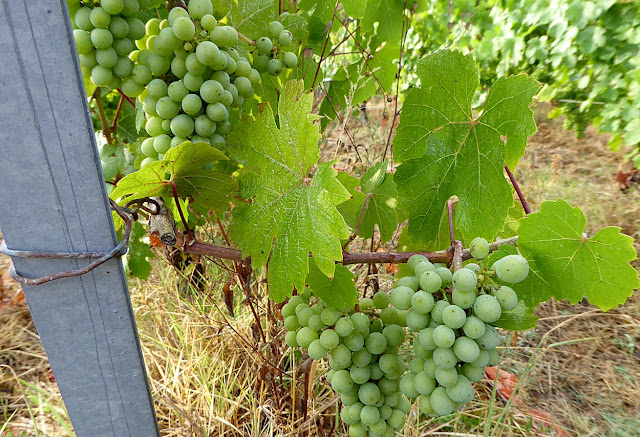 Yesterday morning when I went out walking with Callie, somebody on a tractor/trimmer was working in a plot of vines up near the top of the vineyard, clipping off the tall top vines that don't bear any grapes. I couldn't see who was in the cab of the little tractor, and Callie gets nervous around farm machinery. We were just walking on by, but I waved my hand toward the tractor, in case the driver was somebody I knew and who knows me. 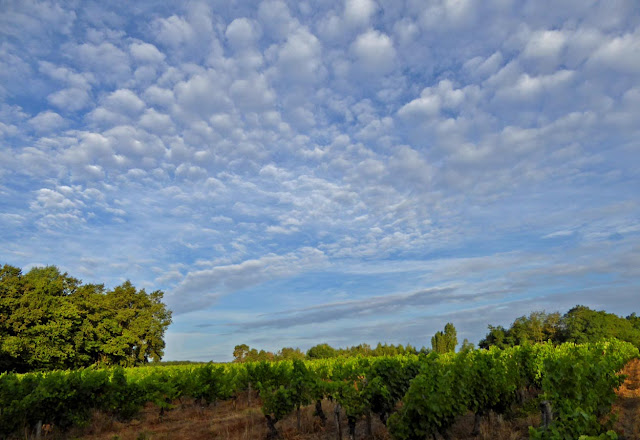 Well, it was the moonlighting grain farmer. As the tractor got closer to me and the dog, I recognized him and his big smile. At the end of a row of vines that he was trimming, he turned off the motor and got out to come shake hands with me and say bonjour. I suspect he wanted to greet Callie as much as me, because he used to have a border collie, he's told me, and since that dog passed on he's always missed him. Callie, who's not always the boldest dog, does love this man. 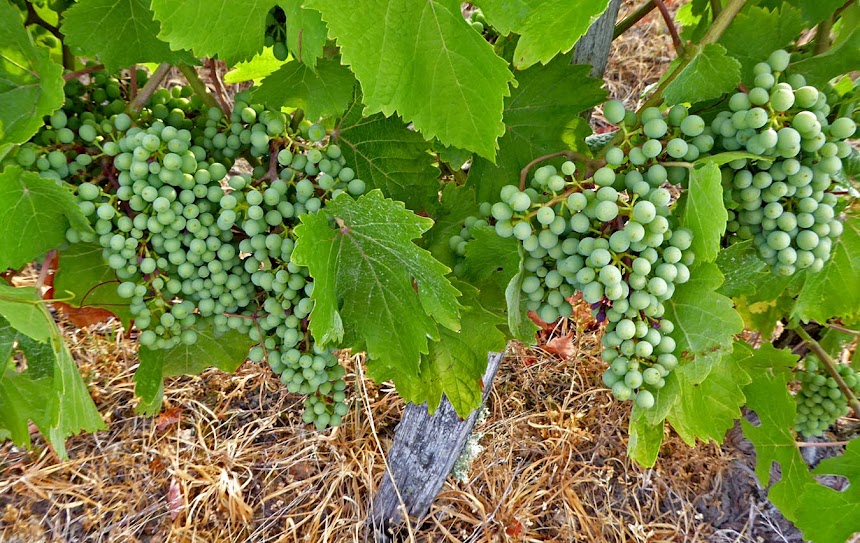 The conversation turned serious. The man told me the grapes this year are far smaller than they should be at the end of July. There won't be much wine, and the grape-growers won't have much to sell in 2016. At the same time, I should report I saw a recent report about the Bordeaux vineyards on the national news saying that even if the harvest is small, the quality of the wine produced will probably be exceptionally good. That's often the way it works. What it means is that wine prices will go up — again. 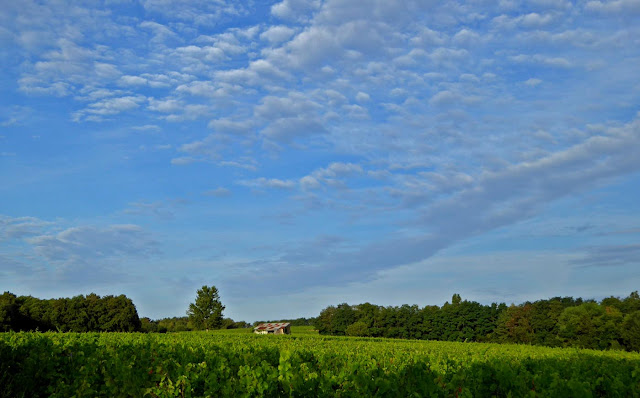 The man — I believe his name is Thierry — told me too that his cereal crops are suffering mightily. He said two large fields of corn he has, which he can't irrigate for some technical reason, have failed completely. He wnt on to say that he has recently handed off part of his land to one of his sons, who's pretty discouraged about being able to make a living as a farmer. Meanwhile, Thierry squatted down to pet Callie, smiled, talked easily about all this bad news, and enjoyed getting a lot of cheek and ear kisses. 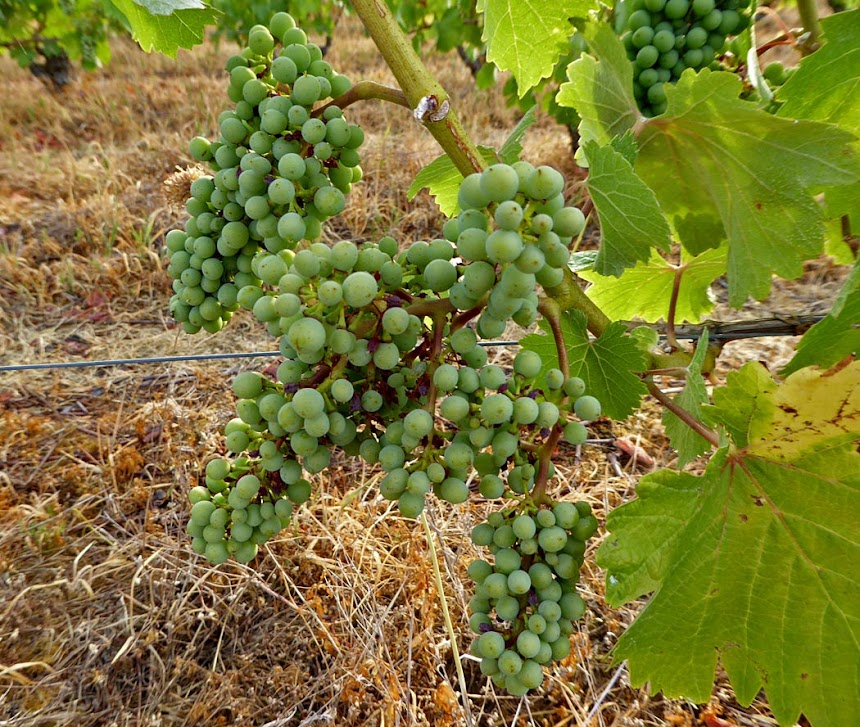 By the way, it's supposed to rain today. I hope it helps. In France, grape-growers are not allowed to irrigate their vines.
Posted by Ken Broadhurst at 07:45