I was in Paris on Saturday, May 30, staying with CHM at his apartment there. In the afternoon, I decided to go out for a walk in the neighborhood, just to take advantage of the beautiful weather and get some exercise before we embarked on our three-day drive out to the Perche and back down to the Loire Valley. I of course took my camera with me. 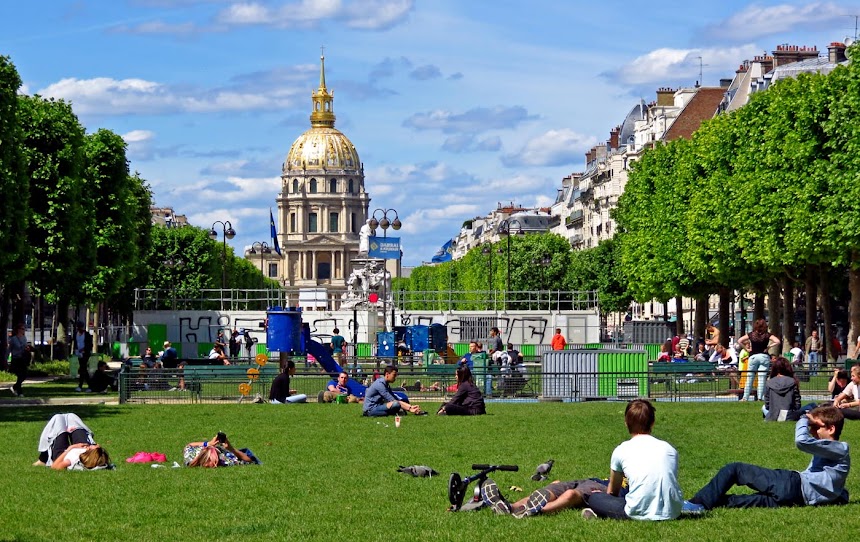 CHM's apartment is not far from the Avenue de Breteuil, which has a wide green median down its center. It's actually a big park. You can look up the avenue and get a view of the Eglise du Dôme at Les Invalides, where one attraction is Napoleon's tomb. On nice days, a lot of young people enjoy spending time out in the sun along the Avenue de Breteuil. 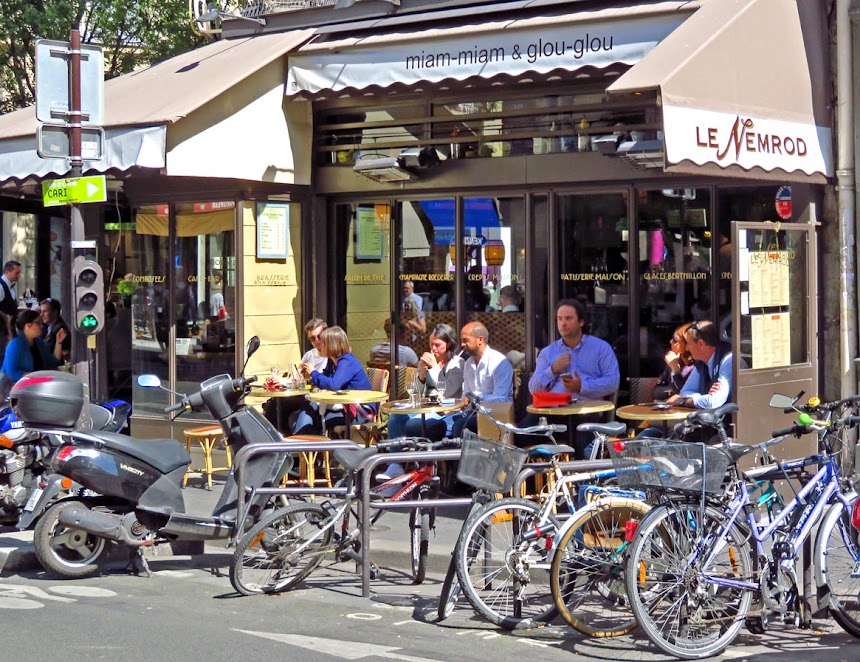 A lot of other people spend time in the sidewalk cafés around the city. This one is on the Rue du Cherche-Midi, I think. I walked over that way, dodging bicycles and other pedestrians. I took a lot of photos, of course. 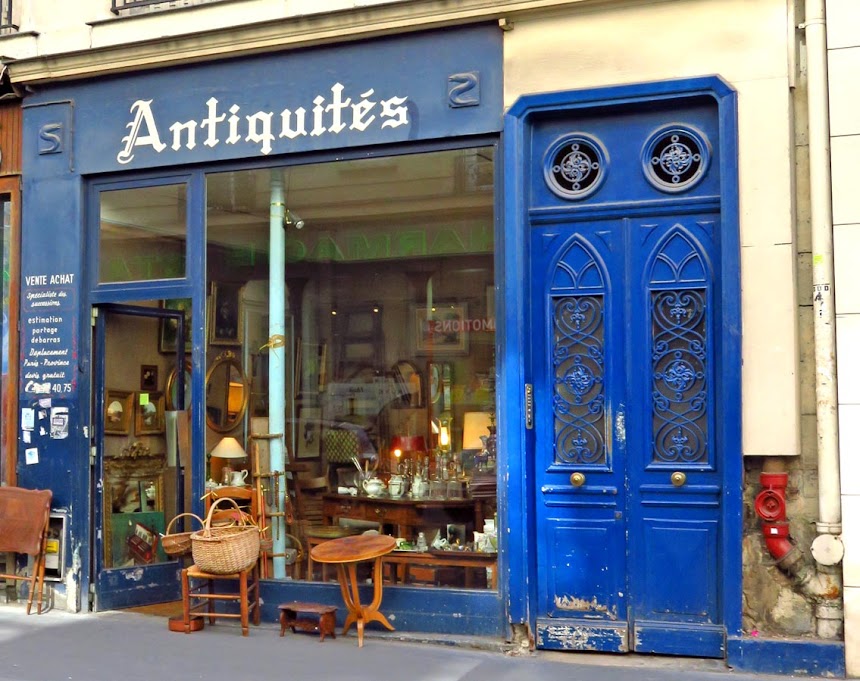 I considered stopping in to have a look around in this antique store, but I wasn't really in the market for anything. I would have had to go get the car out of the parking garage and drive over to the shop if I had found anything I just had to have. It would be fun to have an apartment in Paris to furnish with things found at such shops. 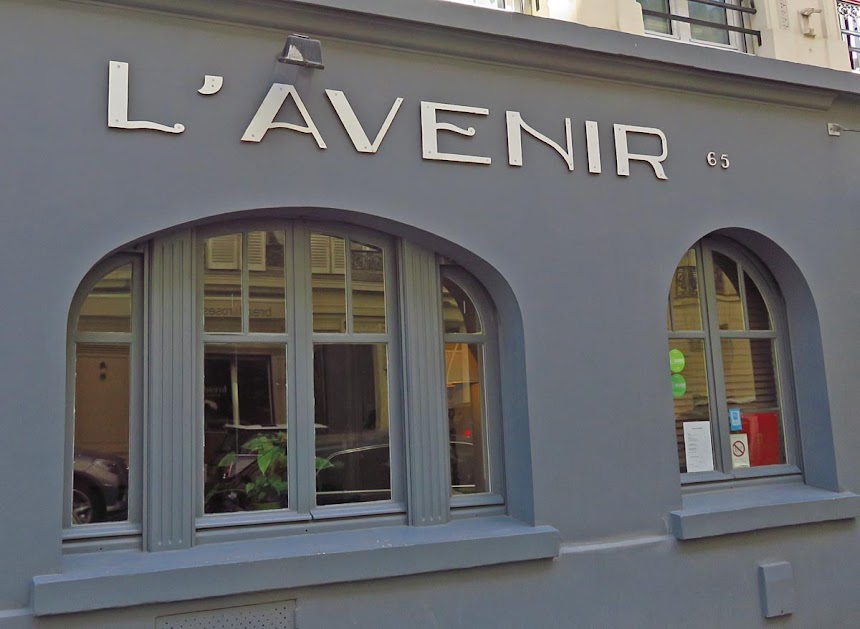 I decided to walk over to a neighborhood where Walt and I spent a lot of time back in the early 1980s and again between 1988 and 1993. It's near the Luxembourg Gardens. For years when we visited Paris we would get a room at the Hôtel de l'Avenir — "the hotel of the future" — which at the time was very welcoming and pretty comfortable. It's been a long time now... 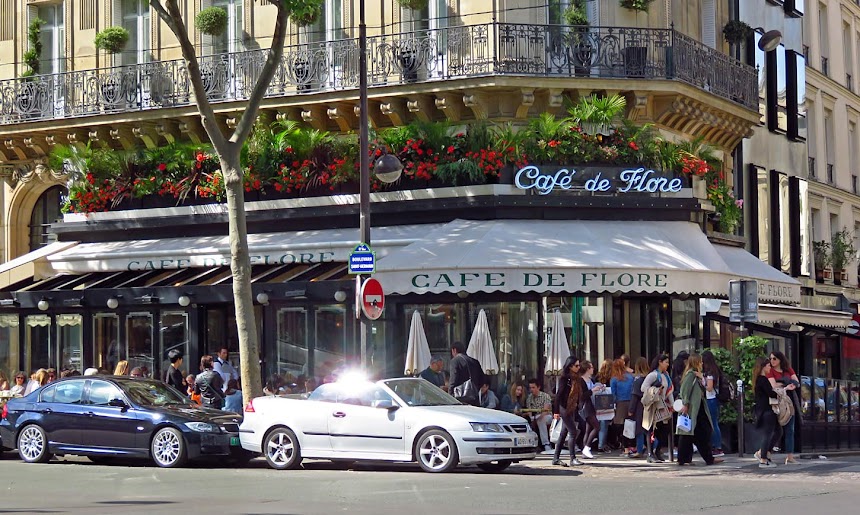 Since I was in the area, I continued exploring over toward the Saint-Germain-des-Prés neighborhood, also old stomping grounds. I worked near here as a teacher back in the 1970s. As a student, Walt lived in a boarding house (une pension de famille) in the neighborhood for a few months in 1981. It's nice to spend some time wandering around Paris every now and then.
Posted by Ken Broadhurst at 07:45