They seem to be trying to change the name of the goat cheeses made in the village of Chavignol and all around the Sancerre area. Everybody calls them crottins, but the word has bad or at least funny connotations. Crottins are what we call might call "droppings" or, in French, déjections. Manure, autrement dit, or dung. Now I see the cheeses referred to simply as Chavignols. 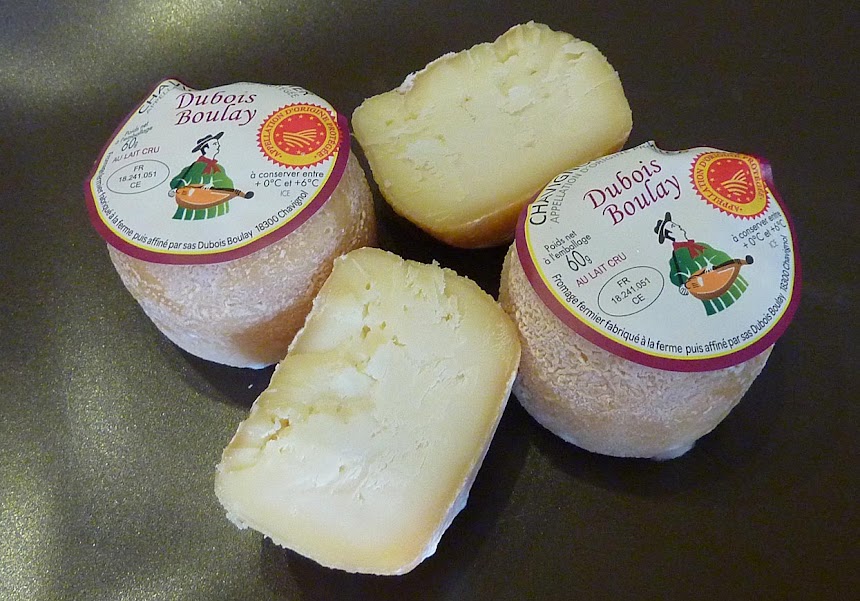 Apparently, the name crottin for the cheese comes from an old dialect word, crot, which meant a hole along the clay banks of a river or stream. Such holes filled with water and people did laundry in them. And that clay was used to make a container that curdled milk was poured into to form little goat cheeses, which then got the name crottin. You can read about it here, in French. It's a good theory. 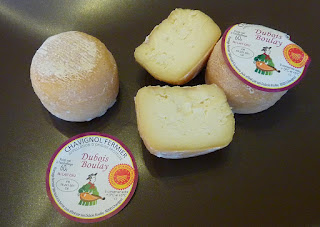 The web site I've linked to says that nobody really knows when the little goat cheeses of Chavignol got the namec crottin. It might have been as late as the 19th century, even though goats have been raised in the area since at least the 16th century. When phylloxera wiped out the Sancerre vineyards in the late 19th century, making goat cheeses became the area's main industry. Nowadays, the wine-making and cheese-making industries thrive side by side, as in much of the Loire Valley.


One of the requirements for making Chavignol cheese is that the goat's milk be cru — unpasteurized. That's what the cahier des charges, or specification, for the Chavignol cheese AOC (granted in 1976) or AOP (1996) says. Other goat cheeses, including those of Selles-sur-Cher and Valençay near Saint-Aignan, can be made with frozen or even powdered goat's milk, which means that they are available not just seasonally but year-round. Maybe the same is true of Chavignol cheeses, at least the frozen milk part — what I've read isn't clear on that point.

There are only four affineurs, or companies that specialize in aging cheeses, in the Sancerre area. They buy cheeses from local farmers and mature or age them under controlled temperature and humidity conditions. The cheeses CHM and I bought back in early June were affinés by a company called Dubois Boulay, in Chavignol itself. As you can see from my photo above, it's a modern facility. 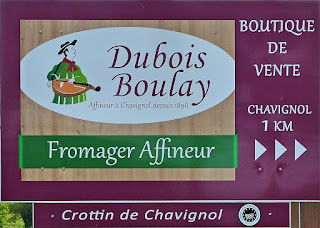 How we actually found the cheeses we bought is a whole story unto itself. We had driven toward Chavignol from the north, stopping on that high ridge to take panoramic photos of the village and of Sancerre. Then we drove down toward Chavignol on a narrow, winding paved road, which it turned out was closed by construction work. We had to turn around and drive back up the hill to where we had come from. 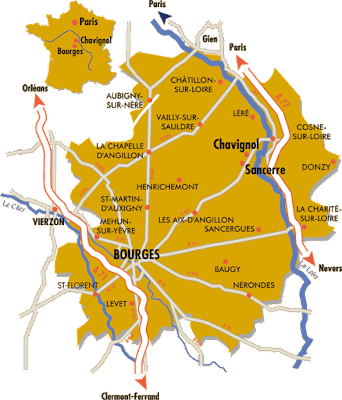 Then we drove all around the area to find a different route into Chavignol, but with no luck. We ended up stopping in a supermarket on the edge of Sancerre and buying goat cheeses there, along with a few bottles of the local wine. We drove up into the town of Sancerre to have a look around. Finally, as we were deciding to leave the area without actually seeing "downtown" Chavignol from close up, we found the way in. We drove past the Dubois Boulay cheese facility and through the village. There was no place to park, so we kept going.


The cheeses we bought at the supermarket were really delicious. In fact, they still are, a month later. I have two left. They are very dry and very hard. On the left is a map of the Chavignol cheese production zone that I found on the crottindechavignol.fr web site. Click or tap on it to see it at a larger size.