Meanwhile, closer to the Tour Saint-Jacques...

No, don't get the idea that I'm through with the pictures I took from the top of the Tour Saint-Jacques in late July. I really took advantage of the first opportunity in the history of the tower to climb to the top by snapping a lot of photos, and I was lucky with the weather and the camera. 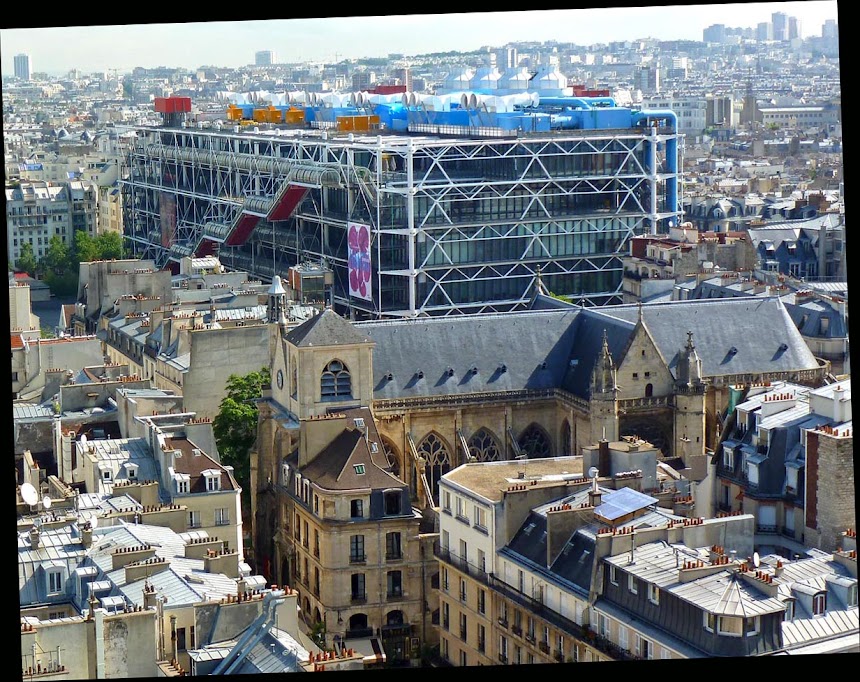 The Pompidou Center, a library, media center, and art museum, was built in the 1970s near the old church
called Saint-Merri, amid considerable controversy.
The views here are some shots of sights and monuments that are much closer to the tower, which stands squarely in the middle of the city. The Pompidou Center (a.k.a Beaubourg), to many a monstrosity, but already approaching its 40th birthday, is an example. 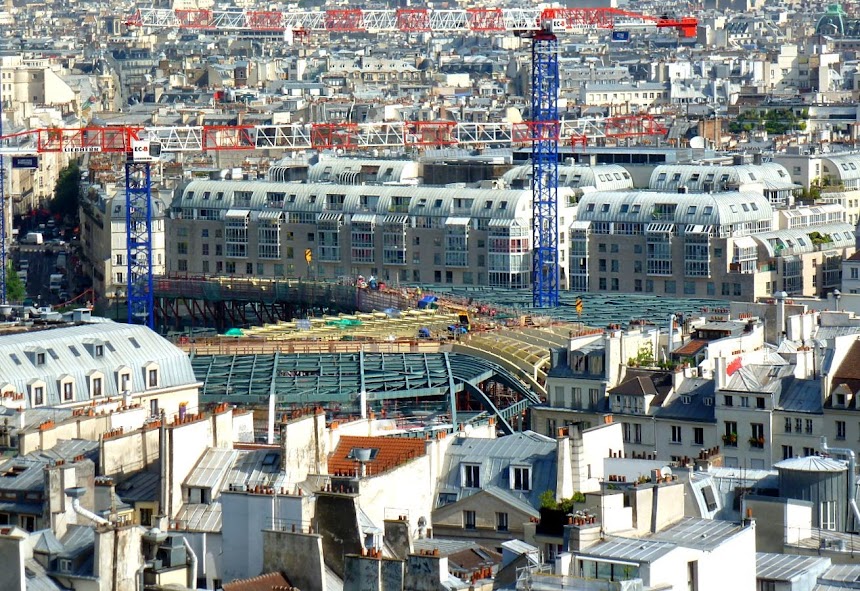 The new structure at Les Halles won't be a dome but will be what they are calling une canopée — as if Les Halles were a rain forest.
New architecture, new words, I guess...
Les Halles, the big transit hub and underground shopping center, nearby too, is another Paris feature that's approaching its 40th birthday. These were neighborhoods I lived in back in the late 1970s and early '80s — pendant les travaux. Plus ça change, plus c'est la même chose. 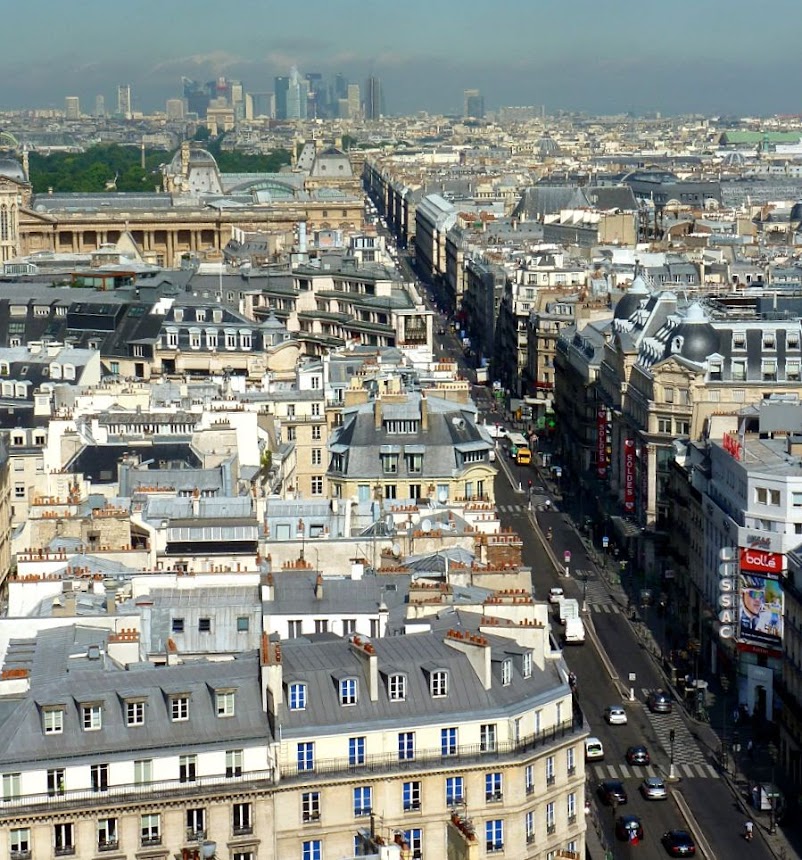 Here's a view that combines the nearby and the distant Paris.
That's La Défense out there beyond the Louvre and the Arc de Triomphe.
In the mid-1970s, I lived out in the western suburbs of Paris — Asnières, to be precise — while the new quartier d'affaires called La Défense, with its skyscrapers, was being built. I remember taking the train two or three stops to La Défense to do my grocery shopping back then because they had put in a huge underground supermarket there. Modern Paris — on n'arrête pas le progrès, as we say. 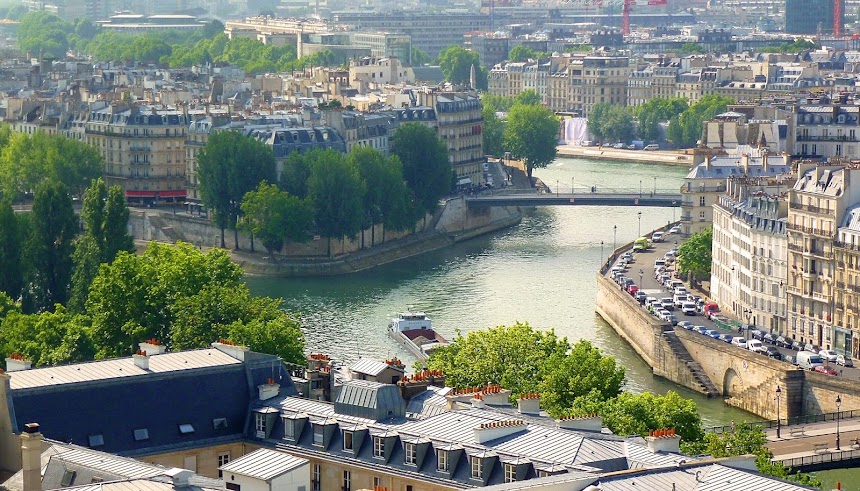 L'Ile Saint-Louis, which was a big real estate development 300 or 400 years ago — fairly late in the history of Paris — is now one
of the parts of Paris that most adamantly resists change (but has become pretty touristy).
The Seine was always the city's raison d'être. Now it is the feature that gives Paris a good part of its cachet. It's been cleaned up to the point that you see people fishing it it, if not swimming, and you see many more people soaking up the sun along its banks when the weather cooperates. 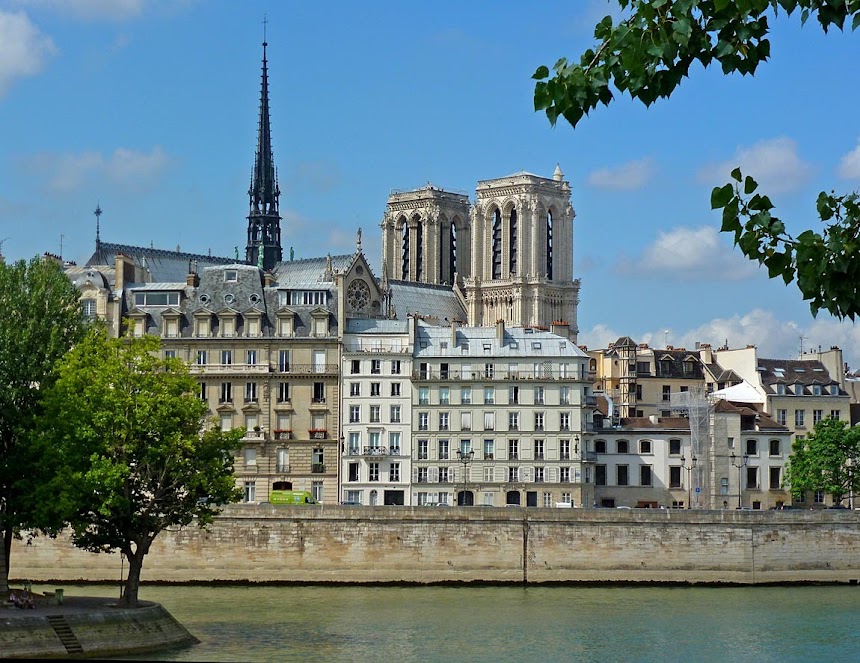 The steeple and towers of  Notre-Dame-de-Paris and the surrounding buildings
The last photo is one I took at ground level as I began my walk along the Paris-Plages summertime beach area the other day. Speaking of photos, I haven't taken very many at all since I got back from Paris more than a week ago. I'm overwhelmed with the Paris pictures for now.
Posted by Ken Broadhurst at 07:45