Figuring out lunch in Paris

Our weather is really hot again now. Welcome to August. Yesterday the temperature was up to about 85ºF (30ºC). Today it's predicted to hit the low to mid-90s F, or close to 35ºC. The sun really beats down. We don't have air conditioning. This morning I got up at about 5:15 a.m. and opened the house up completely to let as much in cool air as possible before we close up again to keep out the hot rays of the sun and the hot air.


A week ago I was in Paris. It was hot there too. It was especially hot on the streets, out in the sun. But that's where I was: walking. I figure I walked 10 kilometers around the city last Friday, and I took another fairly long walk on Saturday — maybe half as far, because my feet were starting to hurt at that point. And I was getting tired of sweating. The morning news just reported that July 2013 was the third-hottest month in France in 100 years. 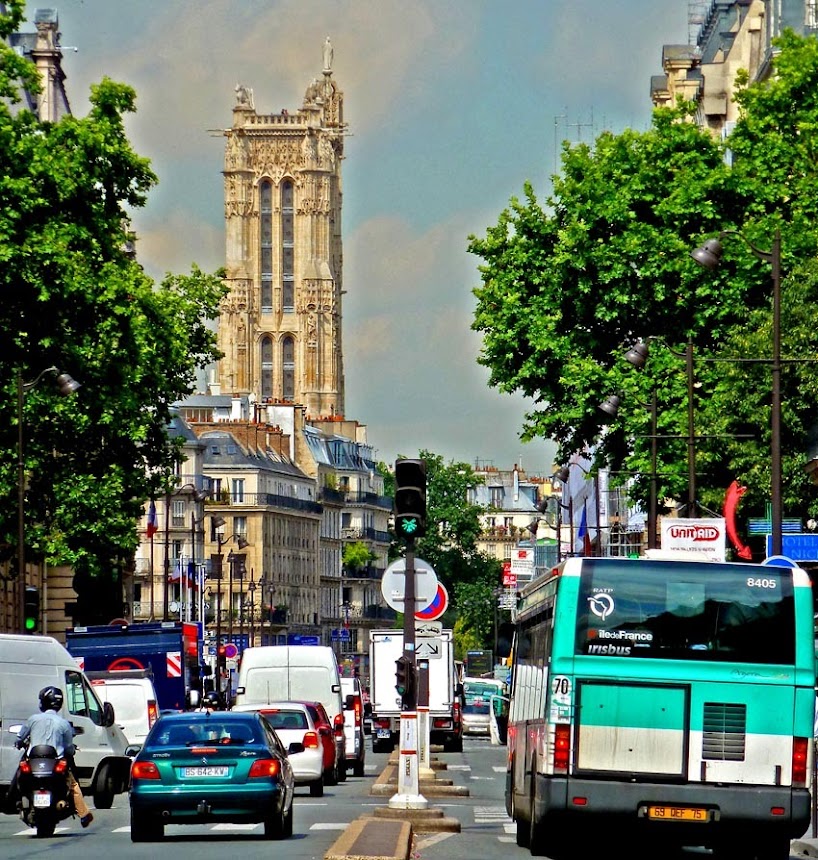 
On Friday, I started walking where the no. 70 bus let me off, on the left bank end of the Pont Neuf. I walked through the Place Dauphine on the Ile de la Cité and over to the Place du Châtelet. I waited for about an hour to join the first group of 17 "tourists" and two guides to climb to the top of the Tour Saint-Jacques at 10 a.m. The 300-step climb was a killer — I'm 64 years old — especially because it had rained hard in the morning and when the sun came out Paris felt like a steam bath. Interestingly, all the people in the group were French except me and one young Asian woman. I don't think most tourists are out and about by 9:00 a.m. 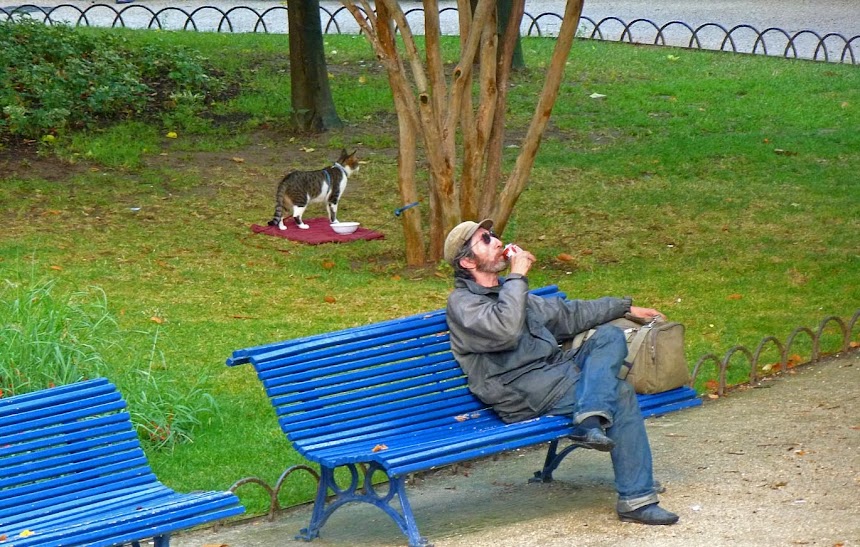 This man — homeless, I presume — was enjoying a soft drink and had his cat tied to a tree
in the park at the base of the Tour Saint-Jacques.


After climbing up the tower, taking a lot of pictures, and then descending from the heights (16 stories up), I walked eastward to the Bazar de l'Hôtel de Ville department store on the Rue de Rivoli. I went in and got a blast of air-conditioned air to dry myself out slightly, and then I walked over to the Place du Bourg-Tibourg to sit down at a café and have something cold to drink. I ordered a tall glass of water... and a beer. I hardly ever drink beer, but on hot days it can be really refreshing. 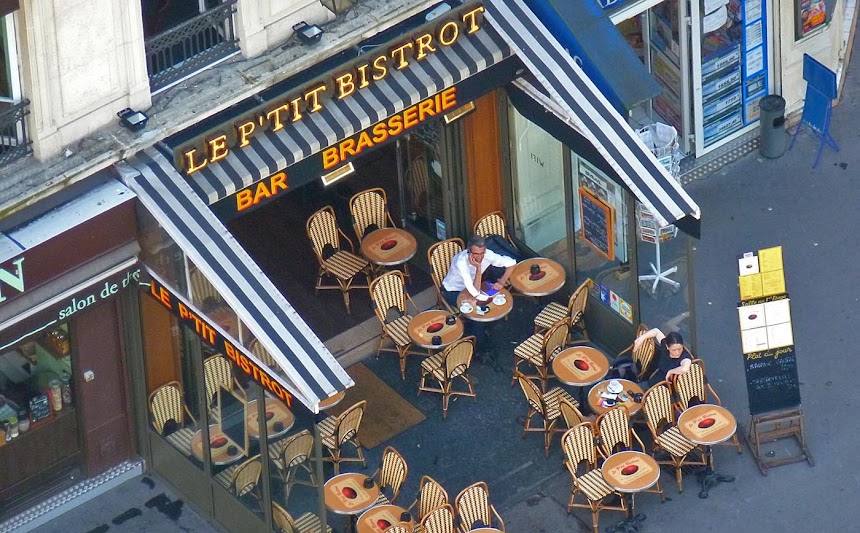 
I continued my trek into the Marais and through the old Rue des Rosiers neighborhood. There weren't an awful lot of people on the streets — it was too hot and muggy, I guess, and in late July many Parisians have left the heat of the city to vacation in other parts of France, or in Spain or Italy, for example. I was just wandering, and wondering where I might have lunch and what I might eat. 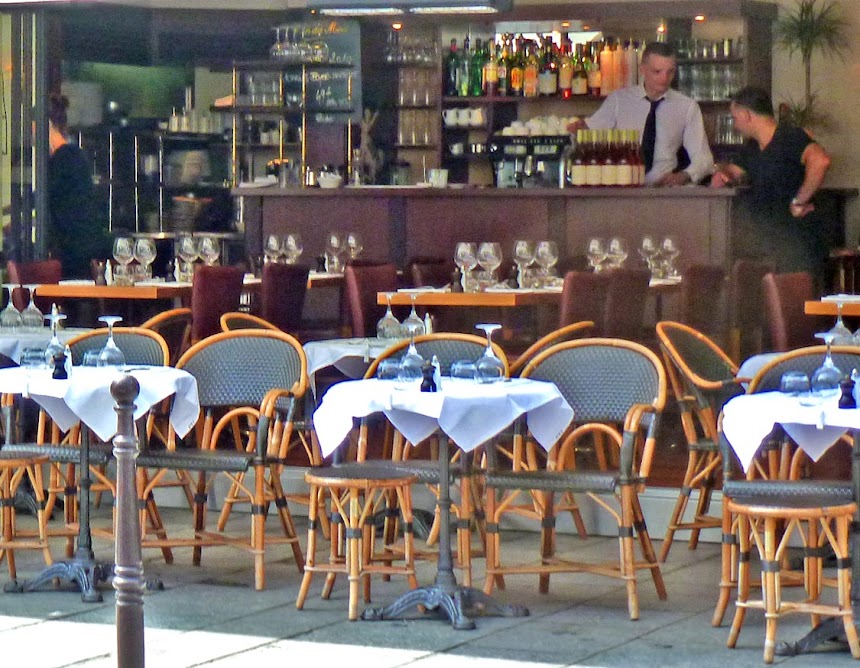 Staff at a sidewalk café setting up for the lunch rush


I thought about going to one of Walt's and my favorite pizzerias, Le Sant'Antonio, but then CHM (who I was staying with) and I had talked about having Italian food that day or the next. And Walt was planning to make pizza as my welcome-home lunch on Sunday back in Saint-Aignan. I skipped the Sant'Antonio — reluctantly. 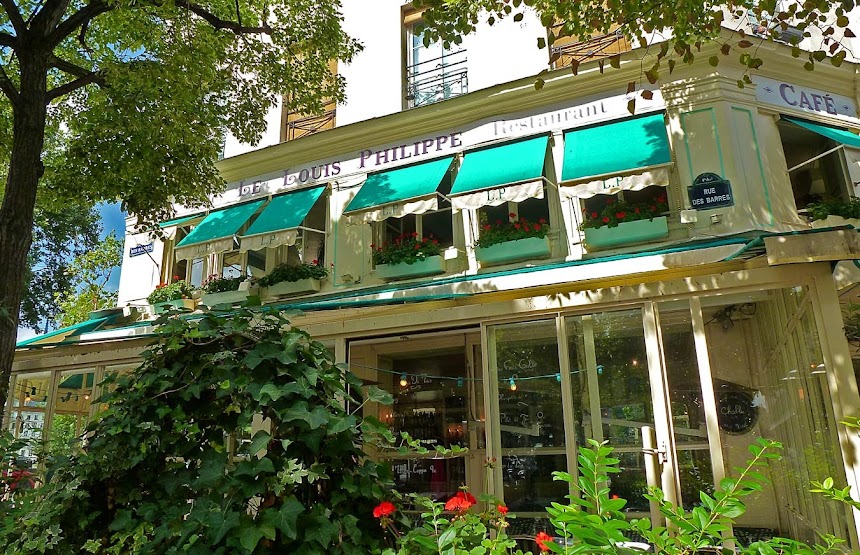 Walking on toward the Seine and the Ile Saint-Louis, I decided I'd eat an omelet for lunch. I figured CHM and I would have either Italian or Japanese for dinner later in the day, and an omelet wouldn't be too filling. There's nothing like a nice not-overcooked omelet — une omelette baveuse, or "drooly" — in a Paris café or restaurant. You never get that kind of omelet in the U.S., and I'm afraid I'm not very good at making runny omelets at home. I should try more often to perfect the technique. As I was getting close to the bridge — Le Pont Louis-Philippe — that would lead over to the Ile Saint-Louis and then to Notre-Dame cathedral, I passed by a restaurant where I've had several good meals over the past five years. It's called the Café-Restaurant Louis-Philippe (link, link, link, link) and it has a big outdoor terrace in shade.

That makes for a very pleasant place for lunch when the weather is fine. And by coincidence, on the chalkboard announcing the day's special for lunch, here's what I saw: Omelette paysanne, salade verte. It was meant to be. (Paysanne means "peasant-" or "country-style.")

I sat alone surrounded by two men having lunch on one side of me and a man and a woman on the other side — all French. I eavesdropped shamelessly on their conversations as I enjoyed my omelet, salad, white wine, and coffee.
Posted by Ken Broadhurst at 07:30