...including a café, Le Flore. The other famous café in the Saint-Germain neighborhoods is Les Deux-Magots, of which I posted a photo earlier. 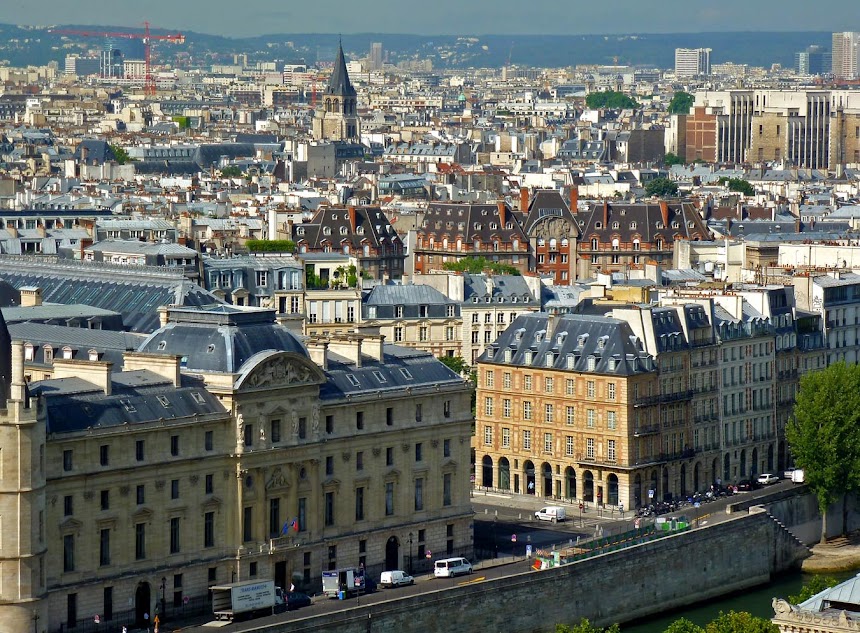 From the top of the Tour Saint-Jacques, looking out over the place Dauphine and the western end of the Ile de la Cité
toward Saint-Germain-des-Prés and the 15th arrondissement beyond


In the photos above and below, you can see the tower of the Eglise de Saint-Germain-des-Prés, which was built in the fields or meadows (les prés) outside the city of Paris around the year 1000. It replaced a Benedictine abbey that had already been in existence for 400 years but had been sacked repeatedly by invading Norsemen in the 10th century. 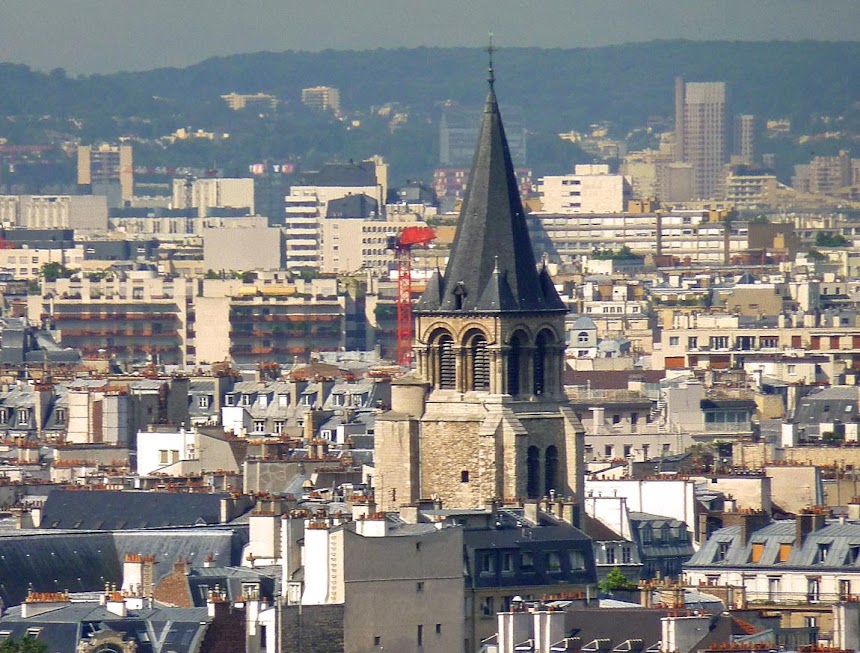 Here and below, one of the oldest church towers in France, according to the Michelin Green Guide


The abbey (a monastery) grew into a huge walled complex of buildings by the 14th century. The wall with its defensive towers was torn down in the 17th century when the area was developed as a new residential zone. As you can see, today it is in what we know as central Paris. The church, which as been greatly altered over the centuries, was dedicated at the time when construction of Notre-Dame cathedral was just getting under way. The remaining Saint-Germain bell tower — two others have long since been demolished — is one of the oldest in France. 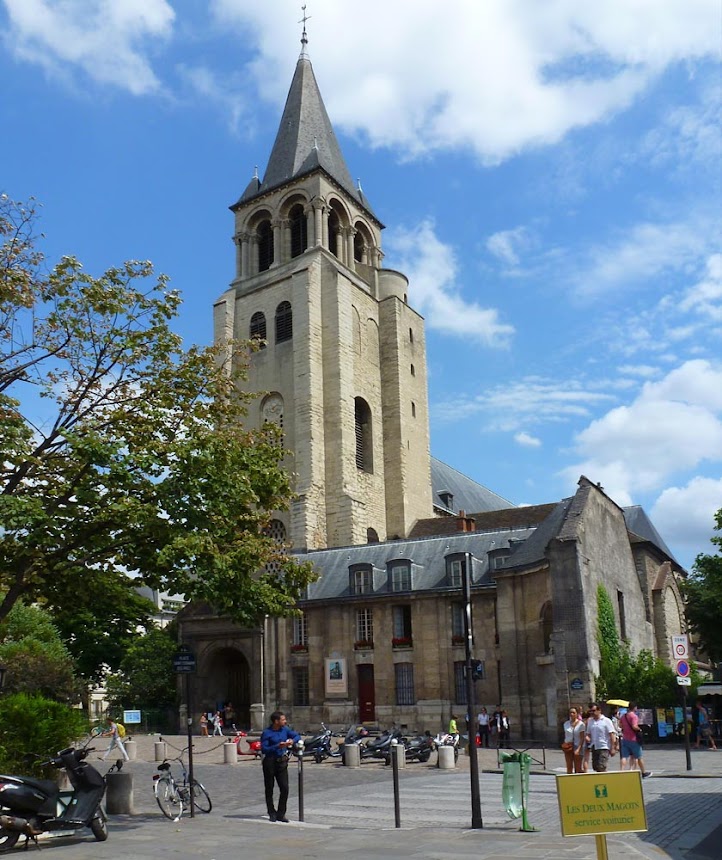 In the 20th century, Saint-Germain became known for its two famous cafés, hangouts for Paris Left-Bank intellectuals, writers, and artists (Jean-Paul Sartre, Albert Camus, Pablo Picasso, Juliette Gréco, and so on). Across the boulevard from the cafés is the Brasserie Lipp, then and maybe still frequented by writers and political figures in search of a choucroute garnie. The neighborhood has really changed over the past 40 years, however. No longer bohemian and intellectual, it's now fashionable and touristy. 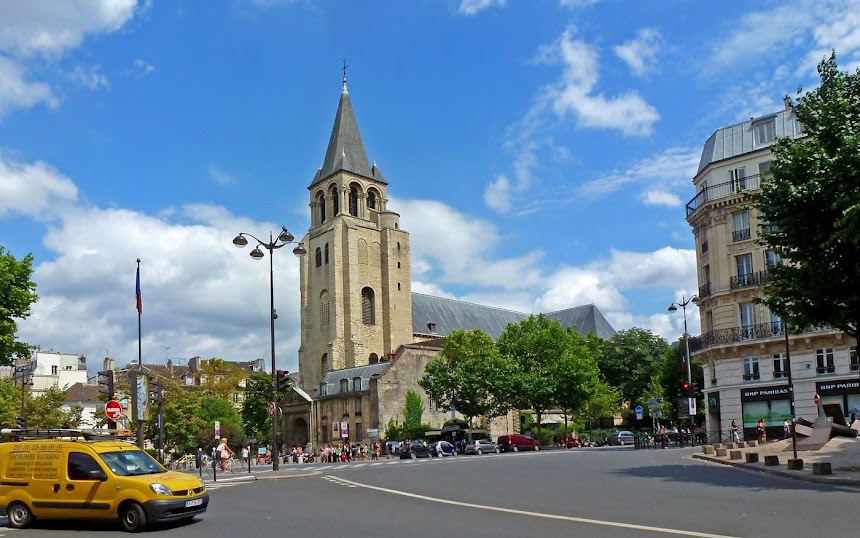 In the 1960s and '70s, the hub of activity in the Saint-Germain neighborhood was an establishment called Le Drugstore, which was right across the boulevard from the Café des Deux-Magots, at the corner of the rue de Rennes. It was a good place to go for coffee, a hamburger, or a club sandwich, not to mention an ice cream sundae. Au Drugstore Saint-Germain, you could buy a newspaper and a pack of Gitanes or Gauloises, and then lounge on the terrace for part of the afternoon. Unfortunately, it was the target of a terrorist bombing in the mid-1970s (I worked in the neighborhood at the time). Two people were killed and more than 30 injured. But the Drugstore re-opened and stayed in business until the mid-'90s. It's gone now, replaced by an Armani boutique. 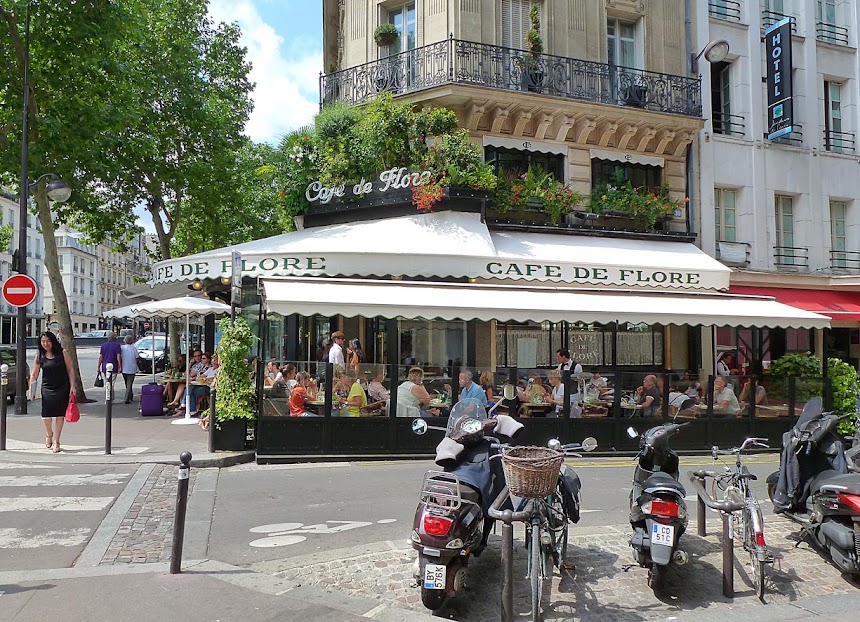 I know Walt has many memories of the Drugstore and the Saint-Germain neighborhood — Saint-Sulpice and the Alliance Française — from the early 1980s, when he lived there for a few months in a pension de famille. The proprietor of the boarding house was Madame Cornille — which can be translated as  "Mrs. Black-Eyed Pea" — and one of her employees was a decrepit old codger that Walt dubbed « Croque-Monsieur ». Judy "Seine Judeet" remembers these characters as well, I'm sure, as do I. Encore une fois, de bons souvenirs...
Posted by Ken Broadhurst at 07:30