This is another café in the 7th arrondissement of Paris. It's near Invalides, on the avenue de la Tour-Maubourg at the corner of the rue de l'Université. It's a nice urban neighborhood but not what you would call quaint. It's near the river and not too far from the Eiffel Tower.

Walt and I almost always go have a meal or a glass of wine at Le Centenaire when we are in Paris. We have a really good memory of the place that dates back to 1995. Back then, we had been on vacation in France for nearly three weeks, staying in a rental property (un gîte rural) that we  found lacking in charm, atmosphere, and convenience. It was near Cahors down in the southwest. We left the gîte several days earlier than planned and drove to Avignon, where we stayed in a hotel for a couple of nights. We were headed to Paris to spend a few days there before flying back to San Francisco.


At the time, when in Paris we often got a room in a hotel just outside the western gate of the Luxembourg Gardens, off the rue de Fleurus and near Saint-Sulpice. As we drove up the autoroute from Avignon to Paris that day in October — it takes a few hours — we talked about where we would stay in Paris those few remaining days of our trip.

What about an apartment rather than a hotel room? I stopped the car at a rest area and made a call from a phone booth to a rental agency in California that specialized in short-term Paris rentals. We had rented an apartment from them the year before, on the Ile Saint-Louis, and really loved it. This time, they had a last-minute deal on a small apartment in the 7th. We booked it on the spot. I think it was $75 a night. 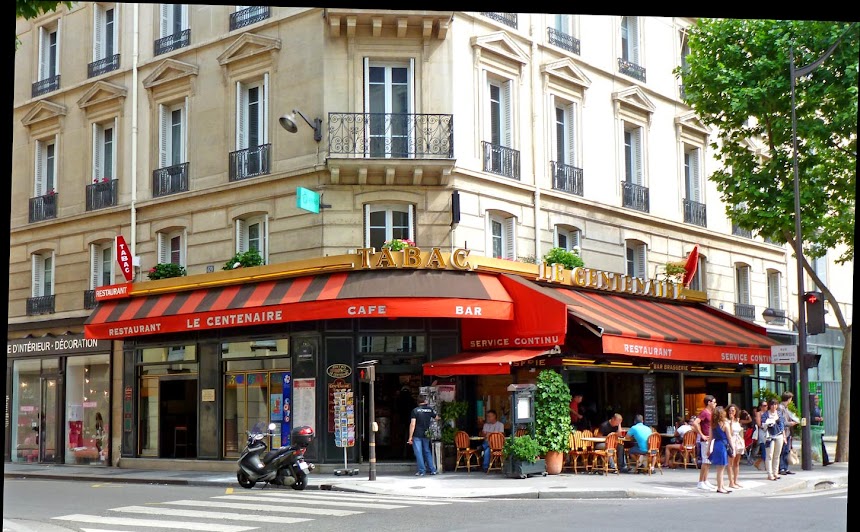 We drove our rented car into Paris at mid-day — it was the weekend, so there was almost no traffic. It was beginning to rain — it might have been the first rain we'd seen in our three weeks in France. We were early; check-in at the apartment wouldn't be for a few hours. We found a place to park the car and spotted Le Centenaire on a street corner.


We had lunch. It was the best roasted chicken we thought we had ever tasted. The wine was good too, and the frites and the salade verte. We were happy to be back in Paris rather after nearly three weeks of doing entirely too much driving on twisty narrow roads. Even the rain seemed like a nice turn of events, and appropriate for Paris. De bons souvenirs...
Posted by Ken Broadhurst at 07:40