Riding the train in France

Last month we were up in the Perche region for a short vacation. Walt drove back a couple of days early to make sure the cat and the vegetable garden were doing okay. We took the dog with us, and he brought her home. I stayed on for two more days.

Since the friends I was spending time with were all heading north toward Normandy or Paris at the end of our trip, I took the train back to Saint-Aignan. On the SNCF (French National Railways) web site, I had found a train from the town of Alençon, a short drive from where our gîte rural was located in the Perche, that would take me all the way to Saint-Aignan. The fare in second class, with my discount for being over 60 years old, was about 22 euros. 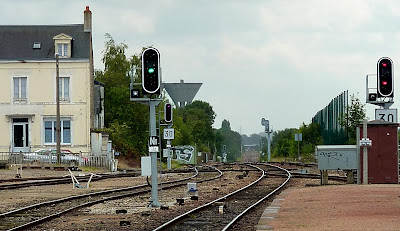 Looking down the tracks at the gare d'Alençon
The train left Alençon just after lunch. I rode through Le Mans (famous for its car race) but didn't have to change trains there. There were a couple of other stops before the train arrived in Tours, on the Loire River. It traveled around the west and south sides of the city before arriving at the big train station on the east side of Tours, in a suburb called St-Pierre-des-Corps. That's the Tours station where the TGV (High-Speed Train) from Paris or Roissy stops. 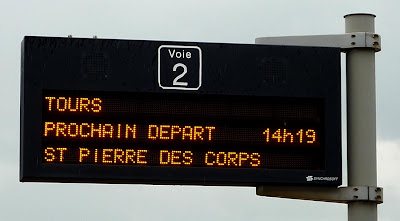 For Tours/St-Pierre-des-Corps, departure at 2:19 p.m.
I had a forty-minute layover at Saint-Pierre. That was just time enough to go have something to drink in a café in the station and read for a few minutes. People-watching was good — after living in the country for 8 years, it's always interesting to see what city people look like. Then I got on the little train called the TER (Train Express Régional) that goes from Saint-Pierre to Saint-Aignan. 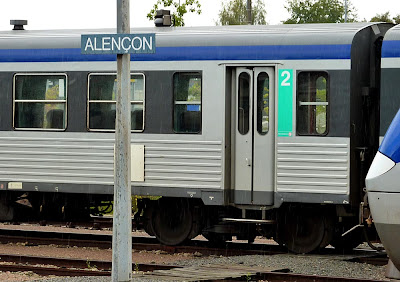 Trains at the Alençon station
The whole ride was pleasant and easy. The trains are comfortable, and on a Saturday afternoon neither train was crowded. The ride was smooth, and there was plenty of light coming in through big clean windows to read by. Quite a few people got off the train in Le Mans — I'm not sure where the train originated — and a few got on for the ride to Tours.

A typical French "regional express train" or TER
The little train from St-Pierre/Tours to Saint-Aignan runs east along the Cher River, along the north bank. The scenery is pretty. There are several stops, in places including Chenonceaux, Bléré, Montrichard, and sometimes Thésée-la-Romaine. After Montrichard, you start seeing the troglodytic houses and outbuildings carved into limestone cliff faces that are so characteristic of the whole Loire Valley area.

The train station for Saint-Aignan and Noyers-sur-Cher is located across the river over in Noyers. It's just about four miles from our house, so Walt had a very short drive to come and pick me up. My trip took about three hours, including the forty minutes I spent in a café at Saint-Pierre. According to Google Maps, the trip by car would take three hours too. And according to the maps on the Michelin web site, tolls and fuel costs would come to about 36 euros.
Posted by Ken Broadhurst at 07:52