Tomatoes. Now's the season, and the crop didn't fail this year, despite the wet weather we've had for the past two months. We got more rainfall in August 2011 than in any other August since we started keeping track of these things in 2004. Part of the 2011 tomato crop at La Renaudière
I've figured out three ways, basically, to preserve tomatoes so that we can enjoy them year-round. Making sauce out of them is the most obvious solution, because you can either freeze it or put it up in sealed jars that will keep in the cellier (the downstairs pantry). I call it sauce and not puree because I cook onions, bay leaves, thyme, sweet paprika, and sometimes garlic with the cut-up tomatoes. 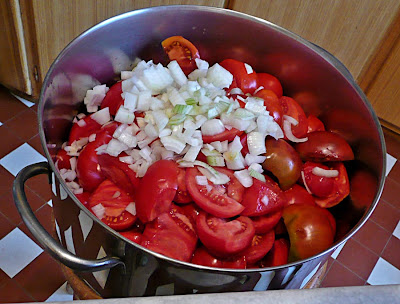 I cooked at least 15 quarts of tomatoes into sauce
over the past two days.
After cooking, the tomatoes need to be run through a food mill to eliminate most of their seeds and pretty much all of their skins. After milling, you can slowly cook the sauce down some more on low heat to concentrate and reduce it. Reducing it means you can put it up in fewer containers or jars, saving space. You can always add water to the sauce when you cook with it later. 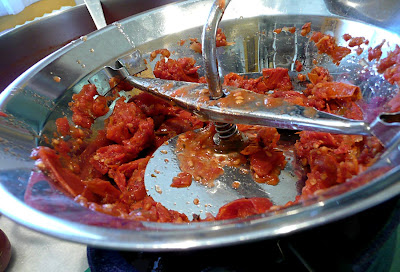 Run the cooked tomatoes through a food mill, along with
the onions, garlic, and herbs that cooked with them.
When I put tomato sauce in sterilized jars for long-term storage, I add a tablespoon or two of vinegar to each jar, depending on size, to increase the acidity of the sauce. For freezing, that addition isn't necessary. For "canned" tomatoes, I'm experimenting this year with heat-processing the jars in the oven rather than a water bath or pressure cooker. It's a lot easier. 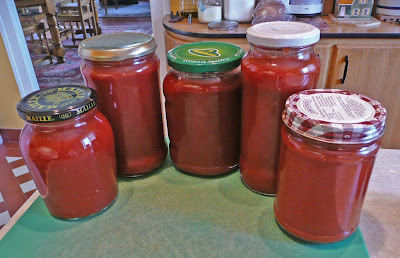 Five big jars of tomato sauce for the winter
First I sterilize the jars and lids in a 110ºC (220ºF) oven for ten minutes. Then I fill them with sauce that is still at the simmer, screw on the lids, and process them. AAs Tom S. says in the comments below, it's best to use the recommended water bath or pressure cooker method to make sure the jars are sterilized.

The other way to preserve tomatoes and concentrate their flavor is to dry them in the oven. It takes six to eight hours to dry them without scorching them. Cut them in half or quarters, depending on their size. There's no need to peel or seed them, and no need to add oil, herbs, or other aromatic ingredients. Arrange them skin-side down on foil, parchment, or a silicone pad on a baking sheet. I can do three trays at a time in my oven. 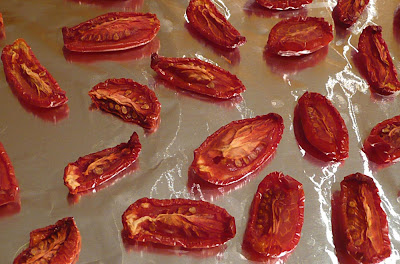 Tomatoes drying on a foil-lined pan
I've had good luck starting the tomatoes in the oven at 95ºC (200ºF) in the afternoon, letting them dry for four or five hours, and then turning off the oven and letting them sit in there with the oven door closed overnight. The next morning, another couple of hours of drying at about 100ºC (210ºF) finishes the process. 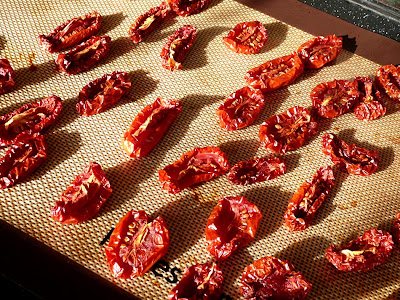 Oven-dried tomatoes on a silicone pad
The tomatoes are ready when they no longer feel sticky or soft. Remove them gradually as they dry, leaving the stickier ones to continue drying out. I'm not sure this is necessary, but I put the dried tomatoes into sterilized jars, screw on the lids, and then put the jars back in the oven at about 110ºC / 220ºF for 15 minutes. The jars will seal as they cool and can be kept in a cool dark place over the winter. 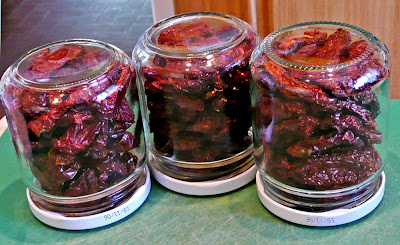 Three little jars of oven-dried tomatoes
The third way to preserve a big tomato crop is to freeze the tomatoes, either whole of cut into wedges. The quickest way is to freeze them whole. Cutting them up takes some time. Then the best way to freeze tomato wedges or halves is to arrange them on a flat pan so that they can freeze separately instead of in one big block. When they're frozen, put the pieces into plastic bags in the freezer.

Frozen raw tomatoes, once thawed, are mushy — don't expect fresh tomato wedges. You can add frozen raw tomatoes to soups, or you can make sauce out of them. The only advantage I see in freezing tomatoes raw is that it's a quick and easy way to process them when you are overwhelmed with a large crop. Freeze now, cook later.
Posted by Ken Broadhurst at 08:20