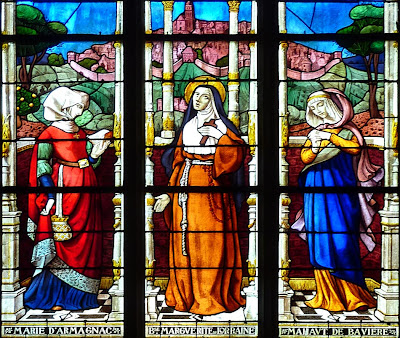 Three saints who played important roles in the history of
Mortagne are depicted in this 20th-century window.
The secret is to zoom in on the glass panels without leaving too much of the dark border around them. The high contrast of the bright glass with the stone border — it's usually pretty dark inside churches — will give you washed out colors. Or you'll get a blurry shot because there just isn't enough light getting into the camera lens. 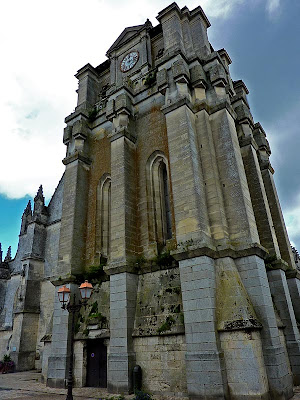 This picture is one I took at noon,
up close to the church.
The church in Mortagne looks severe and forbidding to me. It's not graceful at all, at least from the outside. It was built in the 16th century in the flamboyant Gothic style. 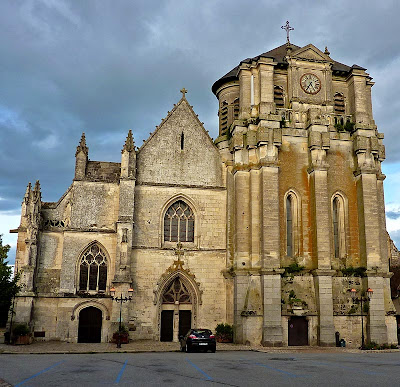 This shot is one I took from farther back at dusk,
when the light was warmer.
According to what I've read, the church in Mortagne has four 16th-century windows. All the other windows are from the 20th century. In the older windows, Biblical figures are often depicted wearing 16th-century clothes. 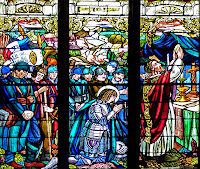 In at least one modern window, soldiers in World War I uniforms are depicted praying with Joan of Arc, who died 500 years earlier. So be it. I just like the colors. As usual, you can click on any of the pictures to see them in a larger size.
Posted by Ken Broadhurst at 09:34