The weather is making news in France again. This year is an odd one. After three unusual months of sun and drought in the spring —April, May, and June — we had a rainy July and a very rainy August. People started complaining that their summer had been washed out.

Now here we are at the end of September — already — and we are having weather that you might call Indian Summer. Except it's too early for that. In France, this is called the arrière-saison. It's fall, but you wouldn't think so if you went outdoors. It (still) feels like summer. Better than summer, actually. 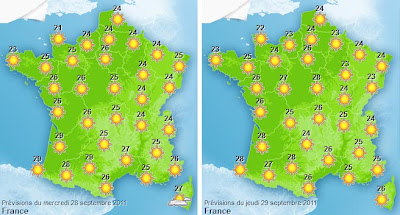 The weather on Wednesday and Thursday
will be excellent, they predict.
People who work for a living, and students of all ages, are probably feeling slightly short-changed. They're back on the job now, or back in school. They can't take full advantage of the fine sunshine and warm temperatures. We retirees are luckier. Walt finished trimming the hedge yesterday. We've been cleaning up the vegetable garden. A good friend from California arrives tomorrow for a stay of three or four weeks. She has lucked out with the current weather. 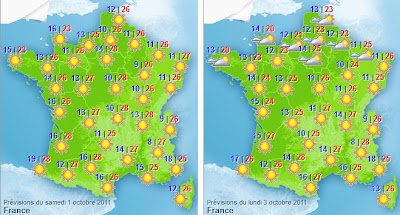 Saturday and Monday look good too. (I skipped Friday and
Sunday because I didn't want you to have to
put on sunglasses to read this.)
How much like summer does it feel? Well, the days are definitely shorter now than they were in July. But temperatures are warmer an in July or August. Afternoon highs are predicted to hit 80ºF or higher — 27ºC or higher — in Saint-Aignan and much of northern France for the next week. With no rain.

A few days ago I was predicting an early autumn. I have to take that back.
Posted by Ken Broadhurst at 07:40