The town now called Sées [say] — it used to be spelled Séez — is located just a few kilometers north of Alençon in Normandy. Sées is one of those surprising small French towns that is the site of a huge cathedral. It feels like an oversized monument out in the middle of the country.

Not every big church is a cathedral. Some are basilicas, and some are just churches. "Cathedral" is the name given to a church where a bishop "sits" — over which he presides. The word is related to the words "chair" or, in French, chaise. The first cathedral in Sées was built in the mid-400s of our era — more than 1500 years ago — when Christianity was just starting to be extablished in France. 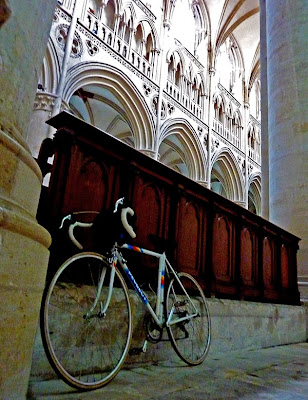 I liked this bicycle parked inside the cathedral at Sées.
That first cathedral was a small church, and it was destroyed during the Viking invasions of the late 800s. The Vikings, or Norsemen, gave their name to this part of what is now France — Normandy. During the late 900s, another cathedral was built in Sées, but it too was destroyed by the year 1050 — it was set on fire by a local lord and bishop named Yves de Bellême because the church had become a haven for brigands and prostitutes. 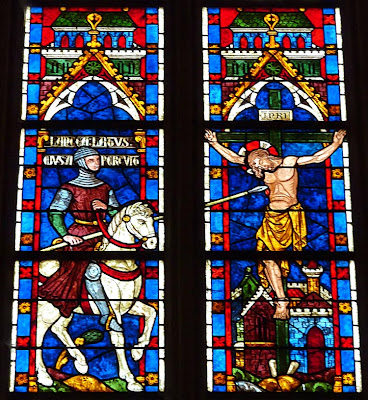 Stained glass in Sées cathedral
Catholic authorities were angry that Yves de Bellême had burned his own church, and as penance they ordered him to restore it. He did so, and the work was finished some 50 years after his death, in about 1125. That church was also burned out during wars in the late 1100s. 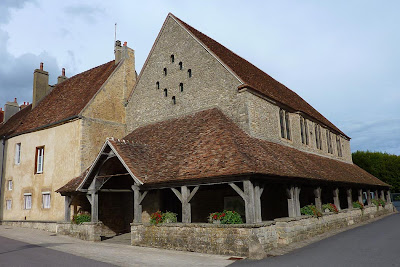 This building is the old cloister at Sées.
So the current cathedral is one that was built starting in the early 1200s. Construction went on for about a century, and the new cathedral was finally consecrated in 1310. The building suffered damage during the 100 Years War later in the 1300s, and again during the wars of religion between Catholics and Protestants in the 1500s. 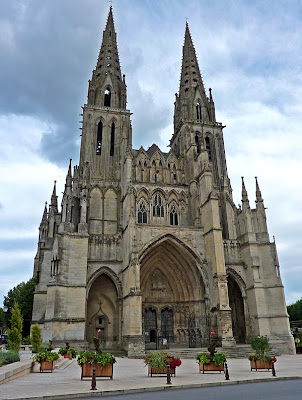 La cathédral Notre-Dame de Sées
By the 1700s, the cathedral was in such bad condition that the bishop decided to close it to the public. Part of the building had to be torn down and rebuilt. Its foundations had never been solid, and the parts that were still standing were leaning and had to be shored up. Work continued into the 1800s, when it was discovered that a Gallo-Roman building had occupied the site before the first cathedral was built in the mid-400s. All the rubble underneath the cathedral had made the soil unstable. 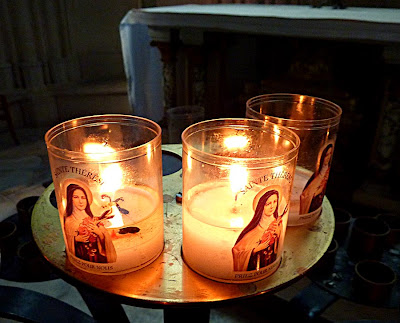 Candles in the cathedral
Most of the exterior of the cathedral dates back only to the 1800s, but the structure of the building is much older. I posted about Sées back in 2006, here.
Posted by Ken Broadhurst at 09:17