Bellême, population 1600, is a village that feels like a town. At least it feels that way on market day, and that's when we were there. There were a lot of people in the market around the church, but the streets of the old "closed city" above were basically deserted, as you can see in my photos. 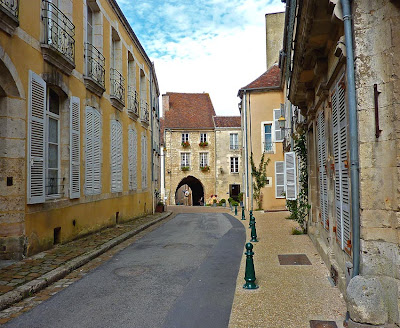 Why is it that so many French towns and villages look and feel like ghost towns when you drive through them or walk around their streets? It's a mystery. I guess everybody has a car these days, so you don't see many people out on foot. If it's lunchtime, everybody in inside, or in a courtyard, having the mid-day meal. In the afternoon, they're taking a sieste. And on Sundays and Mondays, most of the shops and restaurants are closed. 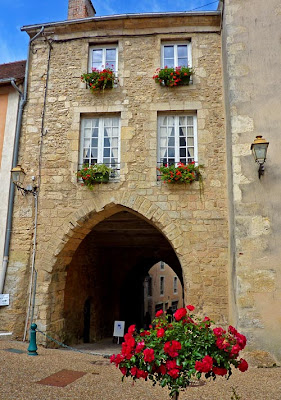 One of the gates of the old walled city

Another reason for the quiet streets of a town like Bellême is that a lot of the houses are weekend or holiday residences, I assume. A lot of Parisians have houses there — Paris is just three hours east by car. Bellême looks like a much larger town than it really is. Remember, the population is just 1600. It was double that 150 years ago, and has steadily declined since. Bellême used to be the capital of the comté du Perche, which is predominately rural. 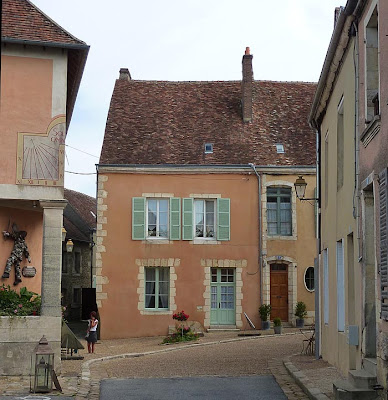 Old houses like these are called hôtels in French. They are
hôtels particuliers, built and occupied by wealthy families —
not hotels in the modern sense of the word.

Bellême is in the middle of a forest that is part of the Parc naturel régional du Perche. The town was founded in the 10th century at the intersection of two roads, one coming from Chartres to the east and the other from Evreux to the north, both leading to Le Mans. The founder, granted the land by the French king, built a château on the spot. A second château was built on higher ground a century later. Neither château exists today as more than ruins. Bellême also claims one of the oldest churches in the Perche. It dates back to the 11th century. 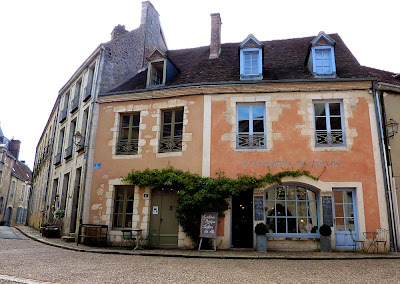 I liked the colorful stucco on the façades
of many of the houses in Bellême.

During the One Hundred Years war inthe 1400s, Bellême was beseiged several times by the English. That's when the ramparts protecting the city, including the gate pictured above, were built. The town was again pillaged and burned in the 1500s by protestant forces during that period's religious wars. So the old houses you see in my pictures of the "old" city date back only to the 17th and 18th centuries. 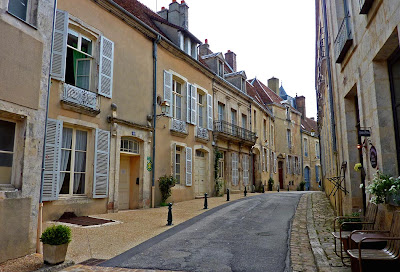 After we wandered through the market and old streets, Walt with Callie to drive back to Saint-Aignan. The rest of us had lunch in a nice Logis restaurant called the Relais Saint-Louis.