The name Bellême, according to what I've read, derives from the Latin word bellissima. I can believe that. When we went there last week, after seeing just part of the nearby town of Mortagne-au-Perche, I was struck by how beautiful it was. Bellême is about three hours north of Saint-Aignan on little country roads. 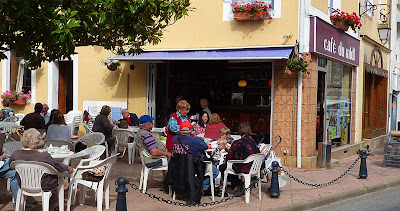 At the front edge of the market we saw the Café du Midi —
the Midi is the south of France. We were in
Normandy but it felt like Provence.

Of course, it didn't hurt that the sun was shining brightly and that it was market day in the pretty town. People were out shopping and taking advantage of the sunshine, carrying their empty market baskets toward the center of town or lugging full baskets and bags home to cook their mid-day meal. We ourselves weren't shopping, but just looking and enjoying the atmosphere. 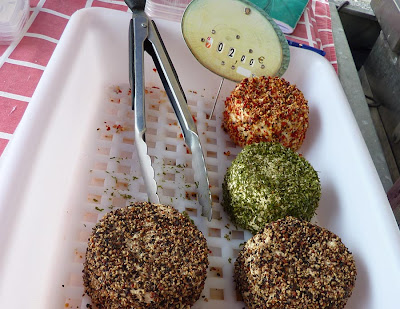 Goat cheeses with an herb, pepper, or paprika crust 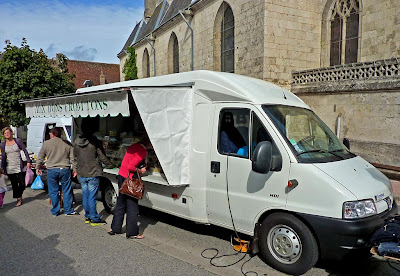 A typical market truck at the Bellême market, selling cheese

A lot of the vendors at French open-air markets drive their specially designed trucks in. Cheese vendors and butchers, especially, use the trucks because they have refrigerated display cabinets. 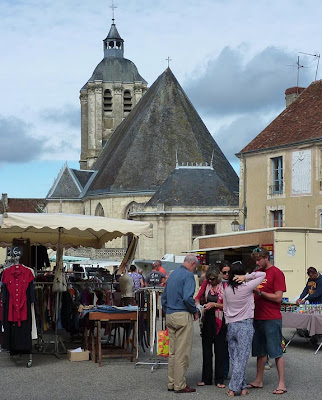 The market sets up around the Bellême church

We talked to the people in the foreground of the picture above because we heard them speaking English. They were British, but the guy in the red T-shirt was Canadian, from Alberta. The British people said they lived in a village just north of Mortagne, and they recommended a restaurant in Bellême. 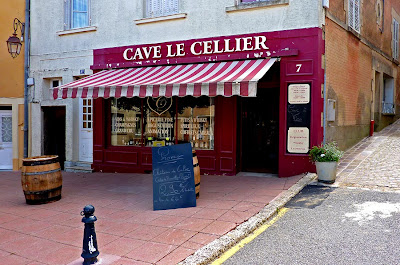 A cave, in commercial terms, is a shop where wine and spirits are sold.
It's pronounced [kahv] and it's a feminine noun — une cave, la cave.
This shop has two synonyms in its name: cave and cellier (cellar).

We were in Bellême on a Thursday morning. Walt was on his way back to Saint-Aignan. The rest of us had a nice lunch in the recommended restaurant, which is in a hotel just below the old town. More about that later.
Posted by Ken Broadhurst at 08:54