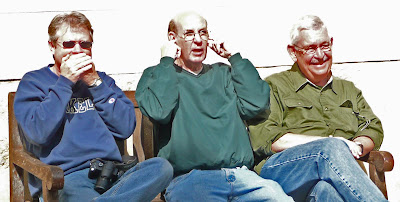 Thanks then to Evelyn for the pictures of people. The one above, plus my current blog banner, as well as the ones below, are photos Evelyn took in Bellême ten days ago. Walt, Lewis, and I sat on a bench along a pedestrian street as Evelyn and Marie looked around in a shop. 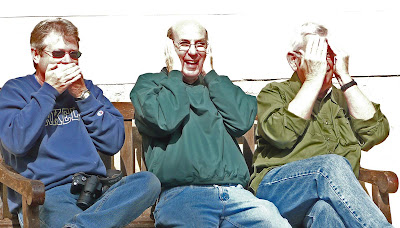 When Evelyn came out to take the picture, we started monkeying around. Speak no evil, hear no evil, see no evil. By the time we finished, as small crowd had gathered to enjoy the scene. That's how we acted as a group during our 10-day visit. The last time we had all seen each other was two years ago, when we spent a few days in Paris together. 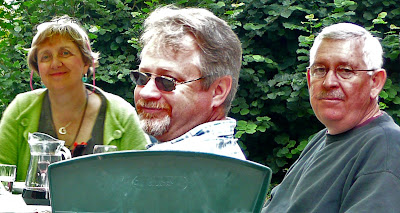 This picture of our friend Marie from Normany, Walt, and me is one we took by putting the camera on a tripod and setting a 10-second delay so that we'd have time to pose. As usual, I have my mouth full of some good food. 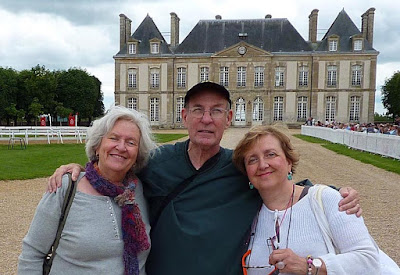 Finally, here's a picture I took at Le Haras du Pin, a big horse breeding and training center in Normandy, north of Alençon. We spent an afternoon there. I needed to post this last picture because it didn't seem fair that Evelyn (on the left) was left out of the other photos.

Evelyn also took this photo of some tomatoes from our garden
that were sitting on a window sill at the gîte near Mortagne.

If it weren't for the Internet, we wouldn't be friends. I met Marie on the 'net in 2000 and in person for the first time in 2001. She knew Evelyn already, and I knew Evelyn on the 'net, but the first time Walt and I met Evelyn and Lewis face to face was in 2004, when they came and stayed with us in Saint-Aignan for a few days. Marie is back in Normandy now, and Evelyn and Lewis are getting ready to get on a plane for their flight back.