Here's another Maxime Le Forestier song from the early 1970s. It's about a tree that grows in the city. As I said yesterday, it's the one I remember the best from back then. Forty years ago, I didn't know anything about San Francisco, so that song didn't speak to me the way it does now. I had been to SF as a 14-year-old on a school trip, but that's all.

What I knew about was Paris. I had spent time discovering that environment, along with spending time in smaller but similarly urban places like Aix-en-Provence and Rouen for a couple of years. Coming from a small American town far from any city, and having spent five years in two different American universities with their tree-lined quadrangles and very green settings, I was impressed with the concrete and asphalt, the "yardlessness," and the tall apartment buildings of French cities. 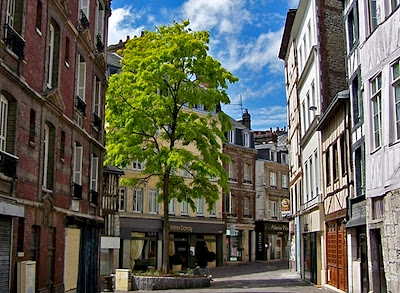 A French street tree — if you are reading Walt's blog
right now, you'll probably see some in his Paris pictures

It didn't hurt that Maxime Le Forestier had a good voice. He wrote and sang songs in French that I could actually understand, even back then. His lyrics and tunes didn't seem silly like so much French pop music did compared to musical styles in the U.S. in the late 1960s and early '70s. There was something Simon-and-Garfunkelish about Le Forestier. I knew he could help me learn French.

Even better, there was something of Georges Brassens in his music, but with a more earnest, less teasing tone. I had discovered Brassens and his songs on my first trip to France in 1970, and I had been lucky enough to attend a performance he gave in a theater in Aix. If you don't know Brassens and his songs, you should. Songwriters like Brassens and Le Forestier are real poets.

A 1973 performance of Comme un arbre... by Maxime Le Forestier

I won't try to translate the song, but I'll describe some of what it meant to me. The second verse, about the forests and families of trees, reinforces that idea that the urban environment is artificial, shutting out the natural world. Le Forestier's tree refers to it brothers, introducing the idea of solidarity between trees in nature, which emphasizesthe loneliness of the street tree. I remember feeling lonelier in the middle of a huge, dense city like Paris or even Rouen than anywhere else I had ever lived.

The tree struggles to flourish and grow in a hostile urban environment. It's branches droop, it suffocates in car exhaust, with little fresh air and little light. The city is a kind of prison where the smoke from factories and cars pollute the environment. To make it clear that the street tree is a prisoner there, the city puts a metal grate around the base of its trunk to imprison its roots.

The tree manages to remain beautiful, nonetheless, and its leaves make a rustling musical noise. The joyful noise goes unnoticed, however, by the people who live shut in behind windows, cut off from the natural world.

And then one day the city comes and rips out the tree because people need yet another parking lot. The parking lot or garage is nothing but some kind of a posthumous reward for the tree that has done its duty to the city. This is another Joni Mitchell similarity — "They paved paradise and put up a parking lot..." — but I think her song came later than Le Forestier's.

Finally, in the last verse it's impossible not to hear references to the "events" of May 1968, when students rose up in protest against the government in Paris. Rioters in the Latin Quarter built barricades in the streets using tree limbs and trunks along with anything else they could get their hands on, and then set them on fire to keep police at bay.

On the show about Maxime Le Forestier I saw a couple of nights ago on French television, a reporter asked the songwriter if his song was one of the first "ecological" hymns, as so many think it was. He said he had never even heard the term "ecology" or "ecology" when he wrote it. That movement hadn't started yet. The song is about people, not trees, I think.

Finally, here's a very nice, more recent performance of the song by a mature Le Forestier, who is on guitar and accompanied by another guitarist.