One of the best known songs in French popular music is about San Francisco. Nearly forty years after it was recorded and released, you still hear it on French radio all the time. The auteur/interprète — singer/songwriter — of the song is a man named Maxime Le Forestier.
Le Forestier has been an influential figure in French music and on the radio since the late 1960s. Maxime is his stage name; his birth name was Bruno. His father was somehow British (either by birth or ancestry — it's not clear) and his French mother lived in England for several years. 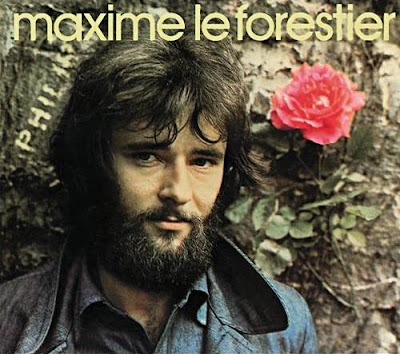 Maxime Le Forestier's first album, released in 1972, has
become known as l'album à la rose. All the songs
on it are worth learning by heart.
Last night a show about Le Forestier and his songs was broadcast in prime time on France 3 television. Born in Paris in 1949, Maxime Le Forstier is about one month older than I am, and I've been listening to his music since the early 1970s. His lyrics are always in impeccable French, and the song called San Francisco (1972) is no exception. His voice is pleasantly rich, and his songs are little poems that are satisfying to learn and listen to.

Here's the original version from the 1972 album, with video
taken by French tourists enjoying a trip to San Francisco.
Another of Le Forestier's well-known compositions, for example, is titled Comme un arbre (also 1972), and it's a song about a tree that grows on a street in a big city, with its roots imprisoned under a metal grate, suffocating in the exhaust of the cars that surround it. The city has to be Paris, and this was one of the first songs I learned when I lived for a year in Normandy in 1972-73. It's probably my favorite Le Forestier song, for many reasons. 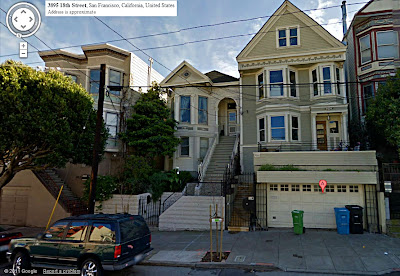 The house that Le Forestier called la maison bleue
was painted green for a long time.
But back to San Francisco. That's the name of the song that has become emblematic in France — of California and America, of the 1960s, and of Maxime Le Forestier as a young songwriter. The reason it's so frequently played these days is that the song is 40 years old (1971) this year and the maison bleue in San Francisco has finally been identified. Le Forestier and his older sister Catherine spent some time there in about 1970. The house was then home to a group of young people living in a commune. Le Forestier's song says the people living there have "thrown away the key," an image of the freedom he experienced in San Francisco. 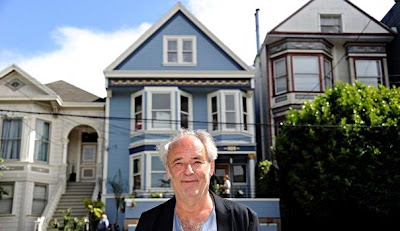 Here's Le Forestier in a recent photo taken in front
of the famous maison bleue in San Francisco.
It turns out that the "blue" house is located at 3841 18th Street, between Church and Sanchez in San Francisco's Castro district, just steps from Mission Delores Park. Listening to the lyrics of Le Forestier's song, you'd get the idea that it was in a less urban neighborhood than that one. The blue house is ...adossée à la colline, he sings, on y vient à pied, on ne frappe pas... (it's "backed up against the hill, you arrive there on foot, there's no need to knock...".

In the music you can see the fog (Le Forestier's lyrics mention "swimming in the fog"), smell incense, and feel warmth. I'm not sure if my memory is good, but to me that neighborhood is not on a particularly steep hillside, but never mind. I would have imagined that the house was up at Twin Peaks somewhere, or in the Haight, somehow suspended up over the landscape in a place where you can see the skyline and the lights of the city at night. Le Forestier says he wrote the song when he got back to Paris, thinking it would be a good present to give his San Francisco friends.

It turns out that, until recently, the maison bleue had been painted a pale green color for many years. Now its owner has had it repainted in blue, and a plaque has been put up commemorating Le Forestier's time there and the famous French song that the house inspired. It's a little bit like somebody identifying the cabarets that Joni Mitchell sang about when she wrote "I was a free man in Paris, I felt unfettered and alive..." and putting up a plaque to commemorate her (and maybe David Geffen).

Here's a more recent performance of the song by its author.
I'm a firm believer in listening to good popular songs as a way to learn expressions, pronunciation, grammar, and the rhythm or "music" of a foreign language. If you want to learn French, you can't go wrong listening to Maxime Le Forestier's songs (among others). So here are the lyrics: