We had the rainiest August in at least six years. We got nearly 90 mm of precipitation in the pluviomètre — that's 3½ inches. We had a wet July too, with about 2 inches of rain. So now people are saying we didn't really have a summer. What they don't seem to remember is that we had three months of warm, dry weather from the beginning of April until the first of July.

So summer came very early and we've basically had a very long autumn — or will have had, if winter doesn't come early as well. Time will tell, as we say. On verra ce qu'on verra. I talked to a neighbor yesterday as he was out in the vineyard picking walnuts from a tree along the gravel road. "They're already ripe," he pointed out. "Tout est en avance cette année." Then he proceeded to tell me that his tomatoes aren't ripening very quickly, even now in September. It's been a strange year. It's good that this roof in Bellême is being repaired.
It's in Normandy, after all, and winter rains are not far off.
We are getting a lot of tomatoes, but the eggplants aren't producing nearly as abundantly as they have in past years. And the summer squash seem to have exhausted themselves — they are over. I have a good crop of lima beans, but the pods are still skinny, not plump. And we have sweet corn, but haven't harvested any yet. We also have quite a few of the little pumpkins called potimarrons. We got pears this year, and some peaches, but no plums or cherries. As usual, we have tons of apples. 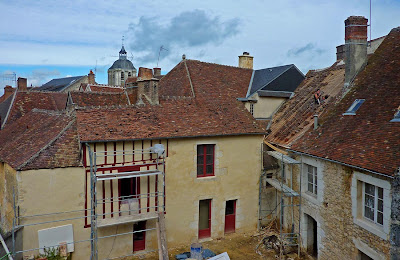 Here's a wider view of the roofing project. All the tiles
are neatly arranged on the roof and ready to be
put back in place over new slats.
In Bellême a couple of weeks ago, we saw two guys working on a roof. The tiles used as a roofing material here in France last forever, but the wooden slats underneath, which they hang on, need to be replaced periodically. We've seen it done here in our hamlet, where part of a neighbor's roof had to be redone a few years ago. The roofers carefully take off all the tiles and stack them on the ground. Then they replace the wooden slats. Finally, they clean up the old tiles with a wire brush and put them back on. It's all very neat and nothing is wasted. 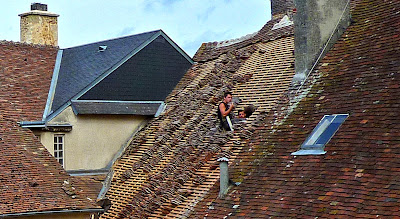 The kid working on the roof called his co-worker out
to see the crazy tourists taking pictures of their work.
By the way, I often joke with our friend Marie in Normandy about the rainy weather up there. It's rainy here in the Loire Valley too, but maybe a little less than in green, green, green Normandy, from Cherbourg to Dieppe, including Bayeux, Caen, Rouen, and Alençon. 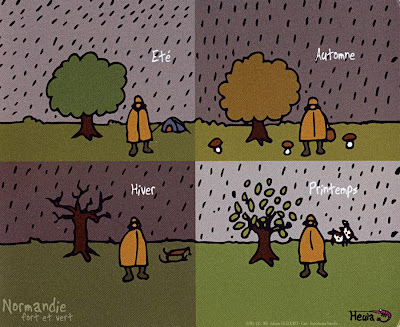 The four seasons as they are enjoyed in Normandy.
In the southernmost part of Normandy, where we went on vacation, is the town of Alençon, which is famous for lace, apples, Calvados apple brandy, and rain. Somebody up there has a sense of humor about the climate. See the photo of my new mouse pad, above.
Posted by Ken Broadhurst at 07:17