Some photos from Alençon

My friends and I were in Alençon for only an hour or two back in late August. But the weather that day was decent, it was market day, and the short visit left me with a good impression. I'd only ever been there once before (with CHM in 2001). 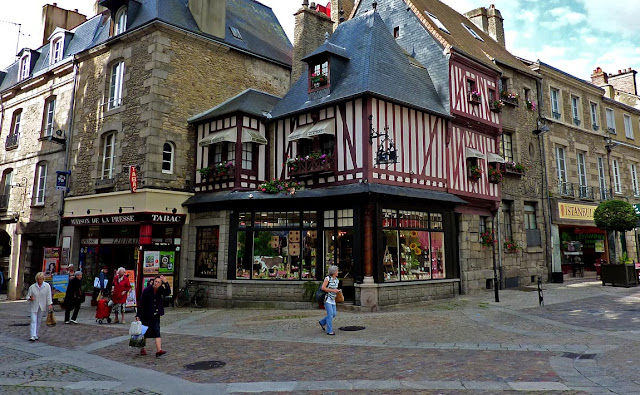 Alençon, near the church and the Saturday marketplace

Alençon is the chief town of the Orne département, in the Lower Normandy region. "Chief town" means that Alençon is the seat of the prefect, a police and administrative official appointed by the national government in Paris to oversee the department. Alençon is not a big town though — its "metropolitan" population is a little less than 66,000. It's only 55 km/35 mi. north of the much bigger town of Le Mans (metro. pop. 305,000). 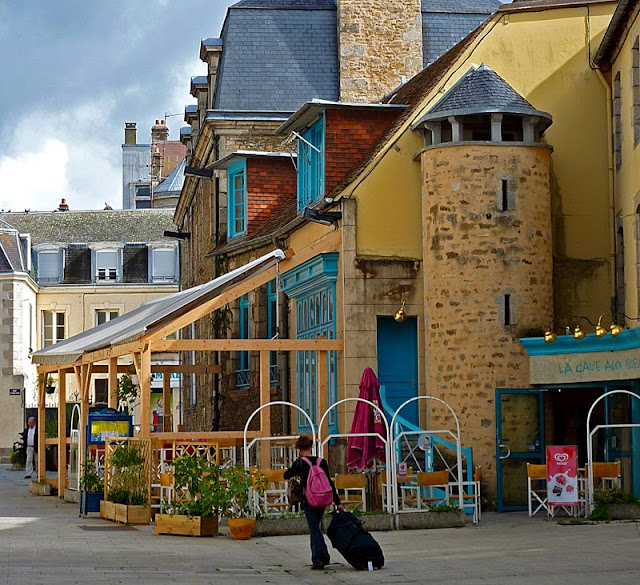 We walked by this restaurant but decided against eating there.

What did we do in Alençon? Basically, we looked for a restaurant. It was 11:30 or so, and I was scheduled to get my train at 2:15. We wandered the streets without finding much in the way of restaurants. We walked through the market because a sign for the tourist office pointed us in that direction. We figured we'd get information and a restaurant recommendation there. And we did. 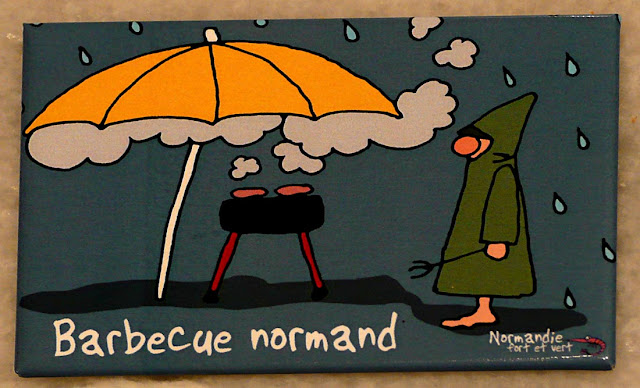 We also found a varied collection of refrigerator magnets, postcards, mouse pads, and other stuff carrying funny pictures and sayings about Normandy and its rainy climate. See the example above. It was funny, because I always tease our friend Marie from Normandy about the weather up there. She lives in Rouen, which is called "the chamber pot of Normandy" — in other words, even the local people admit that it rains there all the time. I lived there for a year when I was much younger. 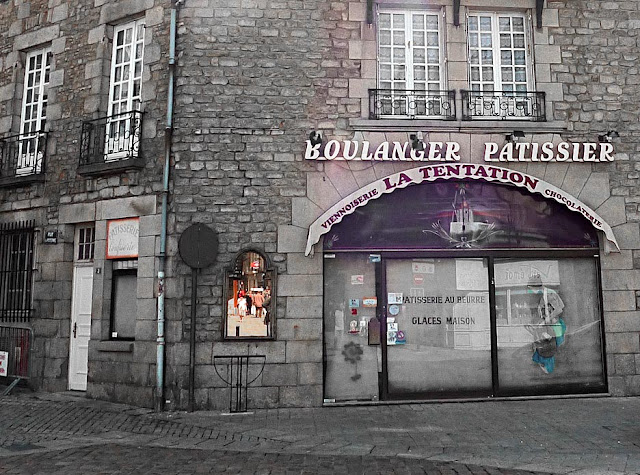 A bakery that's closed on Saturday morning (?) —
maybe it was their fermeture annuelle.

The one restaurant we had walked past, which had an extensive and varied menu, was not one that the tourist office recommended. When we mentioned it, the young woman we were consulting with didn't seem to know anything about it, which surprised me because it was not far from her office and looked like a big place. In fact, she said there weren't many good restaurants in the centre-ville, and that surprised me too. Maybe she prefers the fast-food and chain restaurants in the 'burbs. France is changing that way. 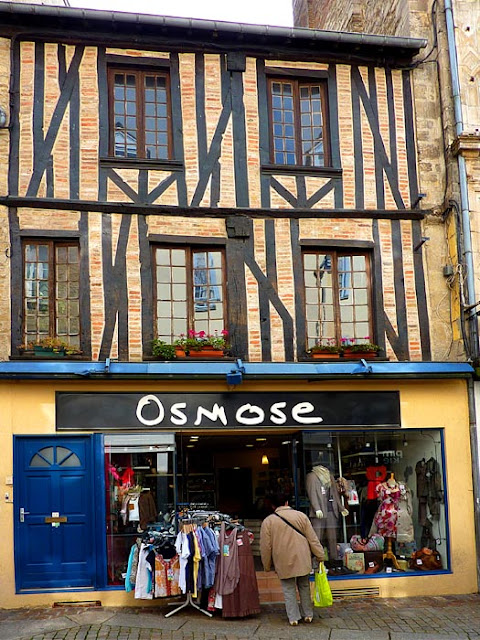 We ended up having lunch in an Alsatian-style brasserie (Les Relais d'Alsace) where one of the specialties was, of course, choucroute (sauerkraut with pork and pork sausages, and boiled potatoes). That's what Marie and I both ate, and it was good, mais sans plus. Evelyn and Lewis had scallops, if I remember correctly, with melted cheese. I always enjoy seeing these old cars in France. This one
is a Citroën Dyane that must be 30 to 35 years old.
It has a nice two-tone paint job.

Marie said she had heard good things about a restaurant called Au Petit Vatel, from friends who used to stop there whenever they drove from Nantes to Rouen, but we didn't find it until we were walking back to the car after having already eaten. Too bad, I guess, but it probably would have been too fancy and pricy.

As I said, the weather that day was decent. It wasn't raining, but it was threatening to. There was intermittent sunshine. I enjoyed the walk-around enough that the next time I'm in that area I'll go into Alençon again. Maybe I'll try the nice restaurant one day, when I'm not in such a hurry.
Posted by Ken Broadhurst at 07:03