After our visit to Carrouges and its château, we drove east back to Mortagne-au-Perche for dinner. The route took us under a dark line of clouds through the towns of Sées and Le Mêle-sur-Sarthe. At Le Mêle we stopped at an Intermarché filling station to put more diesel fuel in the car. The bottom fell out at that moment, and the rain fell hard and straight down. 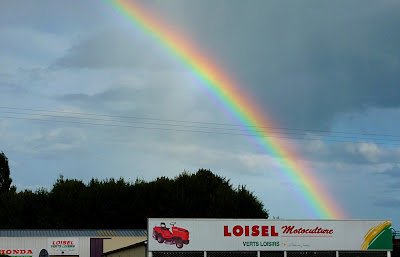 This rainbow formed as we were leaving the filling station
in Le Mêle-sur-Sarthe (late August)
Lewis's chipless American credit card wouldn't work in the fuel pump, and there was no attendant on duty, so I used my French bank card (avec puce) and he reimbursed me with cash. Evelyn and I went into the supermarket to pick up a couple of things for the next morning's breakfast. 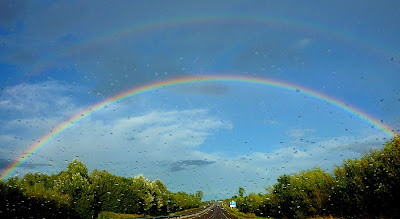 Un arc-en-ciel entre Le Mêle et Mortagne dans le Perche
Click the picture to enlarge it.
As we drove on toward Mortagne, the sun came back out and an amazing rainbow formed out in front of us. We were on a section of road that was more or less an autoroute, so we couldn't easily stop the car. I just took some pictures through the windshield. 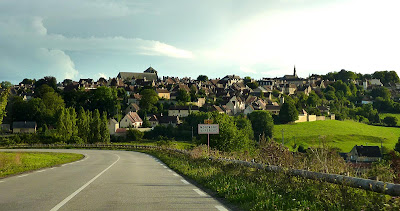 Two views of Mortagne as we drove south into town
When we did turn off the autoroute, we had nice views of the town of Mortagne-au-Perche as we drove in from the north. Mortagne's population is only 5,000 but the town feels larger than that. It bustles with activity, at least during the day. In the evening, the streets are quieter. 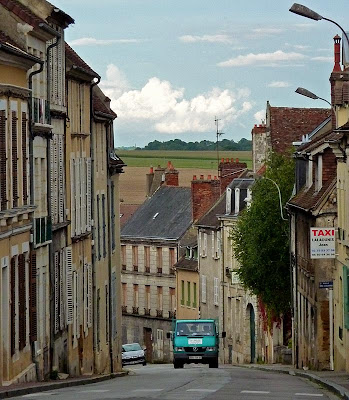 The streets of Mortagne, looking north toward countryside
After walking around the historic district behind the cathedral for an hour or so, taking pictures, we had dinner at a crêperie near the main marketplace. Our vacation was ending, but we had had some very nice days. I have a lot more pictures to post over coming days.
Posted by Ken Broadhurst at 07:26