The day after the horses, I mean. The horse event at the Haras du Pin was thrilling, at least for me. As I said, it was a combination of the beauty of the spectacle, the drama of the weather, and the smiles on the faces of children and adults in the crowd. The word that described it for me in French was émouvant.

After such a good afternoon, you'd think the rest of the things we did in the Perche would pale in comparison. But no. On Friday 8/26 we went to see the Château de Carrouges, which is just 20 miles northwest of Alençon and about an hour's drive from Mortagne, where we were staying in a gîte rural. 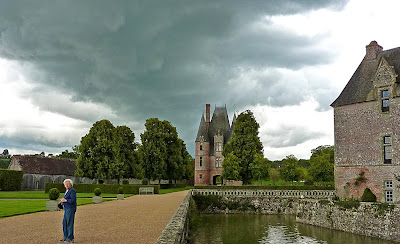 I surprised Evelyn by getting her in this shot at Carrouges.
Click the picture to enlarge it.
I'd been to Carrouges before — once with CHM in 2001 and again with Walt and our friend Sue from California in 2006. Each time I've seen it, it has been a thrill. Carrouges is a big brick building surrounded by a moat, with a separate gatehouse. It's on the edge of a small town and surrounded by many acres of prairie and forest. The moat features honking geese and croaking frogs. 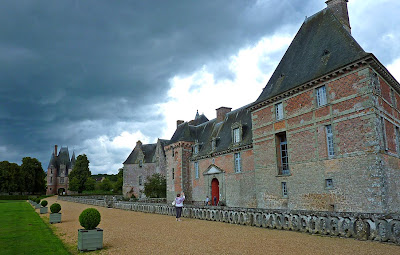 Marie from Normandy taking a picture
at the Château de Carrouges.
Once more, the weather was dramatic. After we had finished the guided tour of the interior of the château, which was owned and occupied by the same family for 450 years (late 1400s until 1936), we emerged to a long band of dark black clouds and loud rumbles of thunder. However, it didn't rain. 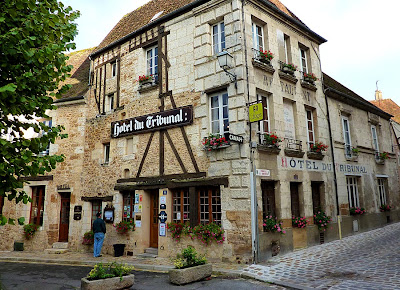 After the trip to Carrouges, we returned to Mortagne-au-Perche
for dinner. That's Lewis studying the restaurant menu
at the Hôtel du Tribunal.
In more local news, the tomatoes have come in. Walt went out and picked enough to fill two buckets yesterday afternoon. Some of them have started to split because of all the rain we've had, so it is time to cook them. They'll either get dried in a slow oven for a few hours and packed in glass jars, or cooked into sauce and frozen in plastic containers. 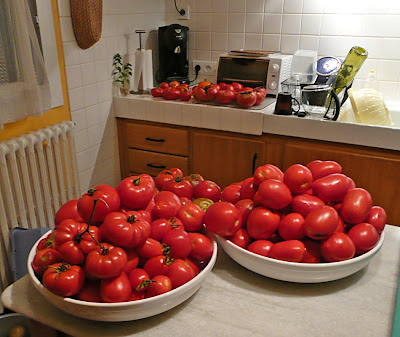 Part of yesterday's tomato-picking haul
The roar of tractor engines is loud this morning. A grape-harvesting machine and a tractor hauling a trailer drove up at about 7:00 a.m. The crew is busy harvesting the "black" grapes just on the north side of our property.
Posted by Ken Broadhurst at 07:50