Yesterday morning my friend Bob — we were in grad school together back in the 1970s — came along on my morning walk with Callie the collie. Just out back, we saw two of the crew from the Domaine de la Renaudie harvesting grapes.

Harvesting around Saint-Aignan is mostly done mechanically, by machines. The grape-growers use special harvesters that straddle a row of vines. As the harvester moves down the row, it gives the vines a good shake that loosens the grapes, which are then sucked up into a vat. 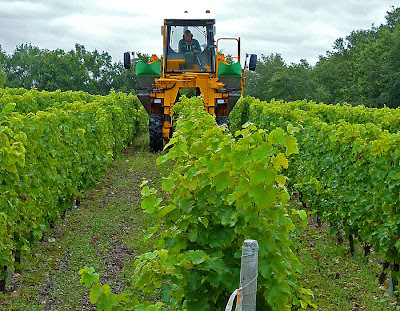 The grape harvester moving along a row of vines
sucking up the grapes
When the vat is full, the guy driving the harvester dumps the grapes into a trailer pulled by a tractor. While he harvests some more, his co-worker drives the trailer-load of grapes down to the winery, where they are pressed. The juice is made into wine. 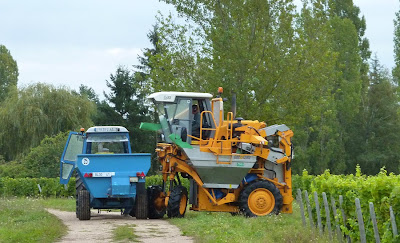 The harvester dumping its load of grapes into a trailer
to be hauled to the winery and pressed
Not all the harvesting is done by machines, however. A little further out in the vineyard, we came across a group of 20 or so people who were picking grapes my hand. They had big black plastic buckets into which they tossed the grapes as they cut the bunches off the vines with clippers. Unfortunately, I was so fascinated watching the process that I completely forgot the take pictures. Maybe I'll get another chance over the next few days.

Finally, here's a picture of Bob and Norma in front of the Château de Chambord for those of you who know them or have heard me talk about them. Spending a couple of days with old friends — we hadn't seen each other in at least 30 years, and hadn't been in touch much either — was one of those experiences where you just naturally pick up where you left off all those years ago. 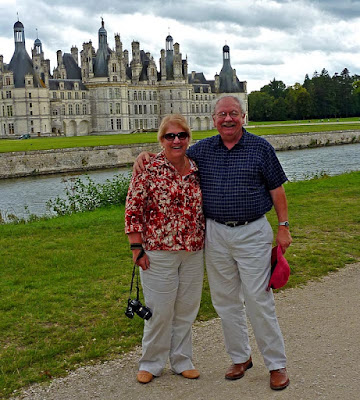 Bob and Norma at Chambord — I snorted and they laughed...
Bob said he had wondered whether we would find things to talk about, and then we talked non-stop for 48 hours. He and I were graduate students together in the French department at the University of Illinois in Champaign-Urbana from 1971 until 1977, when he moved to Boston for a teaching job, met Norma, and got married. I was an usher at their wedding in 1978 before I headed off in 1979 for a three-year stay in Paris.
Posted by Ken Broadhurst at 08:55