I'll do one more post about boudin noir and then I'll try to quit. In England, boudin noir is called black pudding and is sometimes eaten at breakfast. Another name for it is blood sausage, and in Germany (I just saw a French TV show about German food and cooking) it's Blutwurst. I don't know if anybody in America makes, sells, or eats it. It must exist. 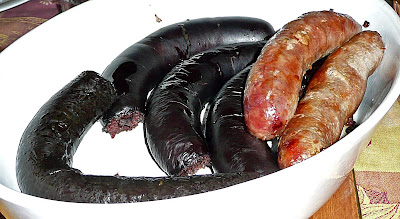 Evelyn took this picture of our boudin noir (along with
a couple of saucisses de Toulouse for the faint of heart).

The blood in boudin noir is pig's blood. You can make boudin using the blood of other animals but it's apparently not as good in taste or texture. In many places, boudin noir is not a horror, but a delicacy. Mortagne-au-Perche is one of those places. I find boudin noir quite tasty myself, but very rich and filling (as Evelyn pointed out, based on our experience of it in the Perche). As Marie said in a comment, boudin noir is very rich in iron but also in cholesterol. 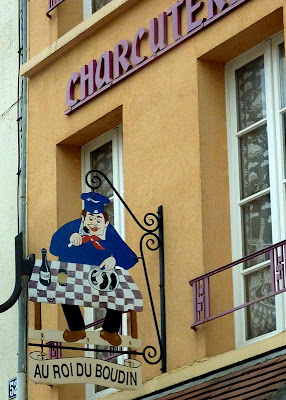 The English word "pudding" derives from the French word boudin, by the way. Another kind of boudin in France is boudin blanc. For that the filling is made of pureed white meat (veal, pork, or poultry) mixed with bread crumbs and eggs. Both boudin noir and boudin blanc are traditional Christmas and New Year's dishes, but nowadays they are available in French markets and supermarkets all year long. They are sold fully cooked, so they just need re-heating in a skillet, in the oven, or on a barbecue grill. 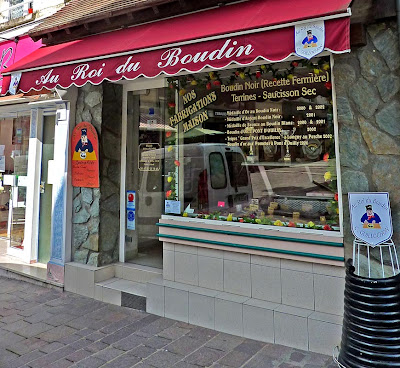 The shop called "The King of Black Pudding" 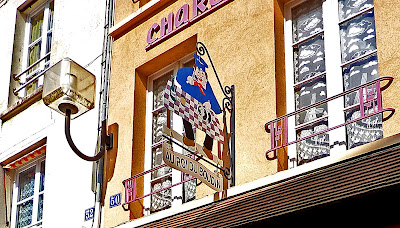 Mortagne-au-Perche has several charcuteries — that's what the pork butcher's shop is called — that specialize in boudin noir. Mortagne is called la capitale du boudin noir and holds an annual festival or foire dedicated to it the third weekend in March. If you want to know how boudin is made, how to cook it, and how to eat it, rendez-vous à Mortagne-au-Perche next spring. It's located about three hours west of Paris and three hours north of Saint-Aignan.