One of the most interesting and memorable things we saw while we were in the Perche region of lower Normandy in August was a horse event. Actually, we almost didn't go. Marie had enthusiastically recommended it, but Evelyn, who really wanted to go too, thought it might be a little too far and too long for me and Lewis. Circumstances combined to get us there, fortunately.
« Un haras » is a horse breeding and training facility. Dating back to the early 1700s, the Haras du Pin the oldest of the 20 existing horse breeding facilities in France. It's always been owned by the French government, and Louis XIV and XV were instrumental in its creation. The haras sits on a 25,000 acre property north of Alençon and owns forty stallions of various breeds. 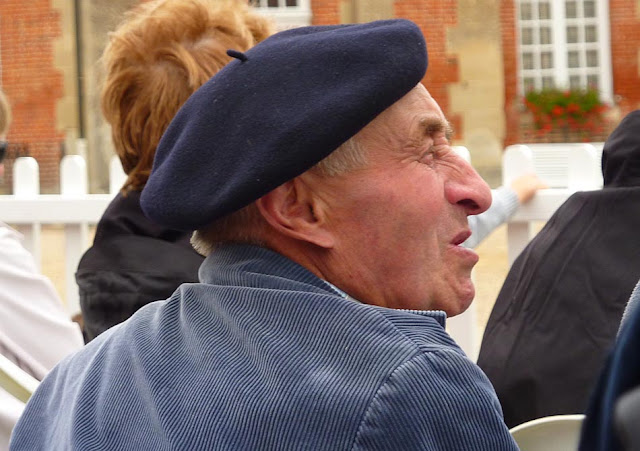 Before the show started, I noticed this stereotypically French face in the crowd.
I have to admit that I wasn't convinced the show was a good way to spend one of our three afternoons in the region. Getting to the village, Le Pin-au-Haras, on winding little roads took us about an hour from Bellême, where we had had lunch, and we arrived without a minute to spare for the three o'clock show. Before setting out, we had telephoned a horse farmer near Mortagne who advertised guided tours of his "ranch," but he was on vacation until early September. If he had been there, we would have done that instead. 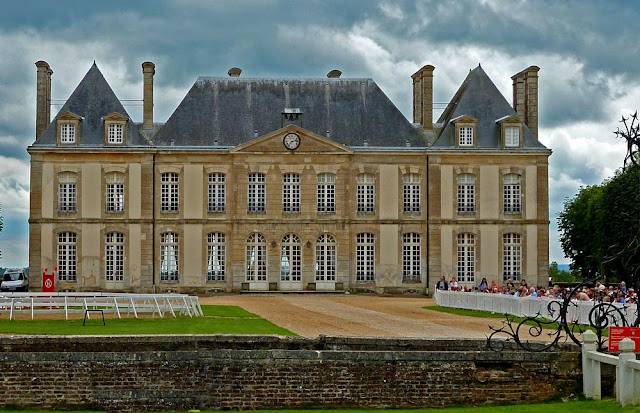 The château at the Haras du Pin equestrian center and, on the right, the crowd gathered for the spectacle
The event at the Hara du Pin was a spectacle that's held every Thursday afternoon, at least during the summer season. A crowd gathers in the big courtyard between the haras stables and the château on the south end of the space. The spectators are very close to the horses as they prance and trot by — and there are dozens of them. The riders and trainers wear striking red jackets and black trousers. 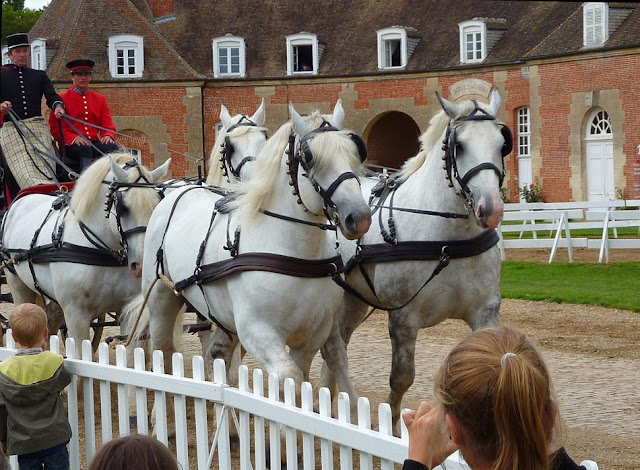 A team of Percheron horses — you can see how close the crowd was to the action.

It was partly proximity to the horses that made the show so spectacular and exciting, as well as the backdrop of red-brick buildings. The weather enhanced the experience by conjuring up dramatically stormy skies and threatening us with rain. Rain it did, but only lightly and briefly — the fat raindrops were a little local color, reminding us that we really were in Normandy.

VIPs got window seats on an upper floor of the château from which to enjoy the show.
During the show I took hundreds of photos, and I've been going through them this morning. I plan to post some of them over the next few days. They're better than I thought they would be, given my little automatic camera, which is just barely fast enough to capture action scenes. (Remember that you can click on the pictures to enlarge them.)

The rest of us stood or sat under umbrellas as rain started to fall.
I took pictures of the horses and riders, but it was the faces in the crowd that made me realize how good the show and the whole experience really was. Everybody was smiling — children and adults of all ages, despite the rain showers. Our hearts were beating to the rhythm of the horses hooves. I was reminded how much I love living in France, where these kinds of magnificent places and special events are part of the experience.
Posted by Ken Broadhurst at 10:10