Last night we had the pleasure of being invited to dinner by Dean and Jean, two Americans from Seattle. You might have seen Dean's comments on this blog. He speaks and writes excellent French. The other guests were three of Dean and Jean's friends from Seattle, as well as two French friends of theirs.

For once, I'm posting other people's photos here. I don't think Dean or Jean or the other photographers will mind. Thanks to Dean for sending the photos. 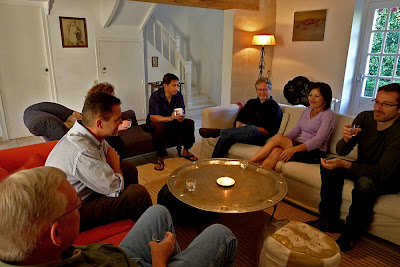 Us waiting for apéritifs to be served in the living room
(there's Walt in the middle of the picture, next to Jean).
The group is spending the weekend in a gîte — a vacation rental — in a village near the town of Montrichard, 12 or 15 miles down the river from Saint-Aignan. The rental house is owned by a couple of Californians who don't live here right now, and it is managed by a French couple named Agnès and Jean-Paul. They live next door. 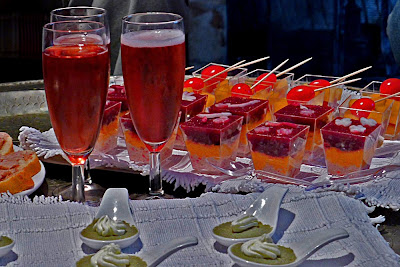 The apéritif treats that Jean-Paul and Agnès prepared and served
Dean and Jean contracted with the property managers to cater a dinner for nine guests, and they prepared a great meal. There were pre-dinner drinks — apéritifs — with finger foods including a purée of artichoke bottoms and a little glass of three other purées — beet with balsamic vinegar, carrot with lemon juice, and radish with curry powder. There was also a big plate of canapés made with duck rillettes. The bubbly wine was a Touraine fines bulles from the Gourmandière wine co-op near Chenoneau château, and was made into kirs with either black currant or blueberry liqueurs. 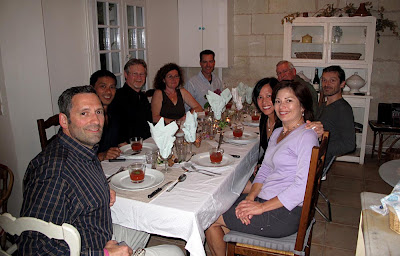 Here are the 9 of us at the table — Dean and I are at the far end.
Dinner started with a crispy pastry stuffed with goat cheese served on a bed of salad with a nasturtium flower for decoration (and the flower is edible). The main course was half a coquelet per person, roasted to perfection and served with a pureed potato and cheese specialty from the Auvergne called aligot. A coquelet is literally a "small rooster" but I think in fact it's what we call a Cornish game hen in the U.S. (and that is neither especially Cornish, it's not necessarily a hen, and it's not game but tame).

The wines were a Saumur-Champigny, a Bourgueil, and a Cheverney, all local reds and all delicious. 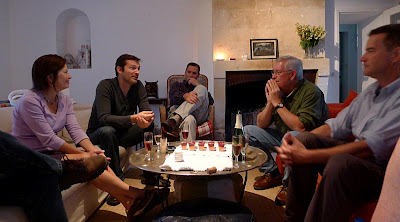 Here we are again, in the living room enjoying a glass
of sparkling wine and some cocktail foods.
Okay, those are the technical details. The party was lively with a lot of good conversation in French and in English. We talked about how Dean and Jean met their two French friends, one of whom lives in Paris and the other, by a complete coincidence, in Saint-Aignan. We talked about life in the the Loire Valley — the food, the sights, the climate, the people... We talked about Seattle.

I can't do it all justice here. It was extremely convivial, as they say in French. The evening was a reminder of the power of blogs. It was yet another great experience for us with people who feel like new friends — people we would never have met if it hadn't been for the Internet and blogs.
Posted by Ken Broadhurst at 08:05