This is France, the land of human rights, high fashion... and wine and cheese. Salers is no exception when it comes to wine and cheese. Well, wine isn't made in Salers, or even just outside, but there is good and interesting Auvergne wine. The cheese, of course, is made all around what is called the Pays de Salers, the outlying hills and valleys.

Cheese. I've already written a lot about it, and published a lot of pictures of Salers cows. But here, to add to all of that, is a photo of the market stand on the main square in Salers where we bought our first Auvergne cheeses. 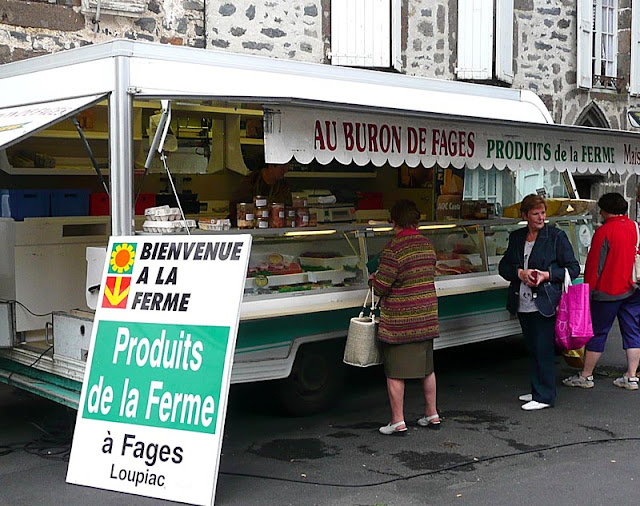 Buying cheese and ham at the market in Salers —
"Welcome to the farm," the sign says.

The woman in the little market coach had a good selection of cheeses made on a farm just outside Salers, as well as cheeses from a little farther away. She was also selling jambon d'Auvergne, like the ham I showed yesterday with the Pounti recipe (link to photo). I think — I'm sure — she was also selling Pounti, in fact. But I didn't know what it was, and I neglected to ask. 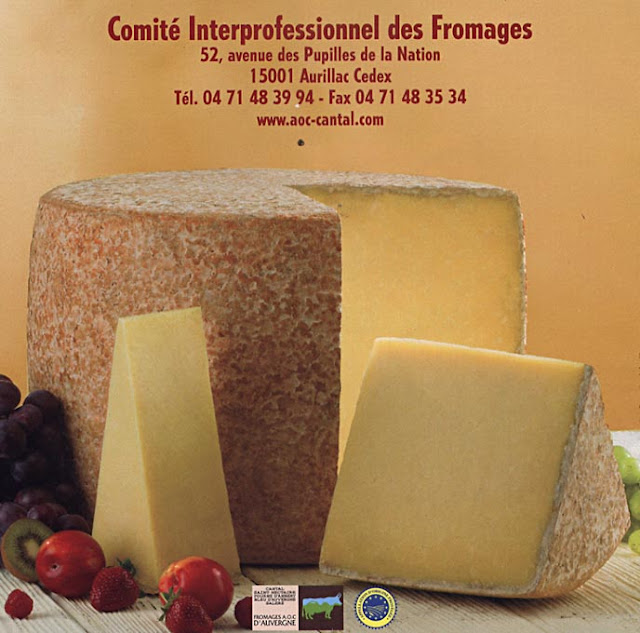 The back cover of the brochure we got
at the cheese stand in Salers...

What we did ask about was the cheese. There was Salers, there was Cantal, and there was Tome Fraîche. What were the differences? The woman explained patiently — enthusiastically, actually — to me, Evelyn, and Linda. I was translating and enjoying myself. The woman was willing to spend some time talking to us. 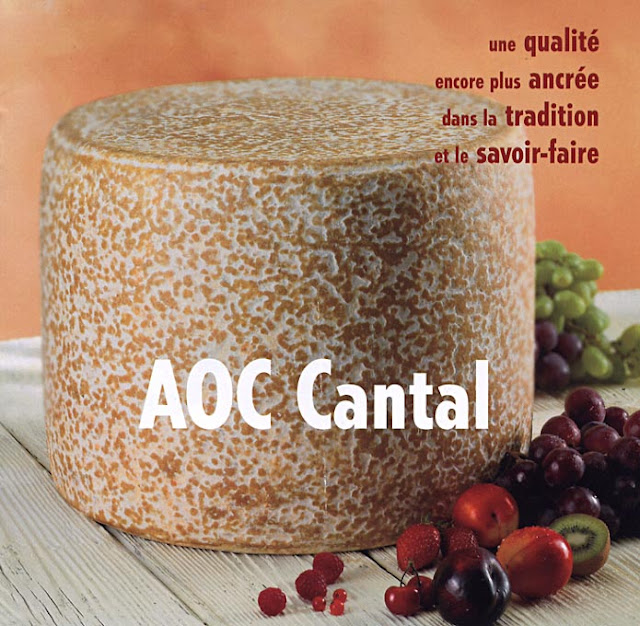 ...and the front cover

She had "young" Salers cheese, made last May. We tasted and bought some of that. There was a more mature Cantal from last January, and we tasted and bought some of that too. And then there was a 2008 Cantal that had recently won a gold medal at some Paris food event. We tasted that one too, but I don't think we bought any — compared to the two others, it was pretty crumbly and strong. It was a little too sharp for us, but would have been good with a dark red wine. 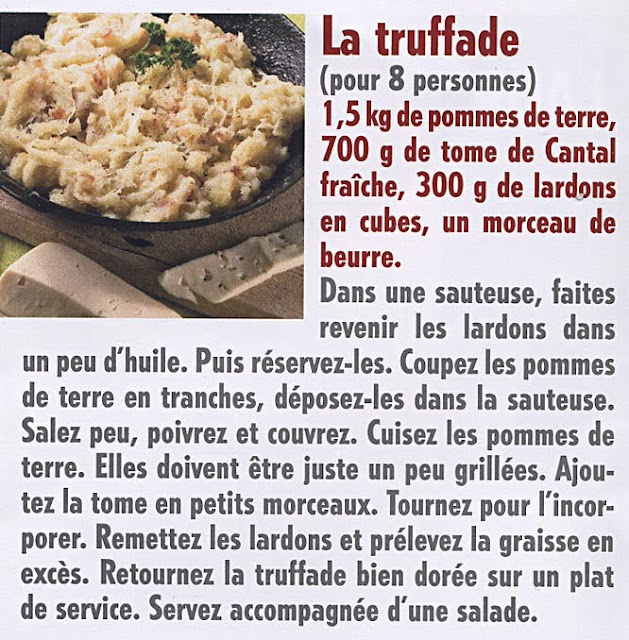 The recipe from the brochure

Linda noticed the tome fraîche and wanted to buy some of that. The woman selling the cheeses quickly pointed out that tome is not a cheese to eat the way you eat Cantal or Salers — it's cheese to cook with. Melting cheese. It hasn't been salted, and it is pretty bland. I knew about it, but at that point I didn't know about the cheese-making process and the salting that fresh tome gets before it becomes Cantal. We tasted and bought some tome too.

I mentioned aligot to the cheese woman — aligot is a dish consisting of mashed potatoes made with tome fraîche and garlic — a local specialty. Walt and I had some in Paris a couple of years ago, in a restaurant called Aux Ambassadeurs d'Auvergne, near the Pompidou Center. It seemed like a lot of trouble to make, because you have to beat the potatoes and cheese until the mixture will form long strings when you lift it out of the dish with a wooden spoon. 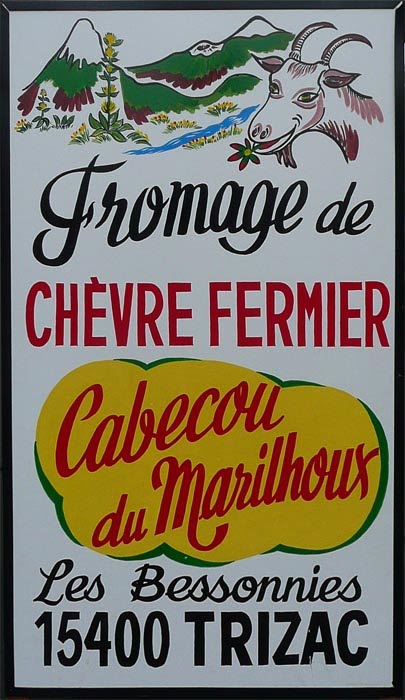 There was goat cheese on sale in the market in Salers, too,
but we had brought some with us from Touraine.

The cheese woman told me another way to use fresh tome is in something called truffade. It turned out that truffade has nothing to do with truffles, the expensive fungus balls that pigs and dogs are trained to sniff out in the Dordogne and in Provence. In Auvergne, truffade is a dish of potatoes sauteed with lardons (salted or smoked bacon, again) and tome cheese. Onions and garlic are optional. I told you Auvergne food was rustic and filling.

To finish our shopping at the cheese vendor's, I also bought some Auvergne ham and pieces of two other local cheeses, Saint-Nectaire and Bleu d'Auvergne. All that was going to be our dinner.

We made truffade at the gîte that night, and it was excellent (if I do say so myself). We had a big green salad with it. And some of the cheeses and some Auvergne ham that I bought. The next day several of us had truffade at lunch in a restaurant in the village called Tournemire. We all agreed that our home-made truffade had been more delicious. 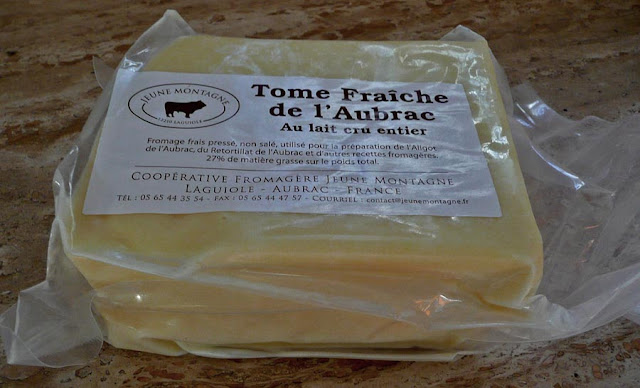 I'm going to make truffade again tomorrow, using some tome fraîche that I bought at the market in Noyers on Sunday. It's not Tome de Cantal, but Tome de l'Aubrac, a similar cheese from the area just south of Auvergne. Then I'll translate the recipe and take some pictures too.
Posted by Ken Broadhurst at 09:11