An afternoon at a funeral

I just re-read yesterday's post because I don't know where to start this morning. I wrote an e-mail to Walt yesterday to tell him about the funeral on Tuesday, which took place as he was flying over the Atlantic toward Boston. Here's an edited version of what I told him.

I went down to the church at about 2:00 as I had planned. I parked my car up at the Salle des Fêtes, next to Mme Barbier's car (she's our barber and that's really her name). I made my way down into the village center on foot along a gravel path. There was a pretty good crowd gathered in front of the church and library, with everybody just standing around and waiting. The hearse carrying the casket and flowers drove up just as I got there. 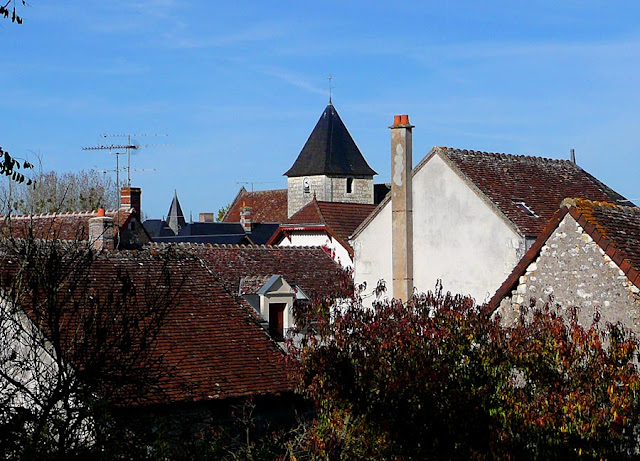 I saw and greeted our plumber as well as the owner of the Garage Danger where I bought my car in 2003, and our neighbor the mayor. And, of course, Jean-Luc's father. He was dressed in a sky blue suit with a pink tie. The man is only about 5 ft 2 in. tall, and has white hair and a white mustache. It was a bright sunny day, and he really stood out against the gray stone buildings — but he still managed to look somber. It's hard to bury a 52-year-old son — your only son.

Jean-Luc's two sisters and his companion, S., were already inside the church, the father told me, setting up the music that was to be played (Johnny Hallyday CDs) and rehearsing their eulogies. Other people I saw were old Mr. Denis, dressed in pale green and plaid, and his wife, but they didn't seem to recognize me. Their son Bruno and his wife Patricia operate the winery that owns most of the vineyard out behind our house.

Later I saw Bruno Denis in the church and he greeted me with a handshake, but I didn't see Patricia. Jean-Luc was Bruno's cousin, I gather. I also saw our neighhbor B. from Blois, but not his wife — she had told me she wouldn't be there. Neither did I see Jean-Luc's former companion, who is our friend G., so she followed through on her plan not to attend. She said it was out of respect for S., but I know there was more to it than that.

Some people were fairly dressed up. I got the impression that some of them are people who live in the village and attend all the funerals, whether they really knew the deceased or not. But then Jean-Luc's father was born here and moved back when he retired after a career in Paris. Everybody must know him, especially the older people. They would have known Jean-Luc, at least slightly, and by reputation. 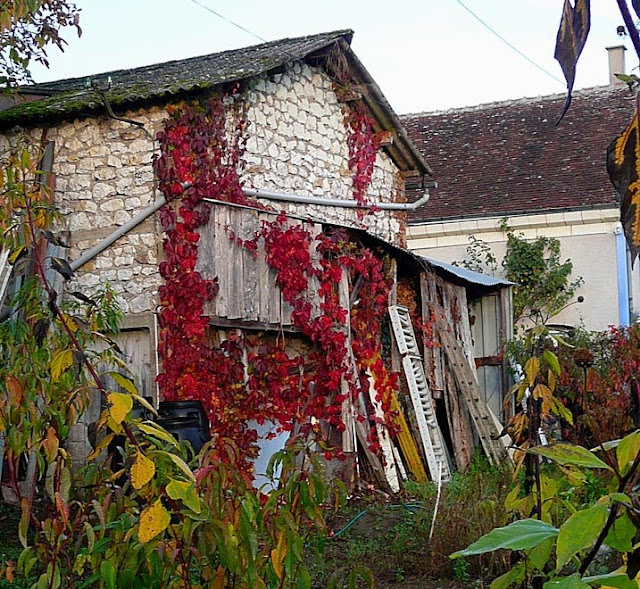 As for clothing, anything and everything went. A lot of people were in black or their Sunday best, but just as many were wearing jeans or other work clothes. If your experience of France is Paris, you've probably been struck by all the thin, well-coiffed people wearing black there. Out here in the country, and even in most Paris neighborhoods where tourists don't often go, the reality is quite different.

I didn't keep track of time, but the service didn't seem very long. The two sisters gave a eulogy together, taking turns talking about their brother's life, but it didn't last very long. They used some words and expressions that were typical of their brother, who was a tease and a kidder. I was pleased to recognize him in what they said.

The priest talked and chanted or sang his parts of the service, and some people sang along. I not only had never been to a French funeral before, but I'd also never been to a Catholic funeral. It's was different from the services we Baptists are used to in North Carolina.

S. did a reading of a poem in English and a translation of it that she, CHM, and I collaborated to put together. Actually, she read the French first, and she did it very very well, with good pronunciation and without stumbling over the words. Then she read the English (perfect of course). She was there with a cousin of hers from England, and the cousin's husband. I met them before we even went into the church.

At one point the priest said something about the pain and grief of Jean-Luc's father, sisters, and friends, without specifically mentioning his companion. A woman who worked with Jean-Luc and S. told me after the ceremony that she was upset with the priest for that. It may have been an oversight on his part, but it was one he should not have committed.

As it turned out there were quite a few English and American attendees, mostly people who know S. and through her had met Jean-Luc. I myself know almost none of them, but I could pick out people in the crowd who didn't look French. S. told me about some of them when I went to see her yesterday — an American lawyer who practiced in Paris, and English university administrator who retired here, an American doctor who retired here with his American wife. Most live in villages, and they are scattered around the area.

After the service, we filed out past the casket and each person sprinkled water from the baptismal font onto the casket with a ritual instrument that I don't even know the name of. I didn't do that because I didn't know how or want to — making the sign of the cross is not something I've ever done. Anyway, I just stood for a second in front of the casket, bowed my head, said my good-bye, and walked on out into the sunshine.

We all stood around in front of the church for about as long as we had been inside, waiting while the men from the pompes funèbres loaded the casket and then all the flowers back into the hearse. Finally, we all walked behind the hearse up to the cemetery — but not the old village cemetery that I knew about, a new one instead, on the other side of the road and up the hill. I hadn't even been aware that it existed, because it's hidden by tall hedges.

The priest didn't come to the graveside ceremony. I guess that's standard procedure. An old friend of Jean-Luc's did a reading over the casket before it was lowered into the grave, but I couldn't hear him. Family members threw roses into the grave on top of the casket. The rest of us just filed by and again paid our respects. A lot of people crossed themselves, of course.

There were people at the cemetery that I hadn't seen at the church, including two men who are both named Jacques who worked with Jean-Luc quite a bit. Both had been to our house before. S. said Jean-Luc's son was there too, but I didn't see him, or I didn't recognize him. I've only met him once, a few years ago. At the cemetery, I met Jean-Luc's ex-wife for the first time. She lives in a village on the other side of Saint-Aignan.

As it was winding down, at about 4:45, and people were standing around the cemetery in groups of different sizes, socializing, I decided I needed to come home to take care of Callie. I told one of Jean-Luc's sisters au revoir but she made a little fuss and insisted I come to her father's house for the reception. Bring the dog, she said, and S. of course said yes, bring Callie so she can play with her dog, called Mr. Mo. 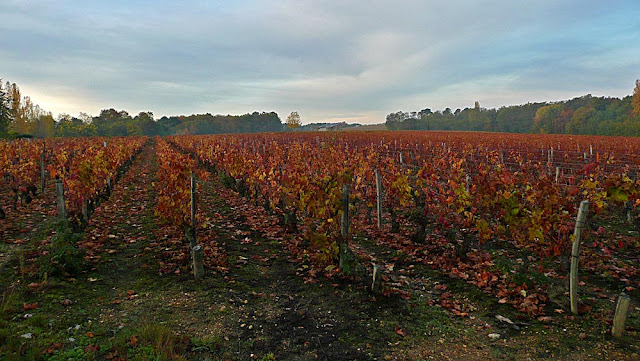 I came on home and Callie and I went out for a pretty good walk in the vineyard. It was nice to get some exercise and to be alone for a little while. Then I went to the reception, leaving Callie at home alone again. My main reason for going, in fact, was to spend some time talking with S.'s cousins from England, who of course didn't know anybody else there. They also don't speak French.

A little later I ended up driving back home to get Callie and then spending the evening at S.'s house with her and her cousins. Callie and Mo played a little. We humans found plenty of subjects of conversation, had a light dinner, drank some wine, and just generally spent a pleasant evening together. The cousins have been to the U.S. many times, visiting many regions, and enjoy talking about it. It was a nice way to end the day.
Posted by Ken Broadhurst at 07:55