This blog obviously needs a new theme. For a week, now... well, you know. "Living with death in Saint-Aignan" might have been a more apt title.

We are out of luck, however. Guess what today is. Hallowe'en. And you know what the theme for that American holiday is. It's not celebrated in France. Or hardly. There was a little flurry of activity around Hallowe'en here a few years ago, but it doesn't seem to have caught on. I don't expect any trick-or-treaters tonight. 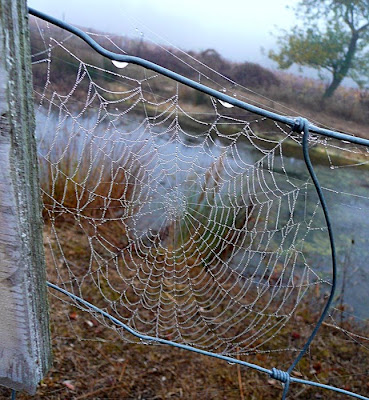 Spider webs on the fence around the pond
on a foggy October 30 morning.
Click the pictures to see them at full size.
And then tomorrow is All Saints' Day — La Toussaint. It is significant 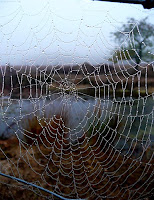 for three reasons. It's the first holiday of the fall season, with school vacations starting last week and lasting 10 days. It's also the day when the weather changes, and the rains start. It happens that way in most years.

And finally, La Toussaint is the day when people make an effort to go to the cemeteries to set out flowers on the graves of their departed loved ones, and to do a little fall cleaning around the graves. The flowers they bring are almost always chrysanthemums. 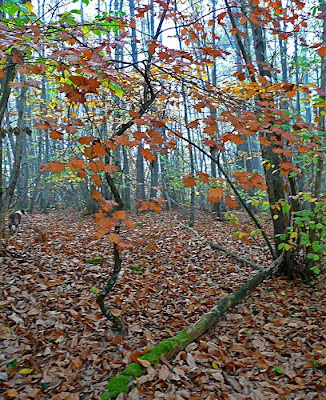 Callie and I tramped through abundant
autumn leaves yesterday morning.
La Toussaint falls on November 1 and is a Catholic 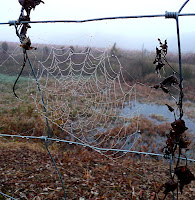 holiday to commemorate the church's many saints — so many of whom died as martyrs. The next day, November 2, is called La Fête des Morts — the Day of the Dead, or All Souls' Day. In France November 2 is not an official holiday, but
November 1 is. That's why people now go to the cemeteries a day early with their pots of flowers.

The newscaster on TéléMatin just pointed out that La Toussaint is one of the deadliest periods of the year on the highways in France. Drive carefully.

Remember the old joke they told us kids a couple of generations ago? "I went to the cemetery, knocked on a gravestone, and I said: 'What are you doing down there?'", our parents or grandparents would tell us. "You know what the dead person said? 'Nothing.' He said nothing." 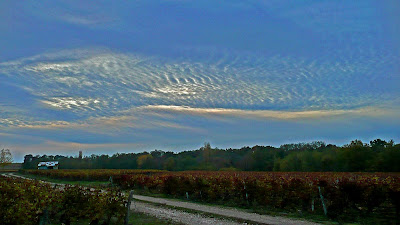 Autumn skies over the Touraine vineyards
We kids would ask, fascinated and horrified, "Are you kidding?" Our eyes got wide and chills ran up and down our spine. We all had to go try it. And when we knocked on a tombstone, asked the question, and the person in the grave said nothing, we were disappointed. It dawned on us that we had been tricked. We felt silly, but we still hoped one day to hear a whispery voice say: "Nothing."

Now guess what the weather forecast for tomorrow is. Je vous le donne Emile, as Coluche said: Rain! It should start tonight, and they say it's going to last all week. Temperatures are falling too. 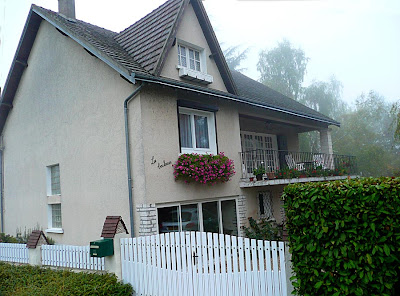 It is the end of the line for the profusion of petunias
under our kitchen window. Au revoir, les fleurs.
I think I'll put the car in the garage and just hunker down. I bought myself a big head of escarole yesterday, so I can make salads with duck gizzards or toasted croutons and garden tomatoes, which are ripening in boxes in the pantry. I also bought some beef chuck, so if it turns cold I can make a pot of Bœuf Bourguignon.

I'm set for a few days. Better do some garden work today though.
Posted by Ken Broadhurst at 06:44