Oeufs en meurette — a typically Burgundian dish. I got interested in it back in late August when I was in Paris and had dinner in a restaurant with a group of friends. One of them, the oft-mentioned CHM, who was putting me up for the weekend, ordered a light dinner of eggs in a meurette sauce that evening at the Fontaine de Mars restaurant.

I was seated next to CHM and, while the food I had ordered was also very good, I couldn't help but admire the plate of soft-cooked eggs floating on a red wine sauce that he was enjoying. It didn't look complicated to make, and both CHM and I said we would try, separately, to make our own versions of it soon.

Well, I made mine the other day. I looked up recipes on the Internet, and I found at least four of them pretty quickly — French ones. One gave proportions to go with a dozen eggs, another eight eggs, and another six. I wanted to cook only four. As for the ingredients, they were all similar except in minor details. I decided to take the best of each, using my own judgment. 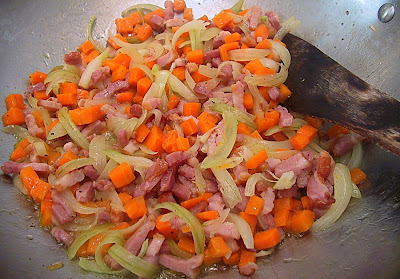 Onions and pork lardons — bacon — are the base for sauce meurette.
I added carrots but mushroom would be good too.
Actually, we had made Oeufs en meurette on the spur of the moment back in mid-September when another friend, Peter Hertzmann, from here from California. I made the sauce with Peter's advice and assistance, and then we poached some eggs. We neglected to drain the poached eggs well, however, the the excess water on and in them made the sauce too liquid. For a first attempt, it tasted good but it wasn't a roaring success.

Here's the recipe I ended up with for the sauce I made a couple of days ago:

Meanwhile, cut the carrot into fine dice and slice or chop the onions. Cut the smoked bacon — or ham — into dice (or rectangular lardons). In a skillet, sauté the onion, carrot, and bacon together in a little oil or butter until they are tender and cooked but not really browned, about 10 minutes. Keep the heat low, and cover the pan for part of the cooking time to steam the vegetables and make them tender.

When the seasoned wine has reduced by a third or even by half, stir in the bacon, onion, and carrot mixture and continue cooking it for 10 to 15 minutes.

If you want to thicken the sauce, dissolve a teaspoonful of corn or potato starch in ¼ cup of cold water. Potato starch is better, I think. Slowly pour the dissolved starch into the hot meurette sauce, stirring well so that it doesn’t form lumps.

The other way to thicken it is to make beurre manié — softened butter mixed with flour until it’s a smooth paste, and then whisked into the sauce.

If you don't thicken it or if you use dissolved starch, you can enrich the sauce at this point by stirring in 2 Tbsp. of cold butter until it is melted and incorporated. 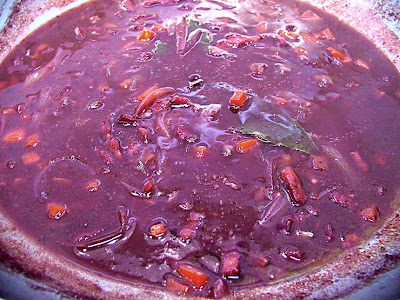 Here's the sauce reduced and thickened.
I don't know if that reminds you of anything, and I didn't really think about it until I read about it in Waverly Root's book The Food of France. As he says in his chapter on the Burgundy region:


"The sauce that goes with bœuf bourguignon [Beef Burgundy] is one variety of what Burgundy calls meurettes, a general name for all of the wine sauces that are basic to Burgundian cooking. They're usually well spiced, thickened with flour and butter, and appear in varied forms to go with many different dishes of meat, fish, or eggs."

Mr. Root doesn't mention poultry, but the sauce of red wine, onions, lardons, and mushrooms that is the essence of boeuf bourguignon is also the essential sauce for coq au vin — chicken in red wine sauce.

According to the dictionary, in texts dating back to the late 1500s and early 1600s there are references to a dish called oeufs à la murette, and the spelling meurette would be a regional variant of that term. Murette shares its derivation with the term saumure, which means "brine" in French and comes from the Latin muria, meaning "dissolved sea salt." So on some level, a meurette is a salty sauce that accompanies meat, poultry, fish, or eggs. 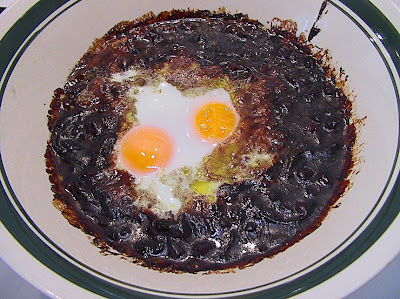 Eggs in a meurette sauce
When fish is cooked in or served with a red wine sauce, the dish is called a matelote — a matelot, without the final E, is a sailor. Chicken becomes coq au vin, and beef become boeuf bourguignon (or boeuf à la bourguignonne). The version of the dish with eggs is called oeufs en meurette.

I've found recipes for meurette sauce that don't contain bacon. When included, the bacon can be either the smoked or the unsmoked kind. Some recipes call for shallots and onions, but no garlic. Many don't include the vinegar. Others say to use equal quantities of red wine and water rather than just wine. Putting in diced carrot was my idea, because I like carrots and think they are good for me. Mushroom would be good too, as in the red-wine sauces for beef and chicken.

One old French recipe says to heat up the red wine with onions, herbs, and so forth, and then strain the wine and poach the eggs in it. Set the poached eggs aside while you reduce and thicken the sauce, and then serve it with the poached eggs. The recipes are all over the map. A Google search in English turned up a lot of them.

If using a whole bottle of drinkable red wine to make a sauce to serve with four eggs seems extravagant to you, remember that in France you can buy a decent bottle of red wine for 1.50 or 2.00 euros — especially if you live in wine country, as we do. Wine is a commodity, not a luxury product, here. Everyday Loire wines — Gamay, Côt, Pinot Noir, or Cabernet Franc — are very good for making this sauce.

In Ginette Mathiot's classic French home-cooking book called Je Sais Cuisiner, there's a recipe for eggs in a meurette sauce in her chapter on regional dishes. She says the sauce can be served with hard-boiled, soft-boiled, or poached eggs. The dish that CHM had at the restaurant appeared to have had the eggs broken raw onto the hot sauce and then cooked either on top of the stove or in the oven until the whites were set and cooked. 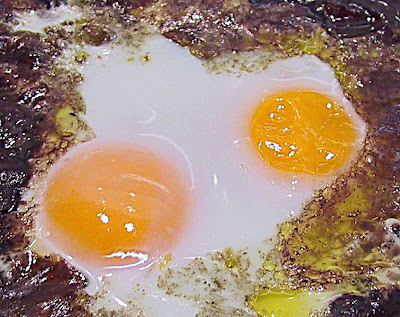 Those eggs — two of them, anyway
We had tried poached eggs en meurette in September, and that attempt was only a partial success. Poaching eggs is a lot of trouble, and unless you are more talented than I am they don't always come out perfect. Putting the eggs raw on top of the sauce and letting them cook that way seemed like a better plan.

The problem was, when I broke two eggs into a bowl and then tried to slide them onto a bowlful of sauce, the eggs promptly sank! I think I had put too much sauce in the bowl — it was too deep. The yolks were right next to each other like two closely set yellow eyeballs staring at me, and the whites, well, didn't spread out over the surface. I was more careful in sliding the eggs onto the second bowlful of sauce, but the result wasn't much better.

Anyway, the sauce was delicious, and the eggs did finally cook, after 5 or even 10 minutes in a hot oven — especially when we stirred the whites into the bubbling sauce at the table. But the yolks got a little too hard, and the sauce turned brown. I think next time I'll just fry a couple of eggs sunny-side up in some butter and then slide them, cooked, onto the hot sauce. Or I'll make soft-boiled eggs.
Posted by Ken Broadhurst at 08:04