The first morning we were in Auvergne, in early September, we decided to start the day by taking a walk through the little town of Salers. It was foggy and even misty, and when we first got there the streets were nearly empty. Obviously, the town was just opening up for the day.

In our walking we passed by a little gallery selling paintings of local scenes by local artists (I assume). It was warm and inviting, but we didn't go in. I snapped a picture through the front window of the shope, and then I noticed a particular item in the window display. 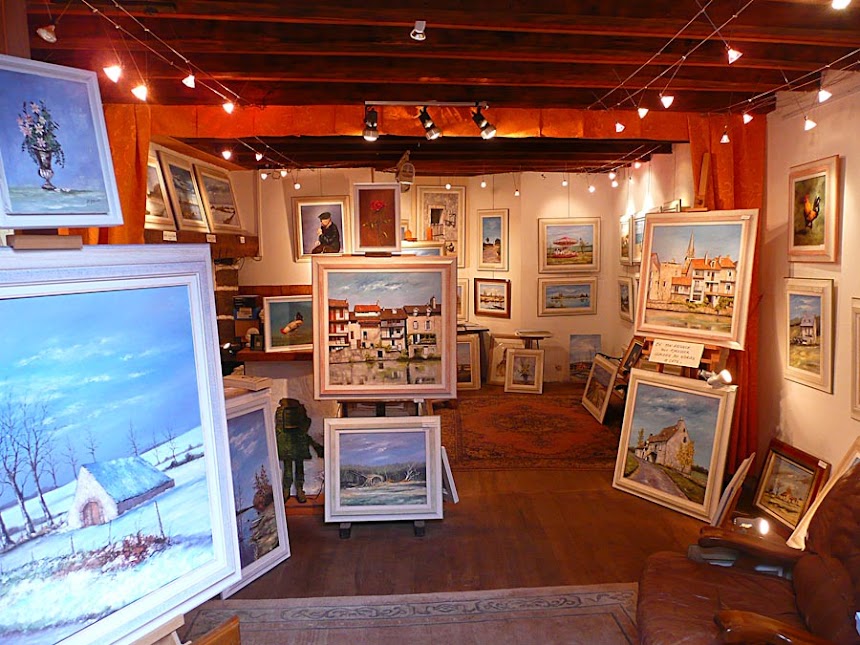 An art gallery in Salers
The "caption" on the artwork I was looking at said it represented the Château d'Anjony, in the village called Tournemire. I had seen Tournemire on the map, and I had seen an article about the Anjony family in old old edition of the Michelin Green Guide for Auvergne that my Paris friend CHM let me read. 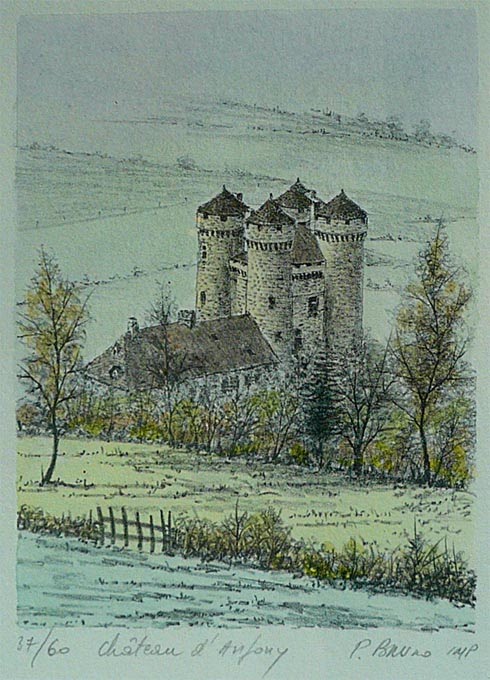 This piece caught my eye — a preview
of Tournemire seen in Salers
I had scanned some pages from that old Michelin Guide — Salers, Val, some maps — but I didn't get to the one about Anjony, so I didn't know much about it. Just that CHM said that it was worth a visit and that it wasn't far from Saint-Chamant. About the village Tournemire, CHM had said something about his mother being acquainted with a member of the old Tournemire family. That family's château is no longer standing. 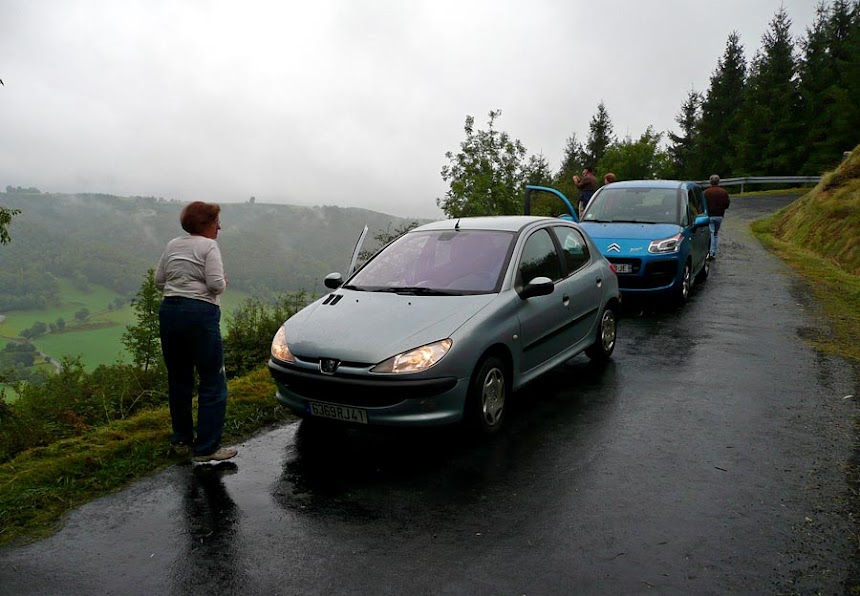 We arrived in Tournemire from the north, through fog
and mist on tiny winding roads. Stopping on such a
curve was probably not smart, but we couldn't resist.

What reminded me of all this today is the talk of rain we heard on the TV and radio weather forecasts yesterday. (By the way, not a drop has yet fallen in Saint-Aignan, but it is cloudy.) The day we went to Tournemire, it was rainy. The valleys over which Salers, Saint-Chamant, and Tournemire have panoramic views, were emerald green. 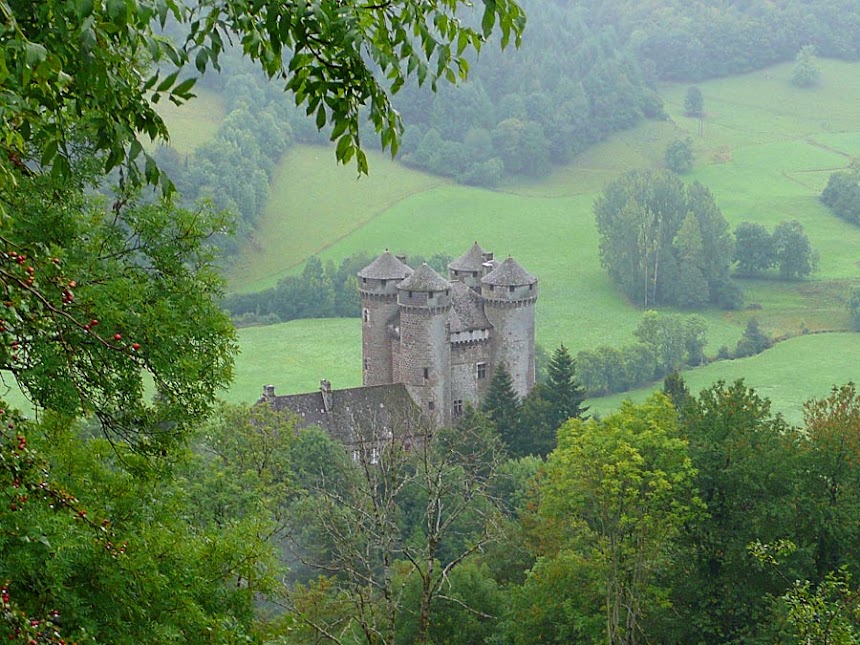 Looking down from the road over the castle and the valley —
this is why we stopped on the road to take photos.

Tournemire was a magical-looking place that rainy morning. Unlike the Château de Val, which is of the same style but has a boat basin full of tour boats, sailboats, and other yachts at its base, the Château d'Anjony seems to be lost in time and floating in space. It was so quiet and still in the village. And the streets were empty. 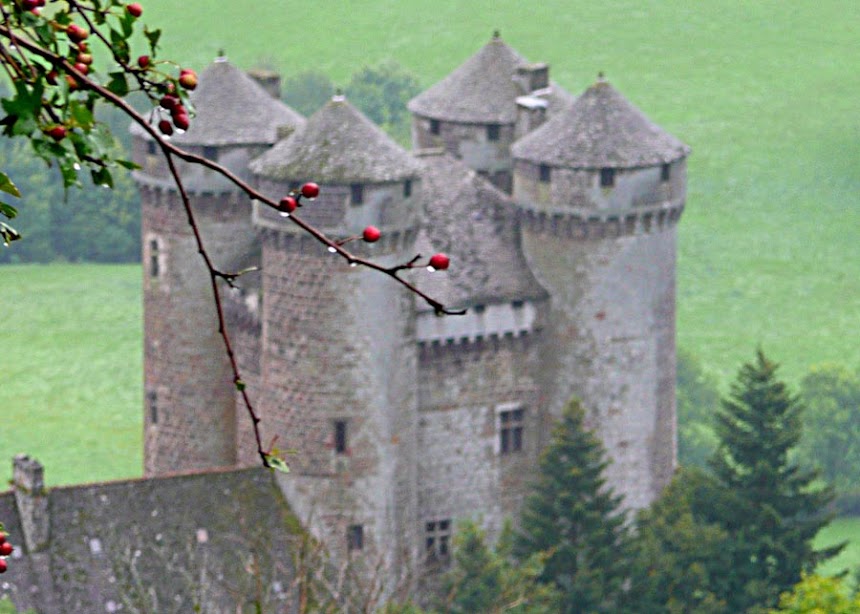 A closer view with a nice « flou artistique » —
that means it's artistically out of focus
Walt has written about Tournemire. I have some pictures of our visit there that I want to post. Walt was walking with Callie, so he didn't go into the church, but I did, and I took pictures inside. We all walked the length of the village, which is « L'un des plus beaux villages de France », as is Salers. The rain let up long enough for us to do so.

P.S. It started raining this morning at 8:00, just as I was going out (of course) for the morning walk with Callie. Earlier it was too dark to go. The moisture was only mist and then drizzle for about an hour, but now it's coming down pretty steadily as bigger drops. Nice.
Posted by Ken Broadhurst at 07:26