No, it's a moth. A couple of days ago, Susan of Days on the Claise posted a couple of pictures of the Hummingbird Hawk Moth, a moth that behaves and even looks a lot like an American hummingbird, but is smaller. We see them here in Saint-Aignan when the weather is hot in July, August, and September.

These are moths that are active in the daytime, feeding on summer flowers. They seem to like bright sunshine, and they certainly like the geraniums we have in planter boxes on our front terrace. Hummingbird Hawk Moths are native to the Old World, but similar moths live in the Americas. 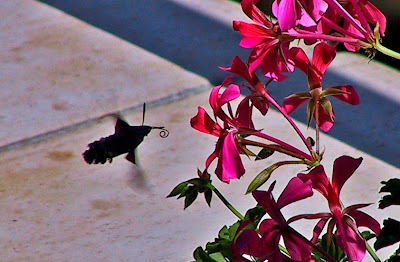 This looks a lot like a hummingbird, don't you think?
But it's not one — it's a diurnal moth.
Like many people, when I first saw a hummingbird moth in summer 2004, I believed it was a tiny hummingbird. We had hummingbirds in abundance in California, and used to watch and photograph them whenever we could. Our good friend Cheryl had (maybe still has) hummingbird feeders outside her big living room window, and there was always a bird or two hovering there, feeding.

Here's a video that gives you at least some idea of what
it's like to see a hummingbird moth in summertime.
Five years ago, when I noticed my first hummingbird moth, called a moro sphinx or sphinx colibri in French — colibri is the French word for hummingbird — I did what seemed natural back then. I went and asked our neighbors if there were hummingbirds in the Loire Valley. They had heard of hummingbirds they said, but had never seen one and didn't think they lived here. I was seeing something else. 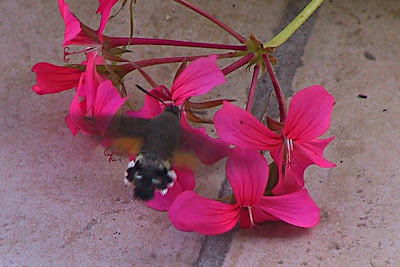 July 4, 2004 — time flies as fast as a hummingbird moth,
and in a blur it's gone...
Then I did what I would do today without a second thought: I looked up hummingbirds on the Internet, probably on Wikipedia. I learned that hummingbirds are American and aren't present elsewhere. That was news to me, and maybe it is to you. There are no hummingbirds in Europe or Africa, for example. But there are Hummingbird Hawk Moths from Spain to Japan. They are migratory too, spending winters in the south where it's warmer. 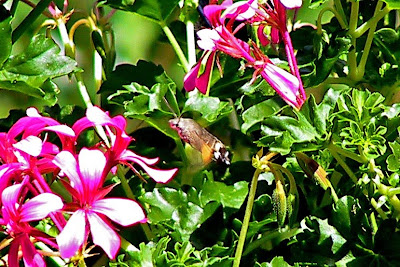 Thanks to Susan for reminding me of these photos
and the video I took back then.
The way these moths dart around, it's hard to get a good look at them. Mostly you see their movement — their wings are a blur — and you see them hovering in front of a flower of some kind. They have a long proboscis that they use to sip nectar out of tubular flowers. There are a lot of good pictures of them on Wikipedia under their scientific name, Macroglossum stellatarum.

I took the pictures in this post on July 4, 2004. That was more than a year before I started this blog, and as far as I can tell by searching through my 1,250 blog posts, I've never put them on the blog before. We have gotten used to seeing hummingbird moths darting around our geraniums and petunias on hot summer days in Saint-Aignan.
Posted by Ken Broadhurst at 07:52