When we drove back from Salers to Saint-Aignan in September, we decided to take the scenic route. Instead of driving on the same roads we had taken to get down there, we came up through Ussel in the Corrèze, and Aubusson and Guéret in the Creuse. 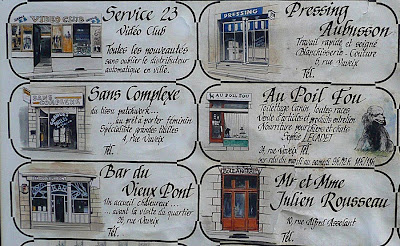 Some of the businesses in "downtown" Aubusson
The départements (counties, more or less) of the Corrèze and the Creuse (which are both rivers — most French departments are named for the rivers that cross them) are two of the poorest in France. You wouldn't really know it, just driving through, though. It's not that they are full of slums or trailer parks or anything like that — you just see very pretty, and very quiet, villages and small towns. 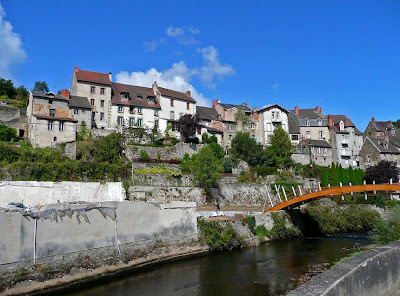 The old faubourg called Terrade at Aubusson,
on the banks of the Creuse river
Both departments, like the ones in the Auvergne just to the east — the Cantal being one of them — have suffered generations of out-migration and are seriously underpopulated. In the Corrèze, for example, nearly 20% of all the housing units are actually second homes — résidences secondaires — that sit unoccupied most of the time. 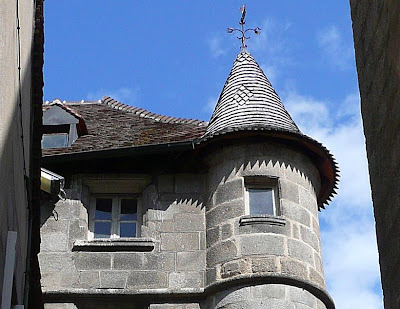 An old turret on a house in Aubusson
In the Creuse department, there are 22 inhabitants per square kilometer. In the department where we live, the Loir-et-Cher, there are 50. So you probably see only half as many people when you pass through the Creuse. It feels kind of empty. The department right next to ours, the Indre-et-Loire, with Tours as its main city, has a population density of 95 people per sq. km. And in the Ile-de-France, with Paris at its center, the figure is 975 per sq. km. 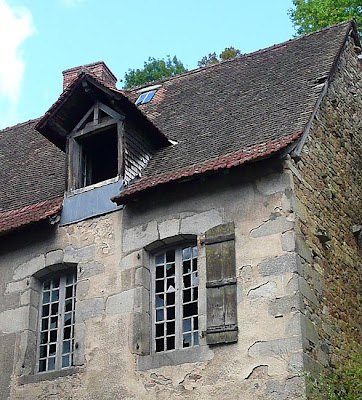 This Aubusson property might be available for purchase...
Aubusson was the town I really wanted to see. I don't know about you, but sometimes I'll see a town on the map and realize I've heard the name for years, or decades, but I've never seen the place. That really makes me want to go explore. I felt that way about Salers. And about Aubusson. The famous Dame à la Licorne tapestry — the unicorn tapestry in the Cluny museum in Paris — was manufactured there. 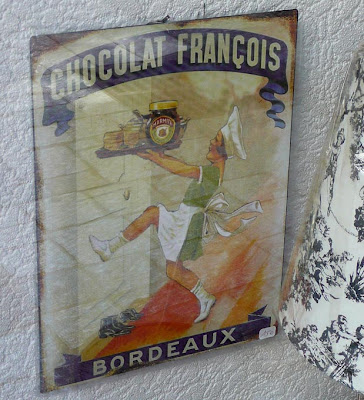 Seen in a shop window
About 100 years ago, the population of the town was 7,500, but now it's down to about 4,000. Since the 1400s, Aubusson has been renowned for the beautiful tapestries produced there, and as late as the beginning of the 20th century 1500 to 2000 people were still employed in that industry. It has declined dramatically since then. As a result, the town has lost population. The decline was accentuated when a local Philips electronics factory closed down about 20 years ago. 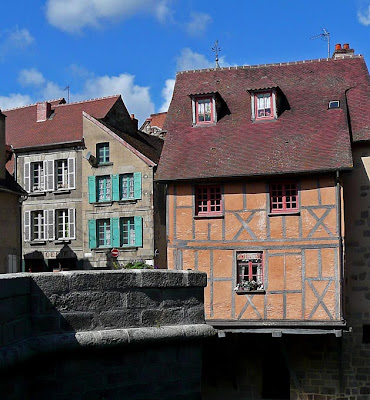 Antiquités
Still, Aubusson is the third largest town in the Creuse department. People have lived on the site since Roman times, and there is evidence that there was a settlement there during the Iron Age. Since the Middle Ages, local men have been recognized as skilled brick masons, and many men have left the area over the centuries to work on building projects in places like La Rochelle in the 17th century and, especially, Paris in the 19th century. 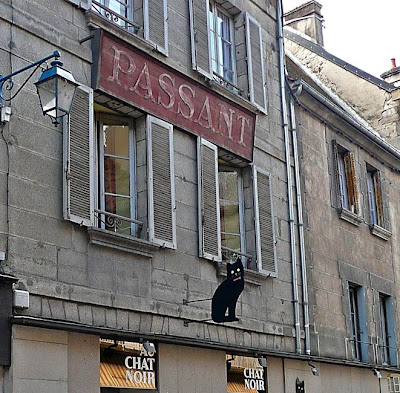 On the main street in Aubusson
Tourism is probably Aubusson's only prospect now. But the town is far from the main roads that crisscross France. You really have to want to go there. Aubusson is 90 km/55 miles from Limoges, and according to Google maps the drive takes and hour and forty-five minutes! That tells you what kinds of roads you'll be on, because there is essentially no traffic to slow you down, just curves and villages. From Tours or Saint-Aignan, it takes about three hours to get down there, and from Paris four to four and a half. 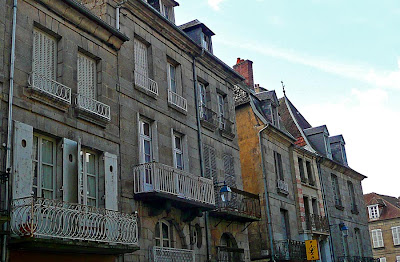 On main street in Aubusson, looking up
For Walt it me, it was a lunch stop. We had a pizza. One day we'll go back. I'd like to, anyway.
Posted by Ken Broadhurst at 09:32