Frost on October 15, 2009. It seems early this year. A French friend said a few weeks ago, when the weather was still very warm, almost hot, that winter would arrive all of a sudden. He was right. It stayed chilly all day yesterday, and we had a fire in the wood-burner again yesterday afternoon and evening.

Our new bread lady — la nouvelle porteuse de pain — who took over the route a few months ago, had this to say about our cold snap yesterday when she came by: « Ça ne durera pas ! » — "It won't last!" I hope she's right. 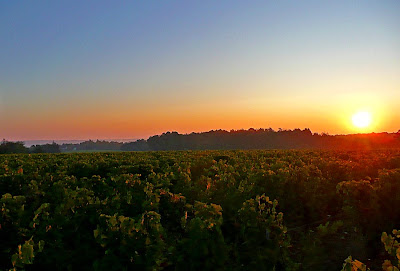 Yesterday's sunrise —
I can't tell if it looks as cold as it actually was.

We had a busy morning yesterday. While the weather was still too cold to go outside and work in, I made Sauce Meurette, a red wine sauce that's served with poached eggs, for lunch. It was something I could prepare in advance and then reheat when it came time to eat at noon. Then I made an apple cake, because we have so many apples and we didn't have any kind dessert in the house.

While the cake was baking, I went out and pulled up the last 15 tomato plants. I ended up with another bucketful of green tomatoes, plus a few ripe or almost-ripe one. Tomorrow, for lunch, it'll be fried green tomatoes. I don't think I've ever made those before. 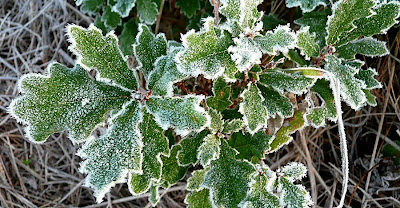 Frost on the leaves of a little oak tree...

Meanwhile, Walt went out and worked on the hedge some more. I know everybody must wonder why the hedge trimming is such a big deal. Well, for one thing, the hedge is at least 100 yards long. That's a lot of hedge. And it's wide, so you have to cut half the top surface from one side, and then the other half from the other side. And it's tall — 10 or even 12 feet in some places, and more than 7 feet high all around the yard.

Such a hedge is great for privacy, and it looks great — when it's trimmed. Letting it just grow is not an option. Sometimes, I admit, it seems like just ripping it out and replacing it with a wall or fence would be the best solution. But it would have to be a very high wall or privacy fence to serve the same purpose. 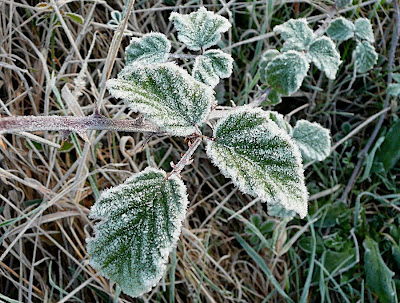 ...and frost on the leaves of blackberry vines

Trimming the hedge, then, means climbing up on a high ladder, working around all the obstacles in the way — trees and bushes, the wood shed, the garden shed, the barbecue grill, and more. And then there's the ditch. For about half the length of the hedge, on the outside of the yard, there's a deep drainage ditch. 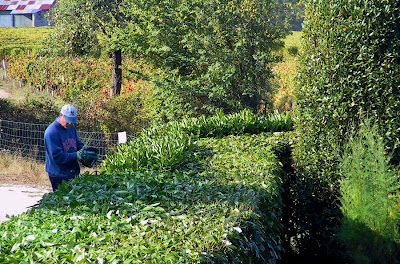 Walt up on the ladder, trimming the last remaining section of hedge

But guess what! It's done for another year! And all the clippings that need to be raked up have been raked up. It looks neat. This is one of our biggest garden challenges. Why don't we hire a professional to do it? Budget reasons, of course, in large part. We don't have a lot of money to throw around.

This is what it's like to have retired early and to be living through a time when the value of the U.S. dollar is so low against the euro. Besides, we don't work for a living otherwise. Doing jobs like this one, along with the cooking, home improvements, and gardening that we do, makes us feel productive and gives us a sense of accomplishment. If you just sit here day after day, you start to feel worthless — your self-esteem goes down. You get bored.

After Walt finished the hedge work and we ate lunch, he made another Tarte Tatin (an upside-down apple pie). We're taking it today as our contribution to lunch with friends, at their house down in Le Grand-Pressigny.

I've been thinking about how much longer we will continue to live this "lifestyle," and what the next phase of our lives will be like. This was our seventh summer in the country outside Saint-Aignan. All that is a subject for another day. Along with the recipes for the apple cake and the Meurette red-wine sauce.
Posted by Ken Broadhurst at 08:15