This past week has been an exercise in, and proof of, our integration into local life and French society. When somebody dies, are you part of the ritual, the commemoration, the funeral ceremonies? Or do you keep your distance, and live apart from your neighbors and other local people? Or do you participate, interact? 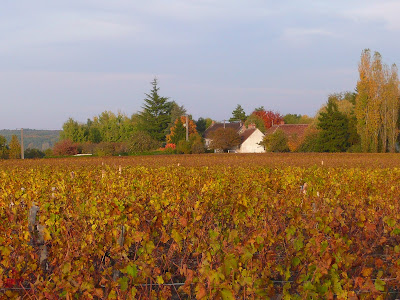 Fall color in the vineyards near Saint-Aignan-sur-Cher
It's ironic that a friend's passing turns into the first time you really feel a part of the life of the community, and not just your neighborhood. You go to a funeral and you recognize many of the attendees. You see and greet your plumber, the Peugeot dealer, your deceased friends father, the grape-grower/winery owner who has what is very likely the biggest business concern in the village... not to mention the mayor, who is your neighbor, to whom you say tu and not vous, and whom you greet with the famous cheek-kisses called les bises. 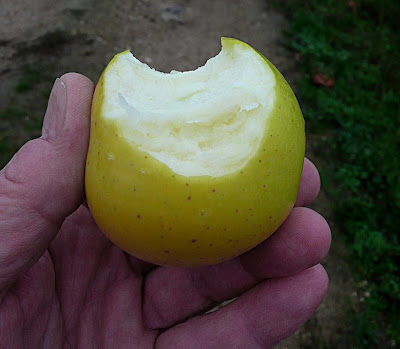 An apple a day, off the tree, has become
part of my morning routine
So much of it has to do with language. If you can't communicate with the people around you in their language, you remain an outsider. When you can communicate, you're still an outsider, but at least you have one foot in the other society. You can tell people about yourself, what brought you here, why you like the place, what you do with your days. They can start to get an idea of who you are.

Callie out in the vineyard on a very foggy morning
I've been thinking about why Jean-Luc's passing was so significant for me. We weren't the closest friends, but we did like each other. He had grown up in Paris, in the same neighborhoods I lived in, and at about the same time (30 to 35 years ago). When I first met Jean-Luc on July 14 — Bastille Day — in 2003, I thought to myself: "Okay, here's is the guy who is obviously a Parisian, and he lives here. If he can be happy living in Saint-Aignan, so can Walt and I."

He and our neighbors made us feel welcome here, at home. But he was somebody I could relate to even more than to my neighbors, who are all a generation older than I am. They have children and grandchildren, and they've never lived anywhere but here. Jean-Luc was a little younger than me, a little older than Walt, and he had lived many years in the urban environment that is the center of Paris. I'll miss that contact with the Paris of the 1970s and '80s.

The fact that Jean-Luc's companion, S., is an Englishwoman is also important. She has lived in this part of France for 20 years or more, speaks French well, and has a lot of friends here. But now she has to decide whether to stay in France or return to the U.K. "A lot of expats go home to die," she told me. "It's a well-known phenomenon." 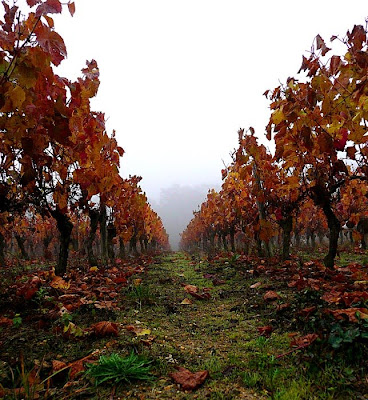 A dog's eye view of a fall walk in the Touraine vineyard
The other thing about Jean-Luc's death is that he died exactly the same way my father did, 20 years ago. He spent a perfectly normal day, though he felt tired and run down. He went to bed at his usual hour, and then he never woke up. That's a good way to go, I'm sure, but not when you are 53, like Jean-Luc, or 64, like my father. I guess I figure that's how I'll die, one day — but I don't know when.

Walt's father also died of a heart attack, and at age 44! There you have some of the reasons that convinced us to abandon the stresses of the working world, the California traffic jams, and big city life. We figured we might as well go ahead and do something we really wanted to do — move to France and live in the country — before it was too late.

This might sound morbid, but I came to France to die. To die, yes, « ...mais de mort lente », as the singer/poet Georges Brassens said in one of his songs. A slow death, enjoying each day that goes by before the last one comes.
Posted by Ken Broadhurst at 10:06