Our mornings have turned foggy and the days cloudier than before. October! Phooey. But it hasn't yet rained.

Yesterday morning Walt was out doing you-know-what (clipping the hedge, let me say immediately before other ideas pop into your head) when a gray VW mini-van drove up and parked near our back gate. A man got out and left the motor running. It was Bruno Denis. His winery, Domaine de la Renaudie, owns most of the vineyard that surrounds us on three sides. 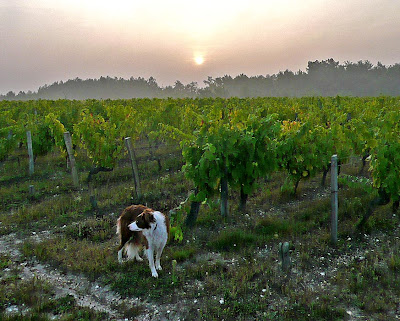 Sunrise in the vineyard day before yesterday
Walt said something about the weather, and Bruno answered that this has been, and still is, an exceptional year. He had come by to inspect some vineyard plots that were going to be harvested later in the day. 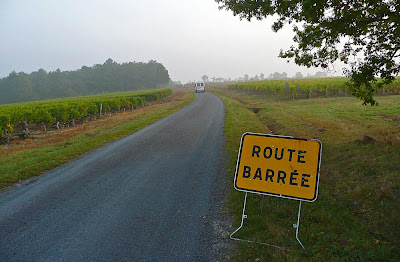 I hope the driver of this schoolbus knows what she's doing.
The sign says the road is closed up ahead.
I was busy doing my own version of you-know-what (raking up leaves, don't get excited) closer to the house. I asked Walt to ask Bruno about the variety of the blue grapes right outside our back gate. Just curious. I assumed they were one of the big three around here: Gamay, Cabernet Franc, or Côt/Malbec. 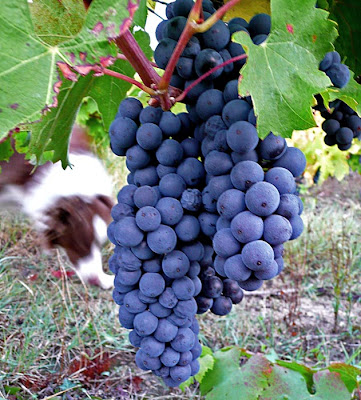 Blue grapes — I think they're Grolleau.
Well, I was wrong. Never assume. Bruno said those blue grapes are a cépage called Grolleau. It's not really a common varietal in France. Most of it is planted in the Loire Valley, but plantings of Grolleau have declined steeply over the past 50 years, from 25,000 down to 5,000 acres. Grolleau is often used to make rosé wines. 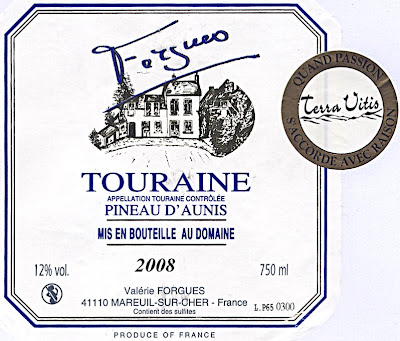 The label of another local winery that makes
rosé with Pineau d'Aunis grapes.
Just on the other side of the Grolleau parcel, there's a big parcel planted in Pineau d'Aunis, which is another grape used to make rosé wines. Those grapes are pink. They were harvested a week or so ago. 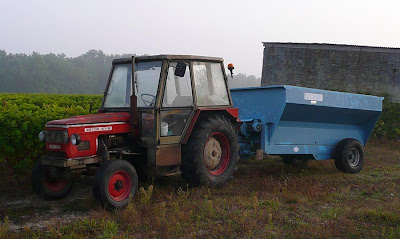 At the ready to receive a load of grapes
The grape harvest is winding down now. Most of the grapes are in. Some late-harvest varieties still hang on the vines. If the weather stays dry, they might hang there for a while yet. 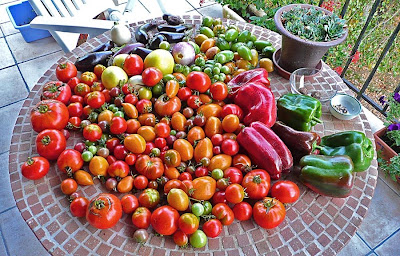 What was left in the vegetable garden
As for the vegetable garden, it's winding down now too, except for the green leafy things, which tolerate cold, even frost. Not that it's frosty yet — far from it. But it's coming. Yesterday morning we picked all the tomatoes we could find that were worth picking, and also the eggplants and red bell peppers. I pulled out the pepper plants and some of the eggplant plants. October. You know how I feel about that.
Posted by Ken Broadhurst at 07:19