You learn something every day. The Beaver asked yesterday, in a comment, what people call those little stumps of rock or concrete that you see up against the frames or posts of big doorways and gateways in France. Walt was sitting on one in Salers when I took his picture (here's a link to the photo that I posted yesterday). And here's a closer view, where you can see the object in question. Actually, Walt is sitting on one. 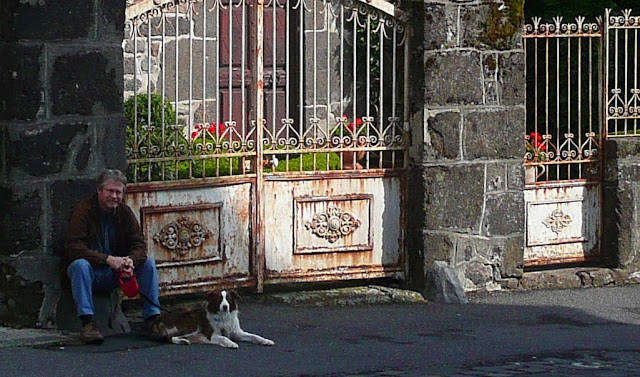 Sitting on a chasse-roue in Salers

I found several French sites that describe these things and show pictures of them. The object is called called « un chasse-roue » [shah-SROO] or « une bouteroue » [boo-TROO]. It was a Google image search on borne porte cochère that turned them up — porte cochère means "carriage entrance." These are architectural elements I've always seen in French towns and cities, but I never thought about a name for them. Here are some sites and blogs with details: 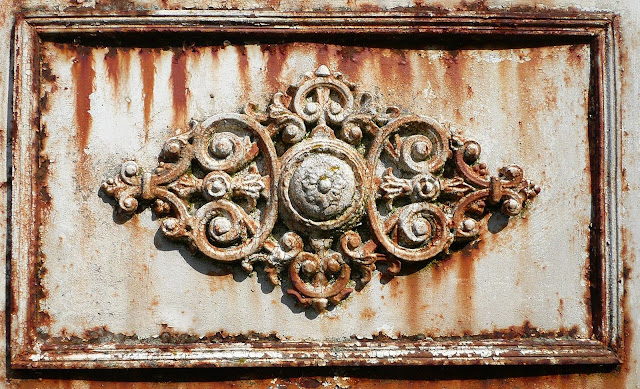 Detail of the gate decoration in Salers

The two terms are also in the Grand Larousse Electronique dictionary:

When the dictionary says « voitures », it doesn't mean modern automobiles. It means horse-drawn carts, wagons, or carriages. These chasse-roues (that's the plural form given in the Robert dictionary) are left over from earlier centuries, when « voitures » had large wooden or metal wheels. Hitting a chasse-roue wouldn't damage the vehicle and the chasse-roue would protect the wall or the door post. Nowadays, you can badly damage your car if you scrape a chasse-roue pulling into our out of a doorway or gateway, as The Beaver pointed out. 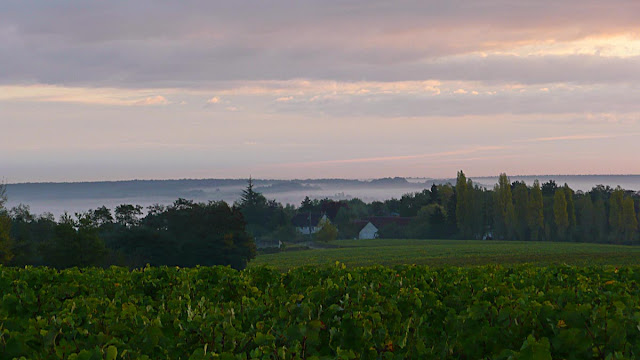 Two pictures I took this morning at sunrise —
fog in the river valley down the hill from our hamlet... 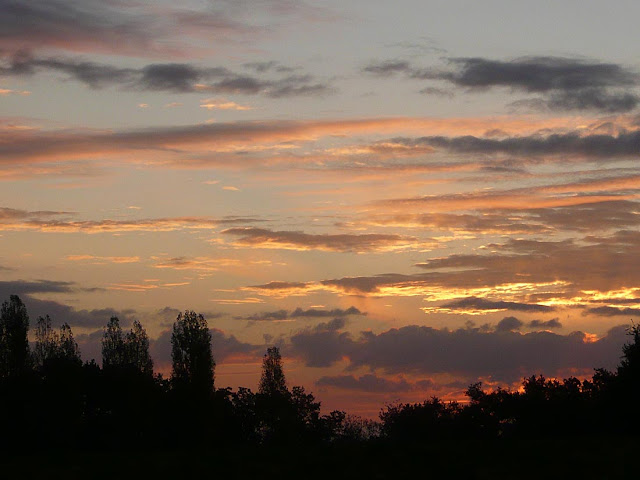 ...and the sunrise itself.
Click on the pictures to see them at full size. I posted them a little larger than usual.

In searching for pictures of bornes I also found a very interesting site called Martian Spoken Here. The word "Martian" is a bilingual pun on the French word « mauricien », and the subject of the blog is the French dialect spoken on the Ile Maurice — the island of Mauritius — in the Indian Ocean off the east coast of Africa. If you read French you will enjoy it.
Posted by Ken Broadhurst at 06:58