Good weather for a bad day

According to weather reports this morning, the weather is going to be bright and sunny in the Loire Valley all this week. If it turns out that way, it means we won't have to trudge to the cemetery from the village church tomorrow afternoon in the rain, under hoods or umbrellas.

After shopping at the market in Noyers yesterday — I bought a slice of pheasant pâté, a slice of duck pâté, some good bintje potatoes, and three nice cheeses — I went to one of the florist shops in Saint-Aignan to buy flowers for Jean-Luc's funeral. 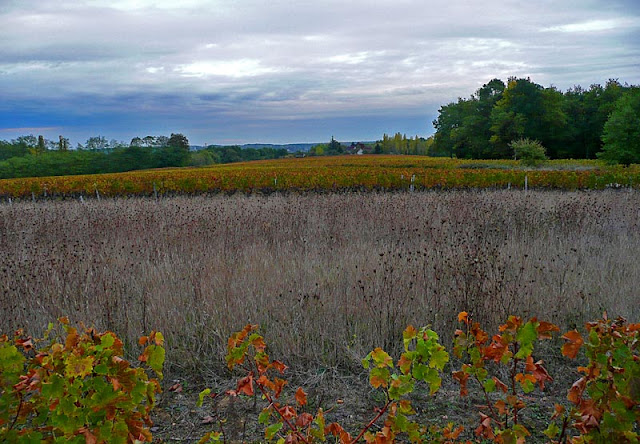 A view of the vineyard and our house from a few days ago,with storm clouds coming in from the northwest
Walt and I had discussed it and we weren't even sure that the florist's was the right place to go for funeral flowers. Maybe we should go directly to the pompes funèbres, the funeral home for them. I figured the woman at the florist shop, who is an old friend of the woman we bought our house from, would be able to tell me.

No, I wasn't in the wrong place, the young woman who waited on me said. "What kind of flowers to you want to send?" she asked me. I told her I had no idea, that this was my first experience of French funeral. Okay, she said, and led me outside to look at potted chrysanthemums out on the pavement in front of the shop.

"Are these what people buy?" I wanted to know. "Yes," she said, "here's the selection. Decide how much you want to spend and pick out the ones you like." They started at 7 euros and went up to 17. That certainly wasn't going to break the bank, even with the crummy dollar.

"You can also get cut flowers," the woman said, "but they won't last as long at the cemetery. Most people buy potted plants — le plus souvent des chrysanthèmes." I picked out a big planter box full of them, with a profusion of purple flowers. I paid 17 euros, the highest price.

I had told the woman it was for Jean-Luc's funeral, and she just nodded. Back in the shop, she gave me a card to fill out. "Write your message and your name on this side," she said. "And then on the back, where it says name and telephone number, just put.... well, his companion S.'s name, and then Famille M..., Jean-Luc's last name." J-L and S. were well known in Saint-Aignan, obviously. They restored a house on the main square in 2008.

She said the flowers would be delivered to the funeral home, which in turn would deliver them to the church for the service and then to the cemetery for the burial. She told me at least three times that I should go to the church, not the cemetery, at 2:30 Tuesday afternoon — I already knew that. 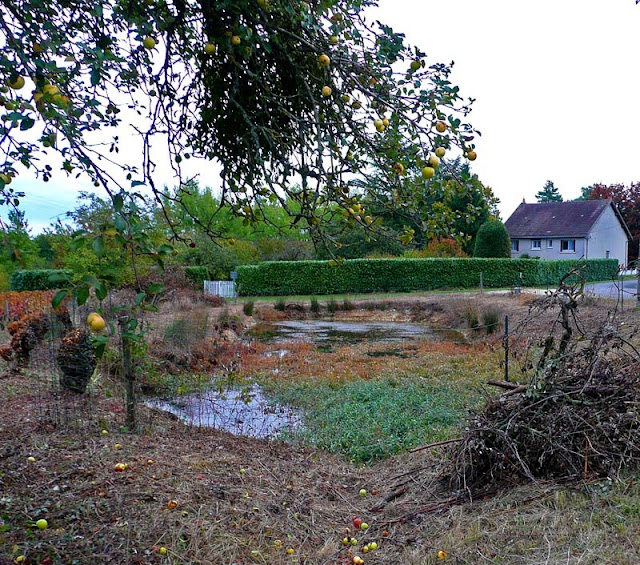 Look how they cleaned up the banks of the village pond
out behind our house. Now they need to pull that
invasive aquatic plant out of it. I hope the fish
survive because they eat mosquito larvae.

Yesterday evening I mentioned to S. that I wasn't sure if everybody or just family actually went to the cemetery for the burial after the church service. She said yes, I want everybody who wants to be there to be there with us. So that settled that. It will all take place tomorrow.

One thing that has become clear is that food doesn't play the same role at a time like this in France as it does in America. S. said it doesn't happen that way in England either. I wonder where we Americans got the custom of taking a covered dish, a casserole, a pie, or a cake to the bereaved family.

Walt and I were the only ones who took food to S., as far as I could tell. Yesterday we went over there for a couple of hours late in the afternoon rather than having them come here. It made more sense, and I'm glad we did it that way because several other friends stopped in while we were there. Jean-Luc's two sisters came over too, from their father's house across the street.

I made a Pounti cake, the Auvergne specialty. Here's the recipe and a description. Everybody said it was really good, and I thought so too. The recipe is a keeper.
Posted by Ken Broadhurst at 09:06