Where are all the people in these Auvergne villages? That's the question that Melinda asked in a comment yesterday. It's true that the villages we visited were not crowded. We weren't there in tourist season, but just after it ended. And it was rainy, which doesn't encourage people to go out unless they absolutely have to.

It's not just in the Auvergne where you drive into French villages that look completely deserted, though. The same thing happens in the Loire Valley. I remember the day we drove back to Saint-Aignan from Paris. It was August 31. We drove across the Loire at Beaugency and headed into the Sologne forest, on our way to Chambord. 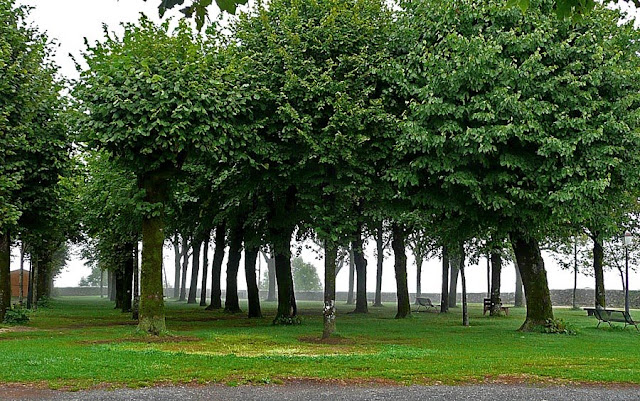 A park in Salers on a foggy Wednesday morning in
September — where is everybody?

The villages looked shuttered and empty of life. Maybe it's because not a lot of houses have front yards, or front porches. Especially in the towns and villages. So you don't see people, and you don't know if they are in a hidden courtyard somewhere, inside their houses, or just not there at all. Where is everybody?

One thing that really gives you the impression that the villages are deserted is the closed shutters. In villages and towns, the streets are often very narrow. If your house has windows on the street side, especially on the ground floor, you probably keep the shutters closed a lot of the time. Otherwise, people walking by can look into your rooms, and cars driving by can be loud and stinky. Pollution dirties you windows. 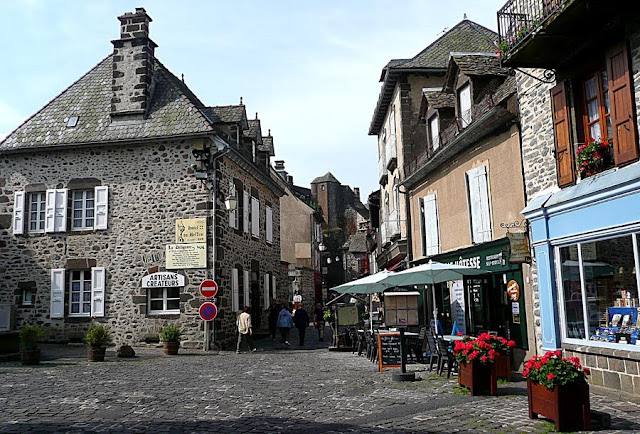 As lunchtime approached and the sun broke through the fog,
people started appearing in the streets of Salers.

So you keep your shutters closed on the street side and live on the courtyard or back yard side of the building. But it's also true that a lot of the villages are underpopulated these days. In other words, a lot of the houses are occupied only seasonally, by people who live and work in cities but enjoy spending vacations in the country. The shutters on those houses are nearly always closed.

The time of day and the weather also have a lot to do with making a village look deserted. When it's lunchtime, all activity stops. Unless you happen upon a café or restaurant with outdoor seating, you don't see anybody. People are inside, eating. Most are eating at home. In France, people still eat their meals on a schedule, and they sit around a table — unlike what happens so much in America. Here, lunch is at noon, or at 1:00. Not at 3:00 or 4:00. Dinner, a light meal, is at 8:00, more or less. Not at 5:00. 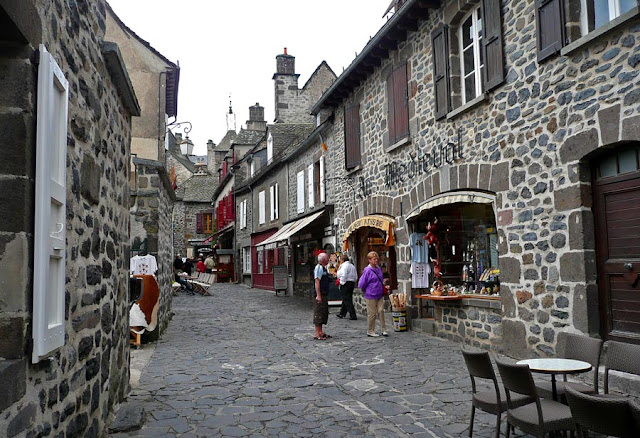 Still, you couldn't say the streets were bustling.

One clue to look for is windowboxes full of flowers. If there are flowers, there is somebody there to water them. The building is not abandoned, even if the shutters are all closed up.

I remember once going to visit the little town of Noyon (pop. 15,000), north of Paris and near Laon and Soissons, with a couple of American friends. I believe it was a Saturday in September 1994, and the weather was nice. (It hard to believe it was 15 years ago.) We drove into the town at noontime, maybe 1:00 or close to 2:00, thinking we would have a picnic somewhere and see the town's fine cathedral. We had packed a lunch.

And yes, the church in Noyon is a cathedral, which is surprising. Most churches are not cathedrals, but a lot of Americans don't realize that. I hear the term misused all the time, or read it on travel forums about France. A cathedral is a church presided over by a bishop. It's the seat of a bishopric. Saint-Aignan doesn't have a cathedral. Blois does. Tours does. 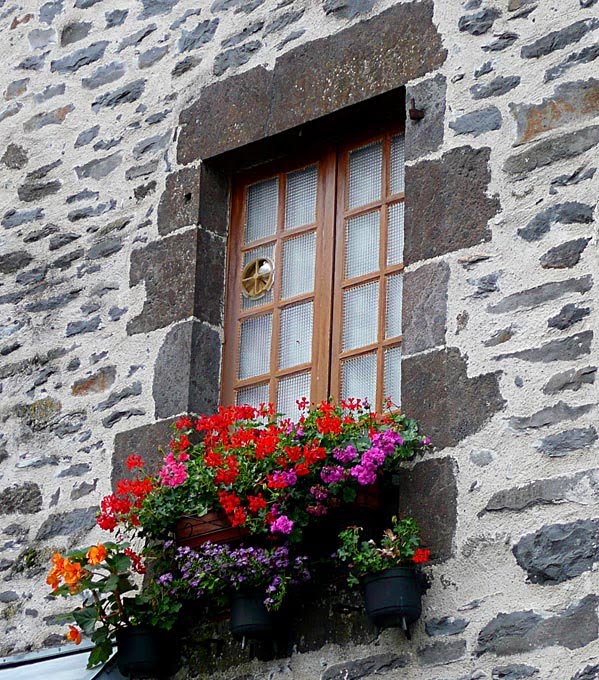 Windowboxes full of flowers are a clue.

Cathedrals are usually in big cities. That's why it's surprising that Noyon has a cathedral — it's a small town. But Charlemagne was crowned King of the Francs there, in 768 — more than 1,200 years ago.

When we got to Noyon, our friends looked around and asked: "Is this a ghost town? It's completely deserted." When they said that, I realized that the streets did seem almost spookily empty. There were cars parked around, not not a cat was to be seen. That's a French expression: « Il n'y avait pas un chat. » It means there's nobody around. I thought about it and told them: "It's because it's lunchtime." I don't think they believed me.

By the way, these American friends had rented an apartment on the top floor of a building right off the Place Monge in Paris. They said they thought the building was basically abandoned. They never saw or heard another person the whole week they stayed there. Walt and I walked up the apartment at least once, and on every floor there were doors with doorbells labeled with last names. People definitely lived there. They were just very quiet and very discreet, not wanting to disturb each other. And during the day they were probably at work, having left early and getting home fairly late in the evening. It was a nice building, and typically Parisian. 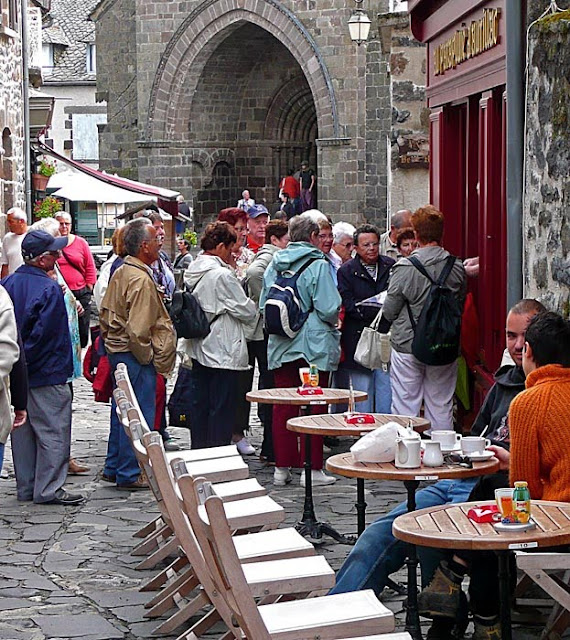 In Salers, a tour bus had apparently come in. We tried
to avoid getting tangled up in this crowd, and
I didn't want them in too many of my pictures.

But back to Noyon — that September day, we went into the cathedral and looked around. We found a bench on the church grounds where we could eat the picnic lunch we had brought with us. It was getting to be 4:00 p.m. or so by the time we went back to the car to continue on to Laon, where there is a more famous cathedral to see.

In Noyon at four o'clock, the streets were suddenly crowded with people. Couples strolled arm in arm down the town's main pedestrian street. Some pushed strollers or baby carriages. Children played and rode bicycles. There was an atmosphere of merriment. Shops were open for business.

The contrast with the scene of desertion that had greeted us a couple of hours earlier was astonishing. Lunch had been eaten. It was time to go out for a walk and enjoy the nice sunny weather. In September, you never know if you'll have another sunny weekend day before springtime. 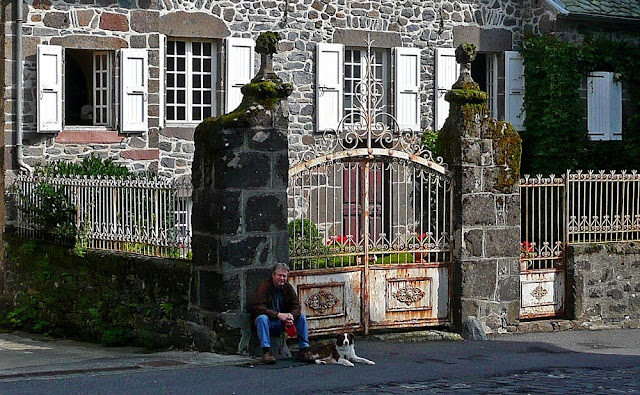 There is always one suspicious-looking character
lurking down a side street.

So take all that into consideration when you drive into a French town or village that seems eerily quiet and empty. Maybe it's just not the right time of day, or the right day of the week. If it's a Monday, most towns will be quiet. Many have a market once a week, and on that day you will see people out and about. But most days the place will be quiet.

When we drove into the Loire Valley on August 31, it was surprising to us to see whole villages where there was not a soul in sight. You can't help but wonder if anybody really lives in them. But we were out early in the afternoon. People were probably finishing their lunch, but another factor was surely at play. It was really hot. I mean the sun was beating down and the temperature must have been in the 80s. 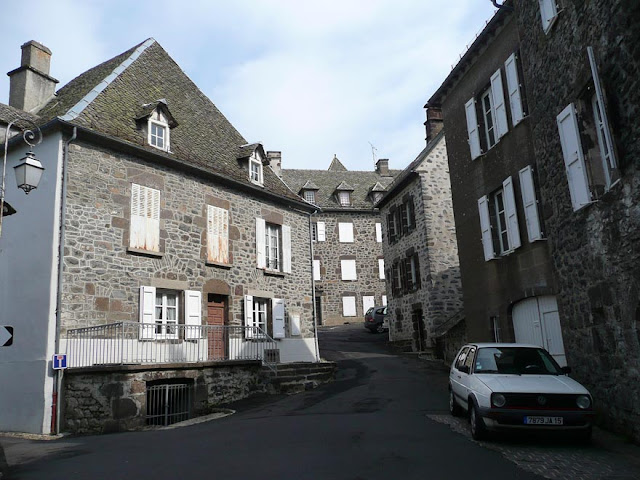 So all the people were indoors, digesting and maybe napping during the heat of the day. And one way you keep your house cool is to close the shutters to block out the hot sun. It was also a Monday. That's the real day of rest in France, after the shopping on Saturday, and on Sunday morning, and the cooking and eating of Sunday dinner. The shops are mostly closed on Mondays. People who work all weekend take the day off, and rest up.

One more thing about my pictures — I try to avoid taking pictures of people. And sometimes if there are people in the pictures that I don't want you to see, I just take them out using Photoshop.
Posted by Ken Broadhurst at 07:20