Ever slept on a traversin ?

If you've ever been to France and slept in a hotel, you've probably seen and even slept on a traversin. Did you know what you were sleeping on?

In France, the traversin is a standard bed accessory. I just read on English-language Wikipedia that it is also very common in countries including China, Indonesia, Malaysia, Singapore, Thailand, the Philippines, and Japan. It's not so common in America.

But we have several names for the traversin in American English. First of all, let me say that a traversin is a kind of bed pillow ... sort of. Here's a translation from French-language Wikipedia: "The traversin is sometimes considered to be a pillow. It is the same width as the bed (and is generally tubular in shape)." You could also call it a cushion. 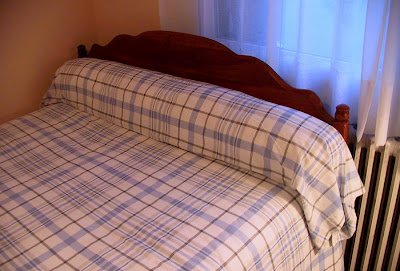 We bought a traversin and a special pillow case for it.
Why is the traversin "sometimes" considered to be a pillow? I think it's because you use the traversin as a pillow for your pillow. In other words, while you can sleep with your head directly on the traversin if you want to, many prefer to use it a support for another kind of pillow — you rest your head on a pillow with the traversin underneath.

Like other pillows, in France the traversin has a specially made pillow case to protect it and keep it clean. The cases are easy to find. The traversin is actually one of three kinds of bed pillows you often see in France: rectangular pillows like most American pillows; square pillows that I think we call "European pillows" in the U.S.; and the cylindrical (or "tubular") traversin.

In French, another word for the traversin is « polochon ». I have to admit that I just learned that from reading French Wiki's article on the subject. The Robert dictionary, which is the standard in France, says polochon is a "familiar" term, compared to the more technically correct traversin. Another term used to describe it is « boudin », which means "sausage" — and it is certainly sausage-shaped.

This is a "bolster" in American English.
In English, the technical term for travesin is "bolster" or "bolster pillow." I just read an article in which the author used the verb "to bolster" — to prop up, support — and realized that the bolster pillow actually bolsters your other pillow. In some countries, the bolster is called a "hugging pillow." And it's also known as a "body pillow" because you can hug it while you sleep and it will pillow your whole body. One source called it a "hot-dog pillow."

I'm writing about this because Walt and I just bought a traversin for the bed in our guest room. We've never had one before. This is part of our integration into French society, I guess. We have a bidet in the bathroom, but no toilet in there — it's in a separate room called the W.C. Now we have a traversin in the guest bedroom.

Pretty soon we'll be wearing berets and walking around carrying baguettes tucked under our arms.
Posted by Ken Broadhurst at 08:55