A sunrise, and a shopping expedition

Yesterday was a strange weather day. It was warm in the morning, and almost hot in the afternoon. Our thermometer registered 26C — that's nearly 80F. That might be a record high for an October 7. It wasn't especially sunny either.

And then in the evening we had a thunderstorm. The wind blew hard for a while — it had been gusty most of the afternoon — and there was brief but heavy rain. There was enough close-by lightning that we unplugged our router and DSL modem, and turned off our computers. Then we sat out on the front terrace and watched the storm blow through. With the wind and blowing rain, we started to get wet, so we had to go back inside. 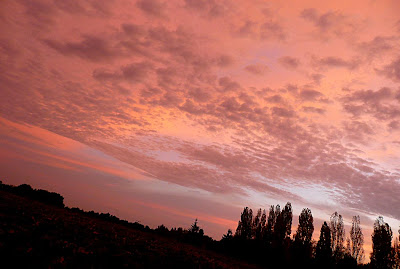 Yesterday at 7:54 a.m., when the light was at its pinkest
Earlier in the day, at sunrise, I was out walking Callie. When I first went out, just before 8:00 a.m., the light was really pink, giving everything a surreal glow. As the dog and I walked out around the edge of the vineyard, I kept watching the sky change colors. And I of course was taking pictures. 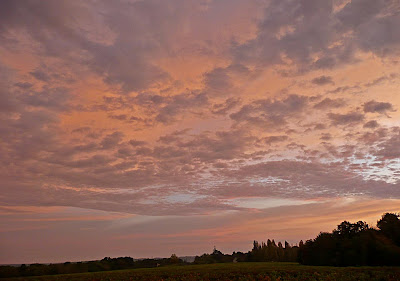 7:58 — looking northeast, back toward our house
I had told Walt the morning walk would be a short one, because we planned to drive up to Blois before lunch, and we wanted to get an early start. We were curious to go to the new Auchan hypermarket (superstore) in the suburbs south of Blois. And we wanted to go up to the Asian-products superstore called Paris-Store on the north side of town to get some sauces and noodles for cooking Chinese, Vietnamese, and Thai dishes.

Auchan was basically a bust. The store has a big computer and electronics section, but we didn't need anything like that. We found a traversin, a long bolster pillow that we wanted for the guestroom bed, and we got it at half the price we would have paid in Saint-Aignan. But that was about it. 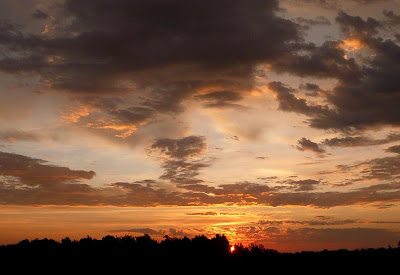 8:06 — the sun peeks out from behind the trees
We looked around in Auchan's food section, but I immediately saw that the prices were higher than in our local SuperU and Intermarché stores. It's not worth it to drive all the way up to Blois just to pay higher prices for the same merchandise. So we won't be tempted to go again unless there's some specific item we need, or we just feel like getting out of the house and taking a drive. 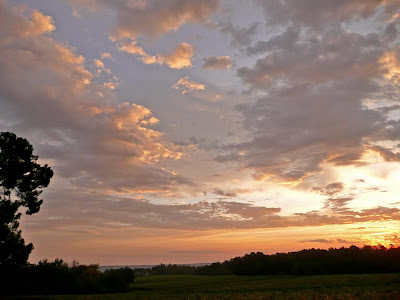 8:07, at the farthest point from our house on this day's walk
Paris-Store was not disappointing, however. We drove through the middle of Blois (pop. 70,000 or so), which is what passes for a city in our département (le Loir-et-Cher). It has neighborhoods that are so typical of a provincial city, and it's always interesting to sight-see along the way. We really are certified country bumpkins nowadays.

At Paris-Store we found most of what we were looking for — products like sesame oil and oyster sauce that we can't get in Saint-Aignan. Then I asked the man who runs the store if he had tofu in tins. We've bought it that way at Asian supermarkets in Paris, and it's handy because we can't buy fresh tofu here in Saint-Aignan. The canned tofu is not as good as fresh, but it's not bad and better than none at all. It turned out that Paris-Store was out of stock for now. Maybe next time. 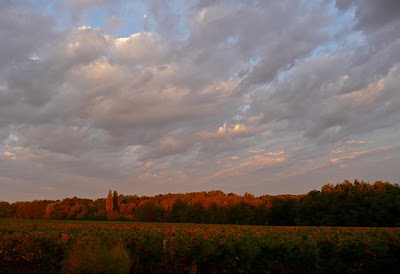 8:18 — arriving at home, out by our back gate
Be that as it may, the October 7 sunrise was one of the best in a long time. It's so nice to be out in the vineyard all alone — well, with Callie and, in the distance, a guy on a grape-harvesting machine bringing in another few loads of ripe grapes — early in the morning in nice weather. I don't get tired of it, even though I've been taking walks out there nearly every day for 6 years now. And Callie would be a very unhappy puppy if we didn't go every day. It's probably her greatest pleasure in life.
Posted by Ken Broadhurst at 07:20