It was quite a day but I'm not ready to write about it yet. There were about 150 people at the funeral. I knew maybe 20 of them, and I recognized a lot more whose paths I've crossed over the last six years.

After the service and the burial, we were invited over to Jean-Luc's father's house for a glass of wine and some finger food. It was a nice gathering even though again, I didn't know a lot of the people in attendance. I talked with J-L's sisters, who were getting ready to drive back to Paris. They both have professional responsibilities. 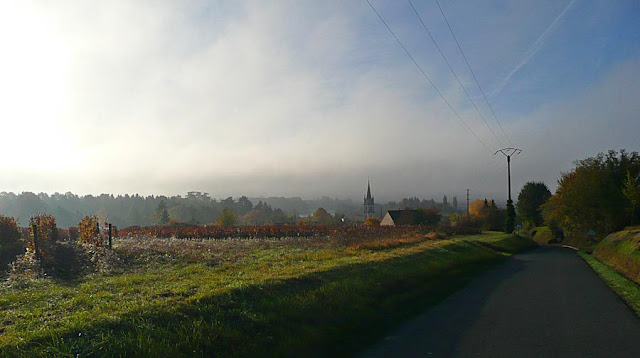 Driving back to Saint-Aignan on an October morning,
just as the fog is starting to lift

I also spent a while talking with a man who was standing alone, kind of off to the side, as I was after a minute or two. He told me he was a childhood friend of Jean-Luc's, in Paris. He still lives in Paris. I asked if he had been to our village before, and he said yes, his grandfather was born here and lived here. It was his father who re-located to Paris as a young man, but when the grandfather here died the family kept his house.

So he spent summers in the Saint-Aignan area just as Jean-Luc did. He had driven down for the day, and I'm glad I started up a conversation with him because he had made all that effort to be here and was just standing there looking a little out of place. He made interesting conversation, so it wasn't a case of his being shy or naturally tactiturn. I think he just didn't know anybody. But he wanted to be there for his old friend's funeral.

It was a beautiful day and a beautiful service. There were many, many wreaths and sprays and pots of flowers. There were quite a few English people there, and at least one American and one German, but mostly the people were the village locals. Les paysans du coin. 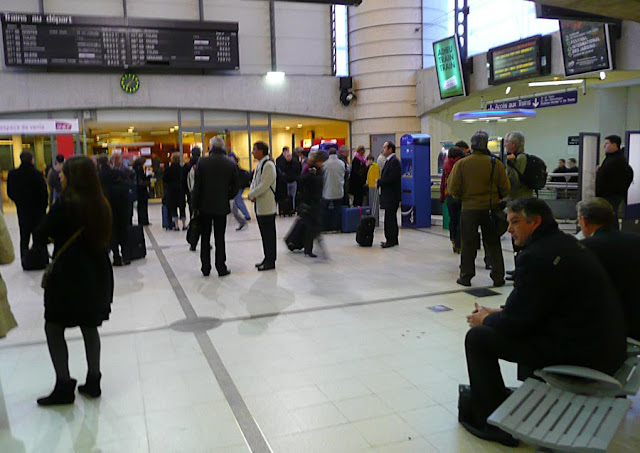 Commuters in Tours waiting for the 7:45 train to Paris.
The picture is blurry, but then it was a blurry morning.

The atmosphere and the people were so different from what I had seen earlier in the morning at the TGV station over in Tours. Those were, as Walt described them, the "people dressed in black" — the urban ones who commute to Paris on the 7:45 a.m. TGV to Montparnasse. You'd think they were the ones who were all going to a funeral, in their black clothes, shoes, and coats. But no, they were just going to work in the city.