Now that I've cooked this and looked at the pictures, I realize it looks like an American breakfast. I mean the kind of breakfast you might make if you were out in the woods on a camping trip and cooking over a campfire. And you know everything tastes better outdoors.

That's what the Auvergne is like, I guess. It's high mountains and deep valleys. When you're there, you feel like you might be out camping somewhere, even if you are staying in a very big, nicely furnished house. It's something about the weather. Or the smell of the fresh air. The dampness. All those cows, maybe. 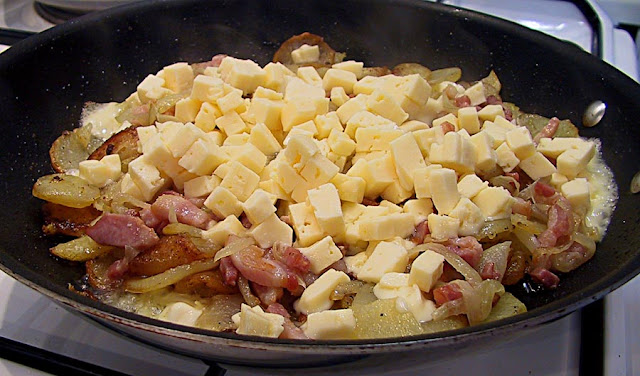 Potatoes, bacon, onions, and diced cheese in a pan

So yesterday I cooked truffade again. I think it's only the second time, or maybe the third, in the month since we got back from our brief trip to Saint-Chamant and the Pays de Salers. Blame SuperU: the store has had potatoes on sale for a month now.

They're nice spuds of the Agata variety, which make good fried or sauteed potatoes, and the first bag I bought was only 1.75 € for 5 kg (11 lbs). When we had gone through that bag, I went back to SuperU for something else and noticed that they had the same potatoes, same quantity, on sale for 1.00 €. I can't resist prices like that — at least not when we're talking about an excellent fresh product. 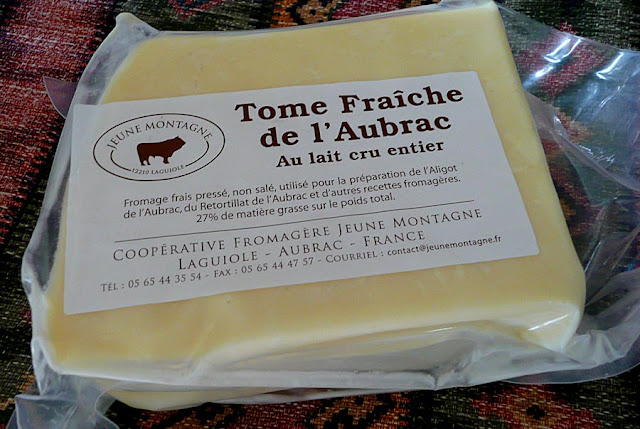 Here's another picture of the tome fraîche cheese.

I published the French recipe for La Truffade a couple of days ago — here's a link to it. The essential ingredients are thinly sliced potatoes; a good melting cheese, like Tome fraîche from Auvergne; bacon (smoked pork lardons); salt and pepper. Optional ingredients are onions and garlic. Here's how I ended up translating (adapting, really) the recipe:

In a large non-stick skillet, cook the bacon with a little bit of butter or vegetable oil until browned. If you're using onions or garlic, saute with the bacon. Remove from pan, leaving the fat, and set aside.

Cut the potatoes into thin slices and put them in the skillet with a little more butter or oil as necessary. Let them brown a little on the bottom and then cover them for a few minutes until they cook through.

Grate the cheese or cut it into little pieces. Add cheese and the cooked bacon lardons to the pan and toss or stir the potatoes around. Cover the pan again so that the cheese will melt. Let the potatoes brown on the bottom. Then turn the contents of the pan out onto a serving platter.

Serve with bread, red wine, and a green salad. 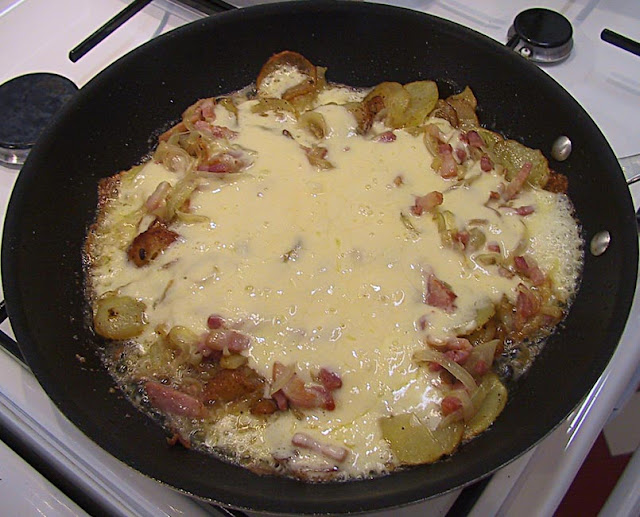 The cheese melts right into the sauteed potatoes.

Adding onion to the truffade is unconventional — but it sure is good. The famous French chef Joël Rebuchon, who specializes in potato dishes, has published a recipe for truffade in which he cooks the potatoes with garlic. I even found one recipe that includes diced tomatoes in the mixture!

I think Jack cheese or young white Cheddar would be good cheeses to make the truffade with. Instead of bacon, you could use little chunks of ham, or even chicken or turkey (especially smoked varieties). The amount of salt you need depends on the saltiness of the cheese and meat you use. Don't forget pepper. 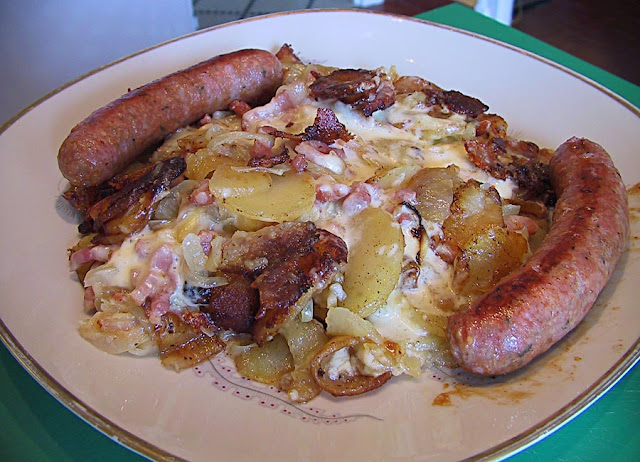 La Truffade. Can't decide which picture I like better...

We ate sausages with our truffade yesterday. That was a little rich, probably, but then we are doing a lot of work outside right now. When Bill from NH was hear a few weeks ago, we had truffade with a stuffed tomato for lunch, and that was a good combination. Fried eggs would certainly be good alongside. 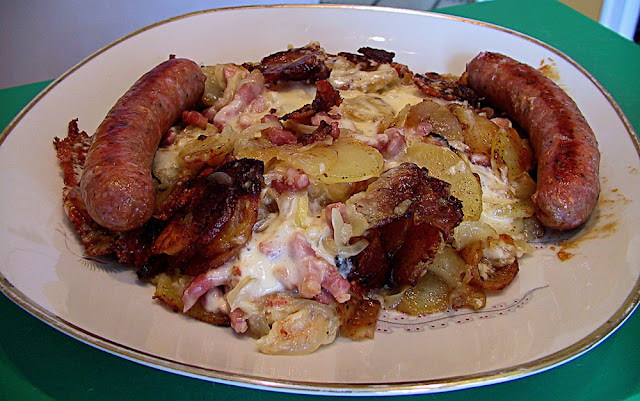 ...so I'm including them both.

I guess Idaho russet potatoes would be the best U.S. variety for truffade, but I'd also have to try it with Yukon Golds or new red potatoes if I were making it over there.

Have truffade for breakfast if you want, but substitute coffee for the red wine. Then sit around the campfire and enjoy it. Don't forget to chop some wood or go on a long hike afterwards to burn off the calories.
Posted by Ken Broadhurst at 06:38