The dark church at Tournemire

Of course every village has its church. In fact, that's the definition of the term village in French: a place with a church and some houses. If it doesn't have a church, it's not a un village but a un hameau, a hamlet, like the one we live in near Saint-Aignan.

Tournemire is a village with both a church and a château. It's in the Cantal département, which is in the Auvergne région, which is in turn part of the French geographical zone called Le Massif Central — the central highlands. 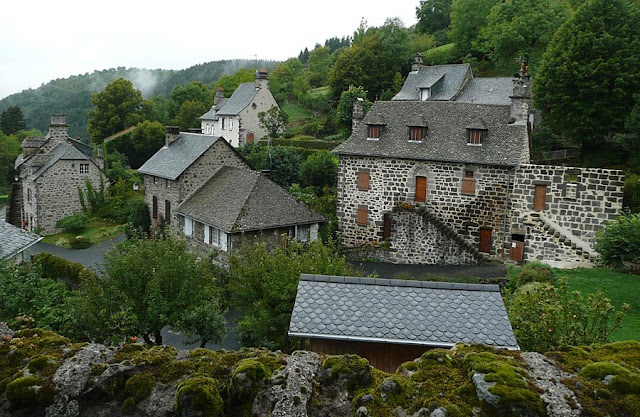 When we got to Tournemire, on little winding roads with steep drop-offs, the rain let up for a few minutes. We all had raincoats or umbrellas, and there was no wind to speak of, so we decided to park on the edge of the village — at one end, actually — and walk through the main street over to the château, which we had seen from above. The sky cooperated. 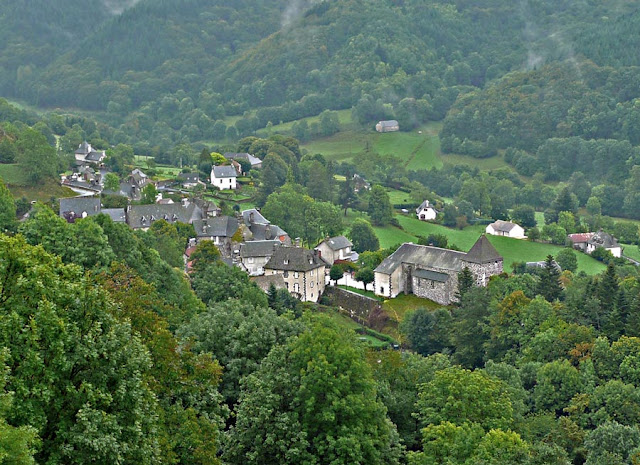 The village from above. That's the church on the right.

The village seemed pretty much deserted. It was early September, and a Wednesday. And it had been raining for a day or two, after all. There were maybe two or three other cars in the parking lot near the tourist office, along with our two. One of the first places we saw on our walk was the Auberge de Tournemire, the Tournemire Inn, which operates a crêperie/restaurant. 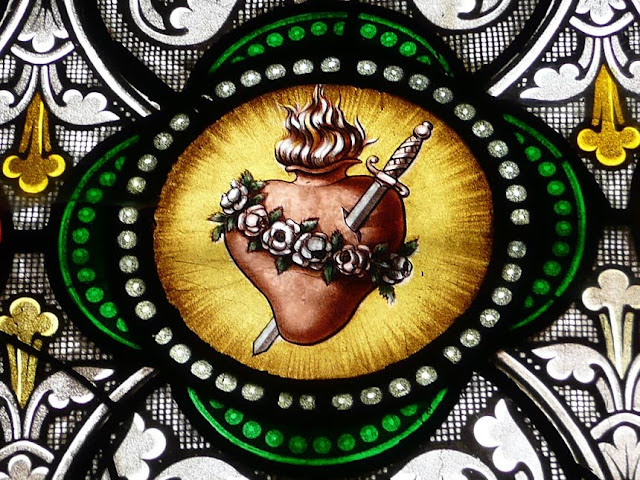 A heart with a dagger through it, no?

That sounded like a good place to have lunch after our walk. I stopped in and made a reservation for five at 12:15. No problem. We looked at the menu. One of the house specialties was the regional specialty called La Truffade (here's my topic about this potato dish). It was served with a salad as a light lunch, or with meat or sausages and salad for something a little more substantial. There were crêpes, but just for dessert. 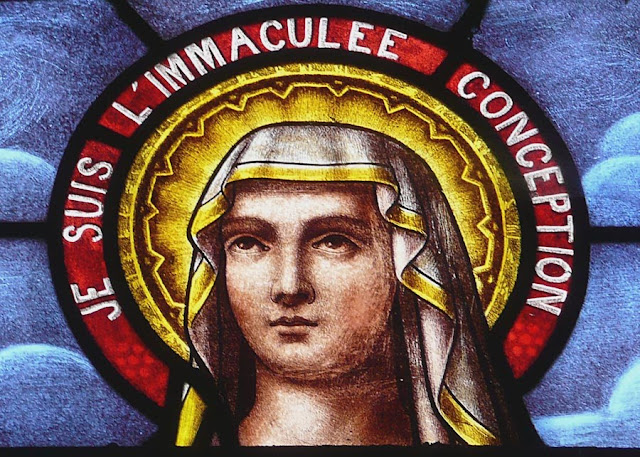 "I am the Immaculate Conception."

The village was so picturesque you might have thought you were on a movie set or in a theme park. But the houses are massive, stone constructions, built out of the local black lava — this is in the middle of the Parc des Volcans d'Auvergne, after all. The village has to be a thousand years old, or older.

We didn't see any more dining establishments as we walked through the main street, so we were glad we had made a reservation for lunch when we did. We were headed out into the volcano park, and I doubted we would find any other place to eat. There was one café in Tournemire, with a sign and a couple of tables out on the sidewalk, and with a beautiful view out over the valley down below. But it seemed to be shut up tight. 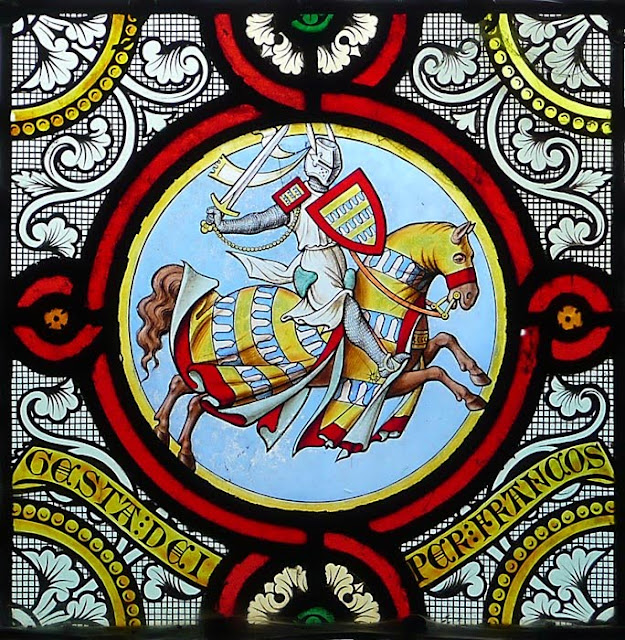 We liked this stained-glass knight.

Soon we came to the church. The door was wide open, so we went it. It was very dark inside, being built, like the houses, of that black lava stone. And remember, the light was gray and dim outside that day too.

The interior seemed very primitive; that was probably the darkness, which gave you the impression that there were probably spider webs and dust balls in all the corners. Who knew what was hiding in there. The chairs that took the place of pews were not arranged in straight rows. They were kind of a jumble, as if people had left in a hurry. On the positive side, I guess that means the church is used. 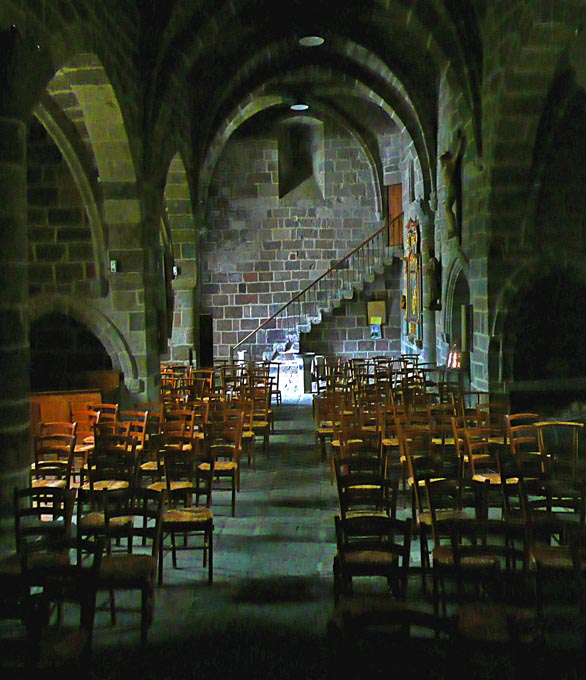 L'Eglise de Tournemire en Auvergne
(I had to lighten up the picture in Photoshop.)

According to a book I read, one of the treasures of the church in Tournemire is a thorn from Christ's crown of thorns, brought back from the Holy Land by a crusader in the Middle Ages. We didn't see it, but that's not surprising. It was too dark in there.

At the end of our little tour I found Jesus. Oh, that doesn't sound right. I mean I peered into a corner and noticed a figure reclining in a low cranny, near the floor, in darkness. It was a representation of Christ in his tomb. I used my flash to snap a picture.
Posted by Ken Broadhurst at 08:08