Okay, two requests for more information about pork chops in a mustardy cream sauce. Well, information about the sauce, anyway. Such a sauce is good with chicken, veal, or steak too. And it's nothing if not simple. This is a classic French recipe and I remember learning how to make it back in the late 1970s.

First, a word about pork chops. I don't know how you cook them. Too often, in American, pork chops are cooked dry. Just throw them in the pan and fry them. When they're browned, they're done. Wrong! What you do is brown the chops — with some onions, for example — and when they are done you add about ½ cup of water or, better, white wine, to the pan. Cover it and continue cooking the chops on low heat on top of the stove, or in a 325ºF oven, for 10 to 15 minutes. Then they're ready. 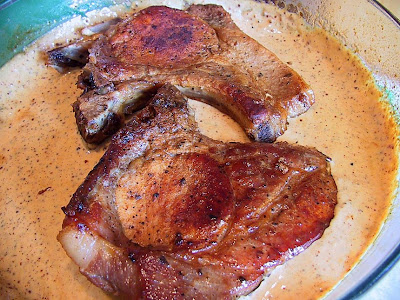 Pork chops in a creamy mustard sauce
To make the mustardy cream sauce — should that be a creamy mustard sauce? — take the pork chops out of the pan and set them aside in a warm place (a warm oven, say). Into the pan, with the juice left there from braising the chops and onions, add, oh, half a cup of cream. Or more, depending on how many chops you're making. French crême fraîche is best, but whipping or heavy U.S. cream is okay too.

Stir the cream until it is hot and starting to bubble. Salt and pepper it. And then stir in 2 or 3 tablespoons of Dijon mustard. Experiment and taste to get the amount you like. It doesn't have to be a very spicy-hot mustard, because as soon as you heat mustard up the spicy hotness goes out of it. The last time I made this sauce I used grainy old-fashioned French mustard — called moutarde à l'ancienne or moutarde de Meaux (a town east of Paris). The little bits of mustard seed give the sauce a nice look. 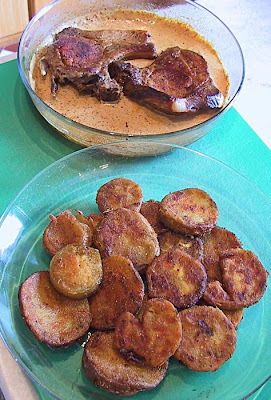 Pork chops in mustard-cream sauce,
served with fried green tomatoes
Put the pork chops (or chicken, or steak) back in the pan when the sauce is blended and hot. Turn them over in it. Then serve them. Put the sauce in a bowl or gravy boat and serve it alongside. It'll be good on potatoes or other vegetables, such as fried green tomatoes or green beans or mashed potatoes. And it's good when you sop it up with a piece of French bread too.

Here's a similar recipe for pork chops from a French cookbook, but with tomato sauce:

Put four pork chops in a pan to brown without adding any fat. Add one finely diced onion and let it start to cook down. Add to the pan half a cup of tomato paste thinned with two tablespoons of water. Season with salt, pepper, and a pinch of dried thyme. Cover the pan and let it cook for 10 minutes on low heat.

So often, the simplest foods are the best.
Posted by Ken Broadhurst at 07:14