Pounti, a savory cake from Auvergne

The food of the Auvergne is rustic and filling. It's the kind of food people living in a chilly climate need, especially when their life requires spending a lot of time outdoors. Cabbage, potatoes, cheese, bread, and cured pork products — hams and sausages — are staples. Soupe aux choux, cabbage soup, in various forms, has always sustained the local people.

One specialty I didn't know about when we went to spend a few days in the Cantal department was Pounti, a savory cake made with local country-style ham, the smoked pork chunks called lardons, Swiss chard, prunes (dried plums, that is), and cheese. I saw Pounti in the market in Salers and in food shops, but I wasn't sure what it was. 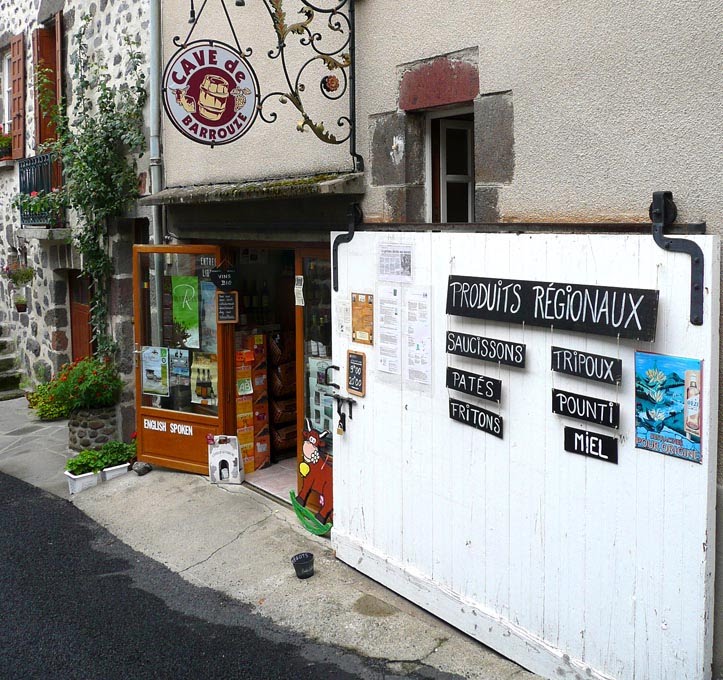 A shop in Salers selling regional specalties —
sausages, pâtés, honey, and Pounti, among others

Then back in Saint-Aignan I was looking through a recent edition of a French cooking magazine (thanks to Peter Hertzmann) and came across this recipe for Pounti. I made it a couple of days later. By the way, I haven't found any information about the origin of the name. 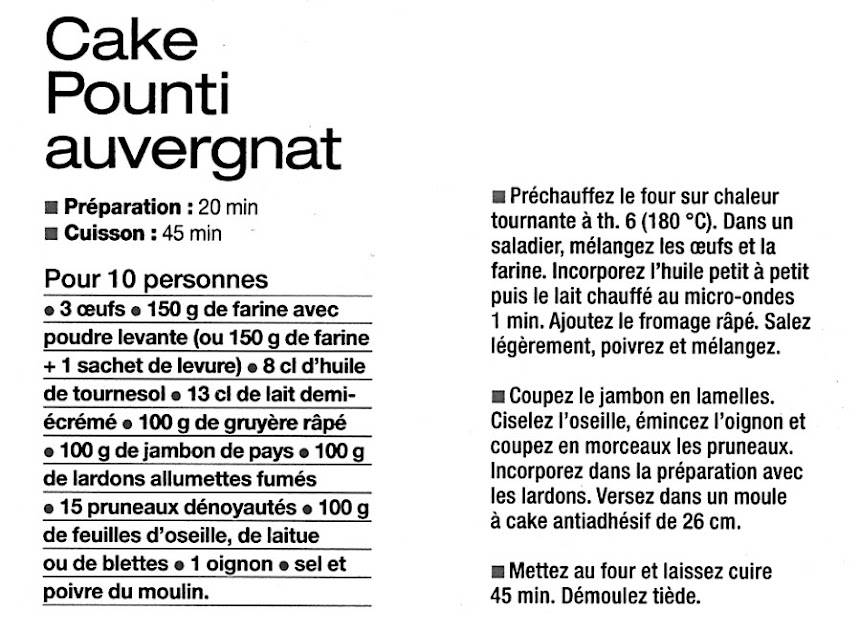 This version of Pounti might be "cakier" than many, but that makes it a good food to serve with an apéritif, especially what is called « un apéritif dînatoire ». That's a light dinner of finger foods that people here in France serve when they want to spend an informal and convivial evening with friends. Savory cakes are popular for such occasions — our version of American zucchini bread, for example, has been a hit in our neighborhood (we reduced the amount of sugar). 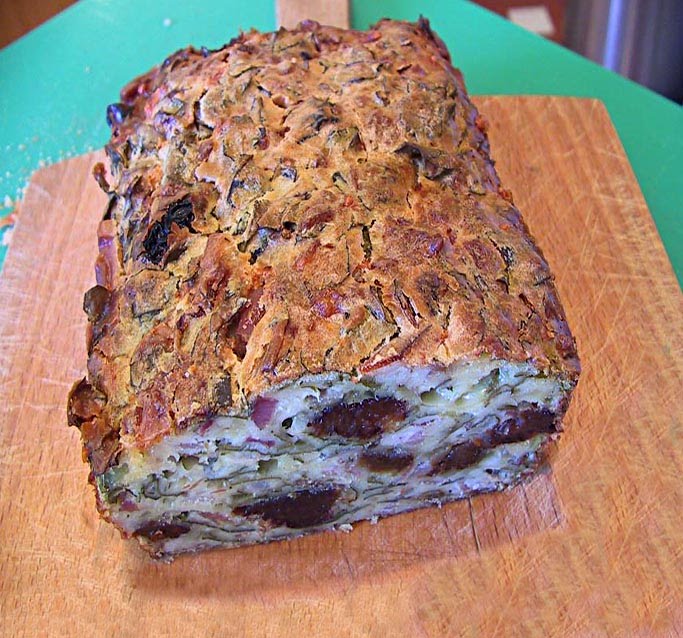 The Pounti I saw in Auvergne seemed to be heavier and wetter than this cake. I read on a couple of Internet pages that one way to eat Pounti is to fry slices of it until they are lightly browned and crispy. Then eat it with a knife and fork as a filling supper dish. I can't see doing that with this Pounti cake.

Here's the recipe in American English:

Preheat a convection oven to 350ºF.

In a mixing bowl, combine the eggs, flour, and baking powder. Gradually stir in the vegetable oil. Warm the milk briefly in the microwave and gradually incorporate it into the batter. Mix in the grated cheese, a little salt, a good amount of pepper.

Chop the onion and saute it lightly in a pan with the bacon (or lardons). Meanwhile, cut the country ham into strips. Chop the chard or other greens roughly, and cut each prune into two or even four pieces.

When the onions and bacon have cooled slightly, mix all the ingredients into the cake batter.

Cook the batter in a buttered or non-stick loaf pan for 45 minutes. Let it cool for 15 or 20 minutes before taking it out of the pan.


Some notes on the ingredients — Prunes these days are not dried to the degree they used to be. Drying allowed them to keep for a long time; these days, you buy them at the supermarket in plastic or cellophane bags and they are still pretty moist and soft. Use them as they are, without soaking them, unless they seem very dry and tough. 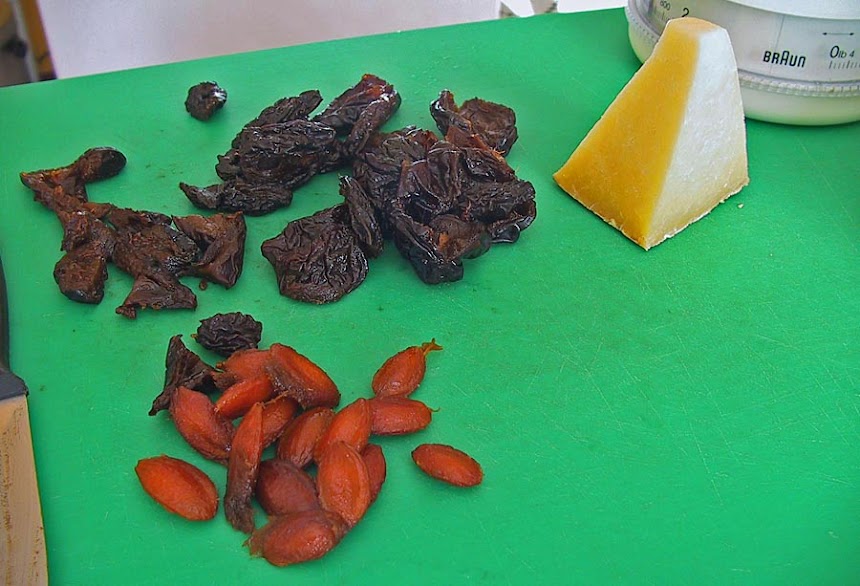 Pitted and chopped prunes, unsoaked,
and a piece of Salers/Cantal cheese

For cheese, the recipe says to use Gruyère. That's classic Swiss cheese, and I'm sure it would be good. But this is an Auvergne recipe, so why not use an Auvergne cheese? I had a piece of Salers cheese left from our trip, and that's what I grated and put in the batter.

If you can get Cantal, good. Otherwise, cheddar would be good. White cheddar is similar to Cantal in flavor and texture. I think the next time I make Pounti I'm going to use a blue cheese from Auvergne, maybe Fourme d'Ambert, in it.

At any rate, after all that, I have to say that cheese is an optional or unconventional ingredient, according to a lot of the Pounti recipes I've found.

Prosciutto, or Parma ham, is fairly similar to the cured hams of the Auvergne region. It's salt cured, lightly smoked, and not cooked. If you buy it in very thin slices, you don't need to cook it before you put it in the cake batter.

Bacon is the other meat in the Pounti cake. The recipe doesn't say to pre-cook it, but I decided to, along with the onion. If you can get smoked bacon, that would be the best. American bacon is often sugar-cured, but I think that would be good in the Pounti. Get thick sliced bacon, cut it into small pieces, and saute it lightly before putting it in the cake batter.

You can vary the quantities and proportions of the meats. Altogether you want 6 to 8 oz. of ham and/or bacon. Chunks of cooked ham would be good, and strips of sandwich ham might be too. You can also adjust the number of prunes to your taste. 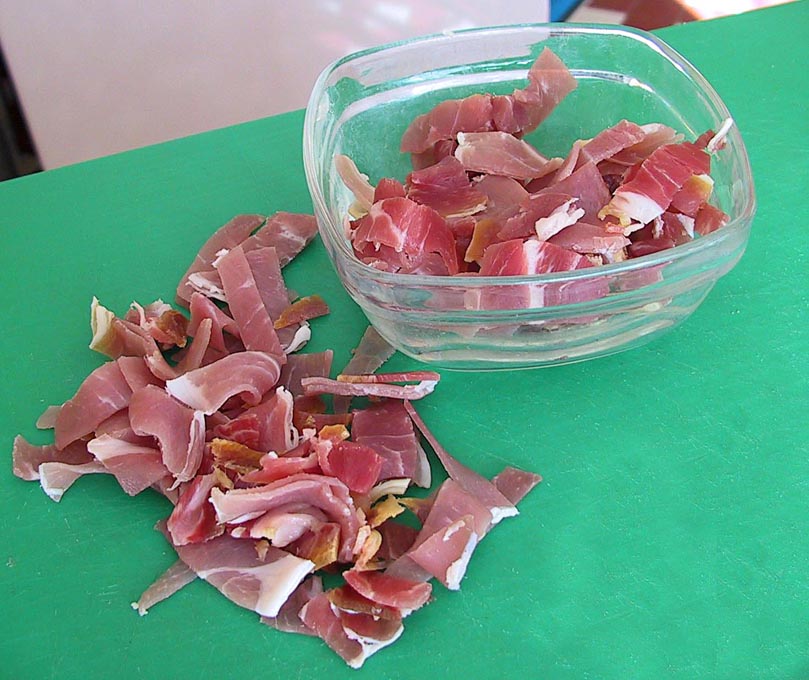 Chopped cured ham slices can go into the batter
without needing to be pre-cooked.

Swiss chard is the preferred leafy green vegetable for the Pounti, but fresh spinach would be very good too. I'm not sure about using frozen spinach, but I might try it one day soon. The recipe says you can use lettuce, but if you do, choose a dark green leaf lettuce, not iceberg.

Finally, the French recipe says to use 2% milk in the batter, but I think whole or skim would be fine too. If you have skim milk, you can always add a tablespoon or two of cream to it. 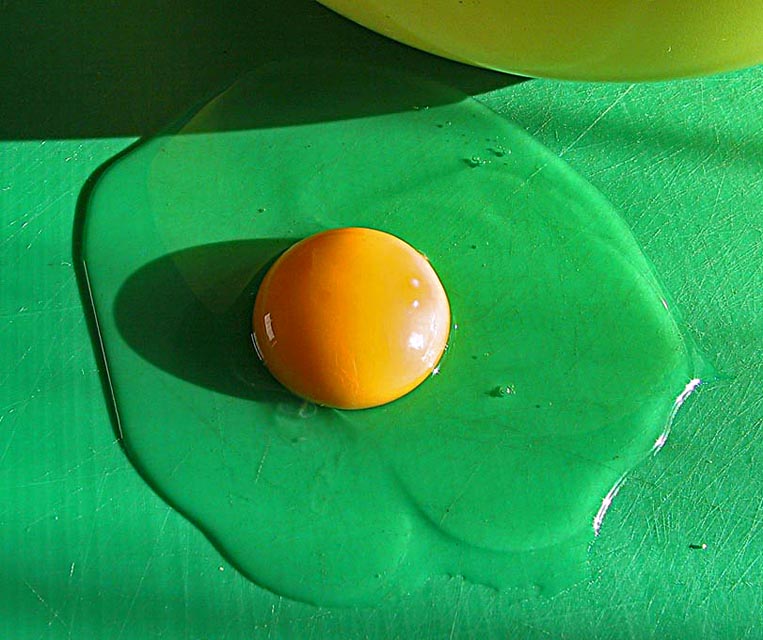 Did you ever crack an egg and have the whole thing
spurt right out of the shell onto the work surface?

A slice or bite-size piece of Pounti cake is really good with a glass of wine, be it white, red, or rosé. The salty, smoky meat; the melted cheese; the slightly sweet prunes; and the just-cooked greens give it a good taste and texture. Pounti is a pre-dinner treat, or it can make a light meal with a green salad. One recipe I saw on the Internet says you can serve it heated up and topped with a little tomato sauce. I'll have to try that combination before I can recommend it.
Posted by Ken Broadhurst at 06:00